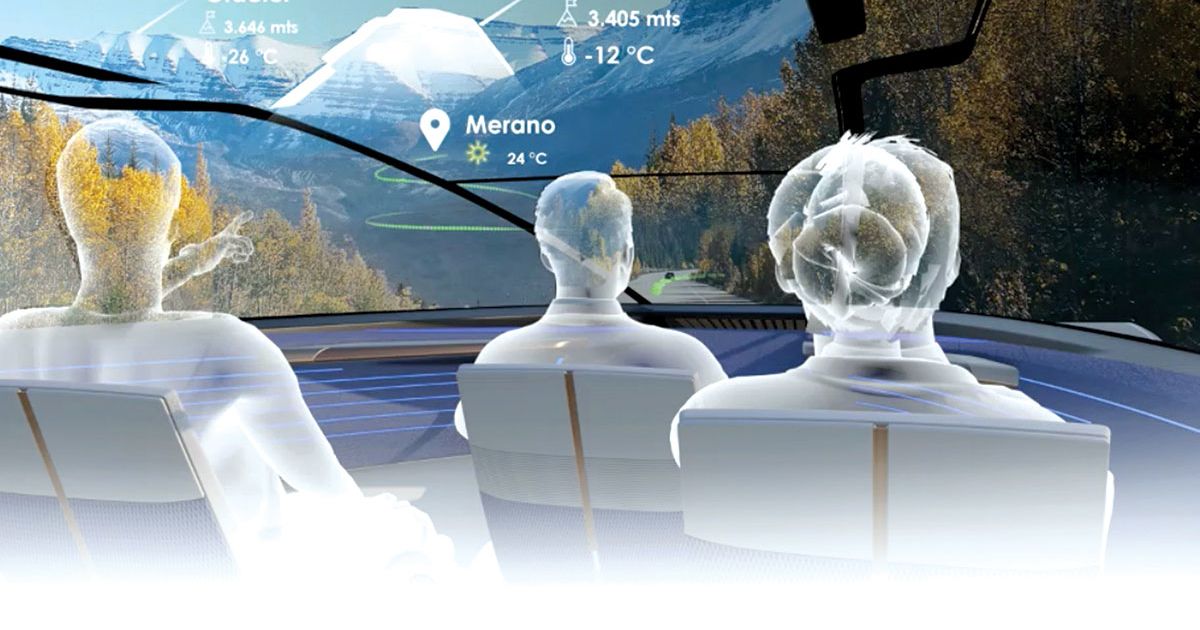 Not only are the ways vehicles are powered and driven changing rapidly, but how drivers and passengers interact with them is certain to change in the coming years.

From technology that can monitor the health of drivers and passengers to augmented reality displays, automakers, suppliers and tech companies have signaled that the car of the future will look and act much differently from those of the past.

Here’s a look at just four of the technologies that could become more commonplace in vehicles between now and 2035.

If and when autonomous vehicles reach roadways in large numbers, information about traffic, weather, places of interest nearby and other important facts could be relayed to vehicle passengers via augmented reality systems. At least that’s according to Italian design firm Pininfarina, which in 2021 revealed its Teorema Virtual Concept Car, designed to showcase what a high-end electric, autonomous vehicle might look like.

The design included an augmented reality system that Pininfarina says can be “aligned with the real world and allow passengers to be informed” about traffic information and nearby curiosities, appearing behind the vehicle’s windshield and side glass. A company rendering shows a vehicle passing in front of a mountain range and glacier, with information about one of the mountains and local weather being displayed on the windshield as the self-driving vehicle passes by.

Pininfarina said passengers would be able to “interact with the information displayed in order to learn more” or to share it with others.

Supplier Mitsubishi Electric in January unveiled an advanced driver-assistance system that it says can monitor the driver’s face, pace of breathing and other signals for signs of a heart attack, stroke or other major health events.

The system is designed to pull a vehicle over to the side of the road if necessary, said Mark Rakoski, vice president of advanced engineering at Mitsubishi Electric Automotive America. But in the future, it could allow health information to be sent to the driver’s doctor for review, he said.

Drivers of the future are likely to find that their vehicles are much more personalized to their preferences.

As IBM noted in a 2020 report previewing what the industry of 2030 might look like, the use of data and the design possibilities that stem from an electric and more connected car will make vehicles “the most sophisticated smart device consumers use.”

EVs — and particularly robotaxis and autonomous shuttles — will make for roomier interiors that could allow for more customizable seating configurations and other options. Pininfarina’s concept vehicle, for instance, has seats that can be folded down to turn into a bench or cot.

Mitsubishi Electric, likewise, said its advanced driver-assistance system could eventually gather enough data on a driver to tell if he or she is relaxed or stressed and make adjustments accordingly.

The system could see that, “it seems like you like this music and it makes you feel comfortable, or you like this ambient lighting to go along with this music,” Rakoski said.

Just as facial recognition has become more commonplace with smartphones, the technology could soon become a frequently seen feature in vehicles over the next decade.

The Genesis GV60 electric crossover, for instance, will feature a “Face Connect” facial-recognition feature that the automaker says will unlock the vehicle’s doors for a driver when it recognizes him or her. It will also adjust seat, mirror and steering wheel positions to the driver’s liking. The feature is paired with a fingerprint system that can turn the vehicle on without the use of a key.

Genesis parent Hyundai Motor Group said facial-recognition systems will be used in the future to monitor the driver’s facial features and pupils to detect high risk of lane departure or other driver errors and make adjustments accordingly.