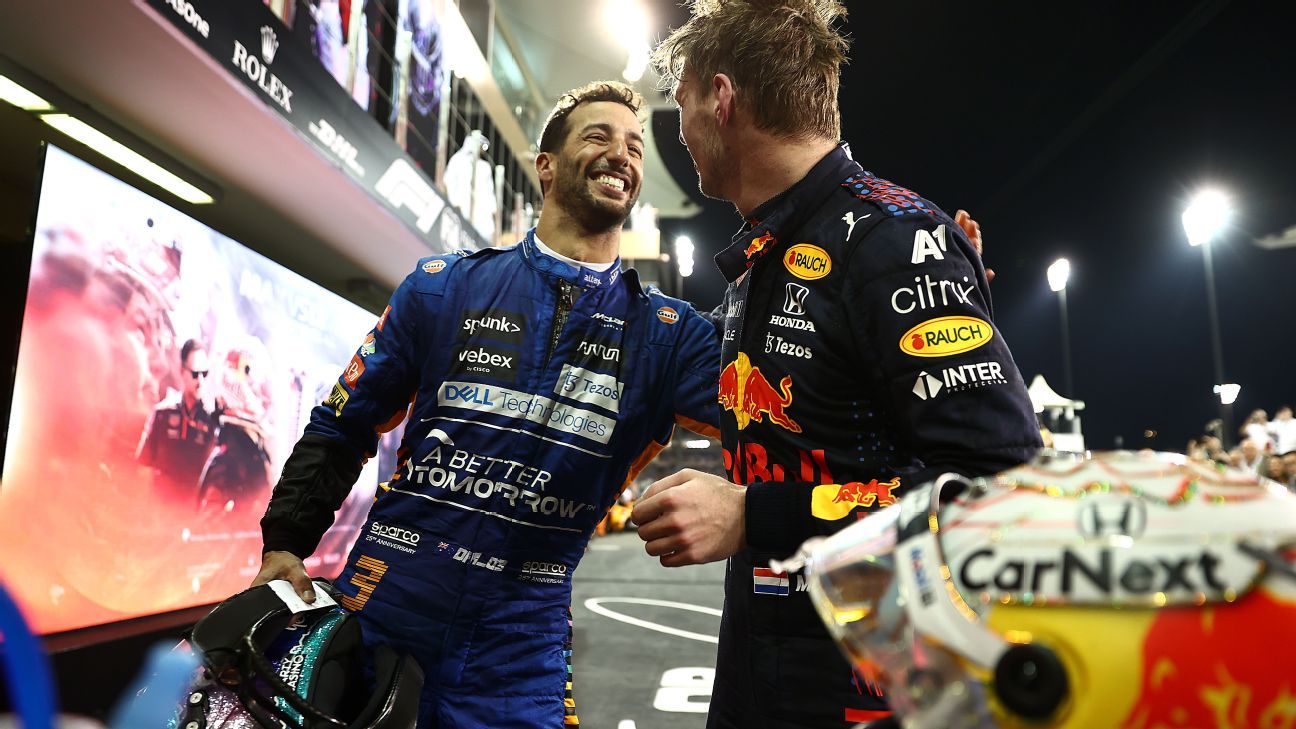 WOKING, U.K — Daniel Ricciardo probably had the best view of anyone in the world of Max Verstappen’s title-winning pass — and the defensive moves which followed — on Lewis Hamilton at last year’s Abu Dhabi Grand Prix.

Ricciardo was sat in the next car back. Controversially, in fact. Ricciardo’s very presence there is a reminder of the questions that still linger from that race.

Unlike the lapped cars which had been between Hamilton and Verstappen behind the safety car in the final laps Ricciardo, and every other lapped car behind him, were not allowed to overtake the leaders and drive back around to join the pack before the race restarted.

Masi’s decision to apply the rules in this fashion did not follow the FIA’s regulations regarding a safety car restart.

That call allowed Verstappen, on brand new tyres, to attack Hamilton, on old tyres, in a one-lap sprint to the finish with no lapped cars in the way. Verstappen overtook the seven-time world champion on the inside of Turn 3 and then defended two Hamilton counter attacks in the corners which followed, fighting off leg cramp as he did so, in one of the most dramatic finishes to an F1 season ever.

Ricciardo, watching from the cockpit of the next car in line, said he felt like a fan again as it all unfolded in front of him.

When told at McLaren’s 2022 car launch he had a pretty good view of what went down, Ricciardo laughed and told ESPN: “Yeah, it was a privilege!

“It was. It’s funny. There was not only one lap to go, my race was… I wasn’t in the race. It wasn’t a great Sunday for me. I was really a spectator on that last lap.

“Even going through Turn 2 and 3 I could see Max was kinda close, I’m like ‘Is Lewis gonna defend, what’s going on?’ I’m pretty sure I saw his light flash like he was clipping, I was like ‘why is he clipping on the last lap?’, I thought he’d have all the battery to use.

“That’s when Max went to pass, I was like, how is this happening!? I was watching as a fan in 2008 [at the Brazilian Grand Prix], the last-lap drama with Massa and Hamilton. It was a lot to process.”

Ricciardo’s post-race messages were broadcast in the aftermath of the finish and gained a lot of traction in the weeks which followed.

After finishing, Ricciardo radioed McLaren to say: “I’ve got no idea what they did with letting cars through. Obviously, I wasn’t really in that anyway, but it seems strange.”

He added: “I’m glad I’m not a part of that — whatever just happened. It seemed pretty f—– up.”

Speaking about that message two months on, Ricciardo said he felt for Hamilton given how he lost the title.

“I was like, man, how would you feel if you’re Hamilton right now? You’re leading, then Safety Car, and then this… woah, it’s a lot to take in.

“After the race my radio was broadcast and I said I’m glad I wasn’t a part of that’. It was too much to handle! So for that reason I was probably glad I wasn’t part of what was going on in Hamilton’s head at that moment.”

Speaking at the launch of McLaren’s 2022 car, Ricciardo said his fellow Australian Masi needs some support in the race director role in order for F1 to avoid a repeat of the finish in Abu Dhabi.