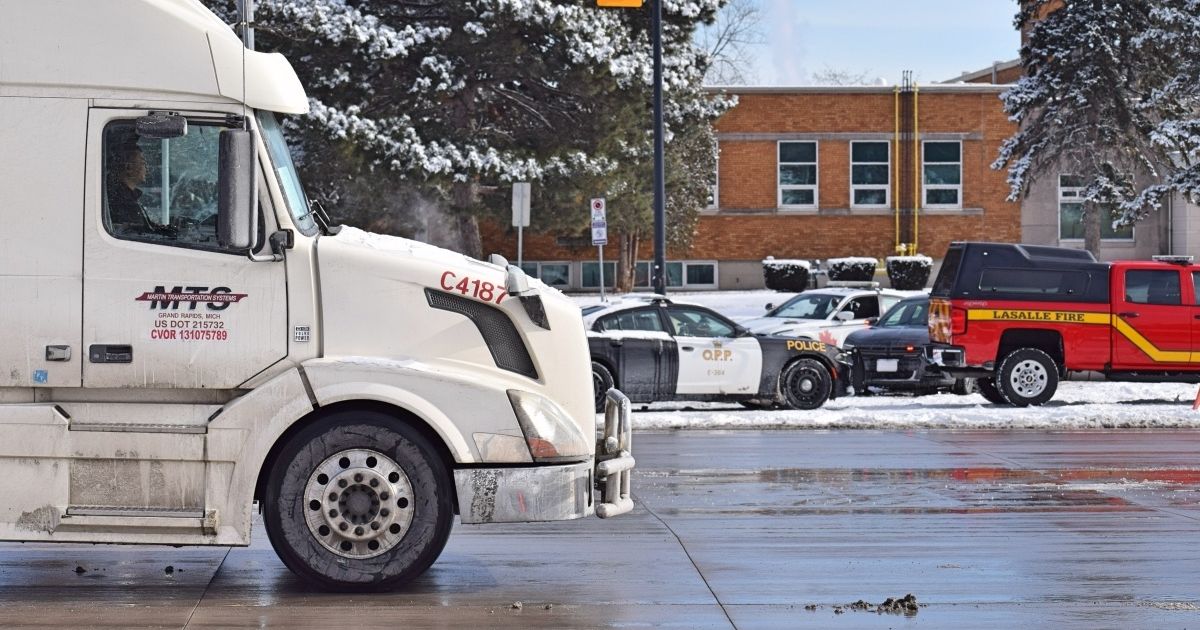 Windsor Mayor Drew Dilkens has declared a state of emergency in an effort to keep trade flowing freely at the Ambassador Bridge on the U.S.-Canada border.

For six days, protestors, demanding an end to vaccine and mask mandates — with some calling for the ouster of Prime Minister Justin Trudeau — blocked access to the key international trade route the North American auto industry so heavily depends on.

The temporary order includes the closure of seven intersections with Huron Church Road and connecting east-west side streets. The move effectively turned the main six-lane road leading to the bridge into a corral from Highway 401, eliminating access from either side.

“It will allow us to deal in real time should something happen in the very near future that we’re all hoping doesn’t happen, with respect to a repeat of what we saw in the last seven days,” Dilkens said at a news conference.

It’s not clear how long the state of emergency is in effect.

The bridge accounts for nearly 30 per cent of annual trade between Canada and the U.S., amounting to a trade value of $323 million daily, according to a recent report from The Canadian Press. The bridge is used by more than 40,000 commuters, tourists and truck drivers crossing each day.

Police from a variety of departments, including the Ontario Provincial Police, are stationed at every affected intersection.

Windsor Deputy Chief Jason Bellaire said police had released all but two of the protesters, who’ve been ordered to remain away from the area. Those arrested came from a “mixed bag,” he said, some were local residents while others came from “many hours away.”

Officers are “looking and listening” to see if protests will erupt at the border crossing again, Bellaire said.

“It is possible people will come back,” he said. “If they do, we will be ready for them.”

About 50 people were arrested, most charged with mischief and the vast majority released with the promise to appear in court and not be found anywhere near the bridge.

Flavio Volpe, head of the Automotive Parts Manufacturers’ Association called it “unacceptable” that so few protestors were arrested and charged with what some might consider minor offenses.

“This is unacceptable. Decisions have consequences,” he tweeted. “This is still a developing story where I sit.”

Brian Kingston, head of the Canadian Vehicle Manufacturers’ Association, representing the interests of the Detroit 3 automakers in Canada, is one of the auto executives calling for more security.

“This blockade has affected the livelihoods of thousands of people in the auto industry on both sides of the border,” Kingston said. “It’s time to take stock of what happened and put protocols in place to maintain an open border for our integrated supply chains.”

“History has taught us that any major interruption with regards to the border has brought in with it new protocols. Anytime the border thickens, the industry is forced to strategically adjust either through new costs or new sourcing,” he said.

“Maybe the $1 billion in unrecoverable automotive production in Canada and the United States — plus the hundreds of thousands of unpaid days for workers — will teach us not to take enforcement of the law for granted.”

Volpe said, “a coincidental bright light is the second bridge soon to rise on the horizon.”

The federal government is currently building a state-of-the-art, publicly owned span southwest of the privately owned Ambassador Bridge. The new Gordie Howe International Bridge will have six lanes of traffic and is set to be complete sometime in 2024.