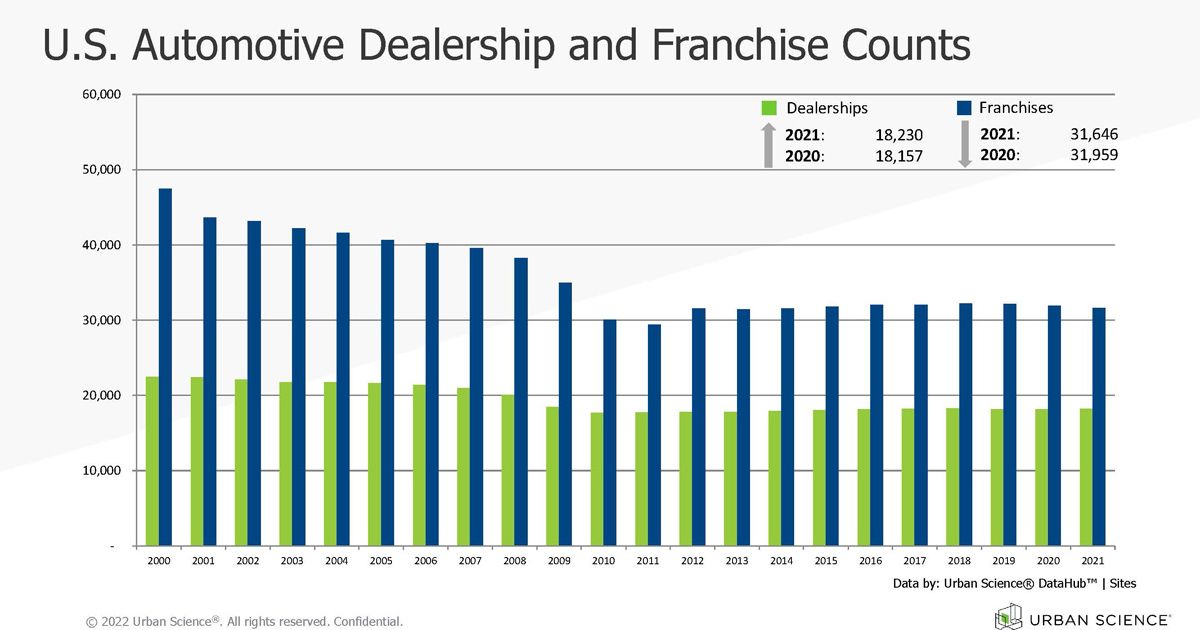 The number of U.S. franchise dealerships ticked back up to 18,230 rooftops in 2021 after two years of declines, according to Urban Science’s annual Franchise Activity Report.

While rooftops grew, the number of franchises operating nationwide fell 1 percent in 2021 to 31,646.

“As the chip shortage resolves and additional inventory levels the playing field for consumers in purchase negotiations, a right-sized dealership network — not a reliance on short-term, pandemic-driven consumer willingness to pay more — will continue to be the underpinning of sustainable success now and in the future,” Mitch Phillips, Urban Science global data director, said in a statement Thursday.

It’s a matter of finding a franchise count which suits regular market conditions, not the outlier years, Phillips explained to Automotive News on Wednesday. The idea is that an automaker “should be designing the network for the middle.”

Overall, both the number of dealerships and the franchise count have been stable for years, based on Urban Science’s data.

Urban Science estimated average “throughput” — the number of vehicles a dealership sells to customers — rose from 807 in 2020 to 826 last year. Drawing on an LMC Automotive forecast, Urban Science predicted each dealership would sell 868 vehicles this year on average — a 5 percent gain.

Prior to the start of the COVID-19 pandemic in 2020, the average annual throughput had exceeded 900 vehicles between 2014-2019. An 868-unit year would represent a performance slightly below 2013’s throughput of 874 vehicles.