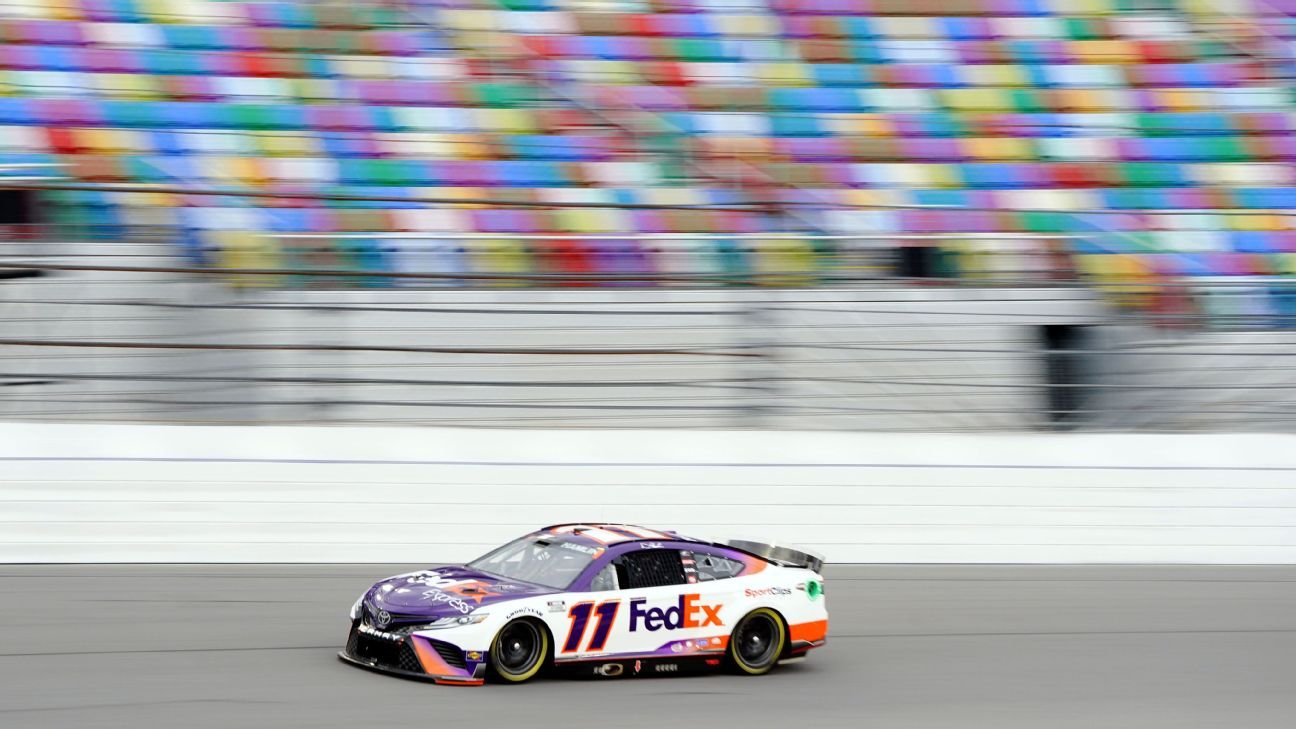 The inhabitants of the paddock are even willing to admit, for the most part, that the modernization that has come with these cars was way overdue. Like, decades overdue. The Gen 6 machines that were sent to the racing retirement village at the end of the 2021 season were, at their metal cores, not much different from Gen 2, dating back to 1967.

But as the planet’s premier stock car racing series has emerged from its admittedly restless winter hibernation, there is no “for the most part” attached to one aspect of the Next Gen debut discussion.

“It’s just, well, it’s kind of weird, man,” explained Michael McDowell, who will race Sunday as the defending Daytona 500 champion, one year removed from one of the biggest upset victories in the 64-year history of the Great American Race, driving for midtier Front Row Motorsports.

“Don’t misunderstand me. I think these cars are great. As a driver for a team that has never had the budget or resources of the big guys, I am for the effort to cut costs and maybe level the playing the field a little. But when you walk into the race shop or even into the garage this week, the vibe is just, yeah, it’s just different.”

Another Daytona 500 champion was a bit more succinct.

“I think we all like the new cars,” said three-time winner Denny Hamlin, who drives for one of those superteams, Joe Gibbs Racing, but co-owns Team 23XI, a new organization that is still trying to keep up. “I think we all just wish that we had more of them.”

That’s the weird part. The dramatically smaller number of race cars, at home and on the road.

Walking through the massive headquarters of multiple NASCAR teams throughout January and February, the sparseness has been striking. At places like Roush Fenway Racing, Stewart-Haas Racing, and Gibbs, where for years there used to be dozens of cars in various states of preparation on the floor at any given time, many for races that were months away, now there is only one car sitting there, maybe two. Seeing more than that is as likely as seeing Chase Elliott or Ryan Blaney riding through those race shops atop a unicorn.

Gone too is a lot of the shop’s trademark noise and bustle. Unfortunately, whenever measures are taken to cut costs, that also means cutting people. The need for scores of fabricators and engineers is not what it was just one season ago.

Hendrick Motorsports even pulled out a handful of older, retired race cars and parked them on the shop floor just to make the place look and feel normal. As one crew member described it, “It threw my equilibrium off, walking through here and it being so empty. Once it filled up a little, my mood definitely got better.”

Whenever a racing series rolls out new rides and regulations, there is a ramping-up period. But Next Gen signifies a move toward what racers call a “kit car,” although the sanctioning body and the three OEMs (original equipment manufacturers, aka the carmakers) don’t much like that term. After decades of in-house parts cranked out by Star Wars-like metal-carving machinery, competing teams now buy parts from the same NASCAR-chosen vendors to be pieced together using NASCAR-written instructions.

That drastically different business model was always going to create a steep learning curve, especially for racing teams, a society that has always been powered by habit and ritual.

“Everything about this Next Gen car is so fundamentally different than anything that has been done before in the sport, so an adjustment period was always to be expected,” explained Mark Rushbrook, the global director of Ford Performance Motorsports. “Teams were always going to have fewer cars. The process of constructing those cars was always going to be simplified. That was the driving force behind so much of this. Unfortunately, there have just been some other forces that have bumped against us.”

Those would be the same “other forces” that have affected every aspect of the lives of all of us, not just NASCAR racers. The pandemic has bogged down the world’s supply chains, causing inventory issues and price spikes for everything from semiconductors to coffee beans.

NASCAR and its OEMs kick-started the Next Gen project in January 2019, back when the idea of a virus-compromised global delivery process seemed like something from a bad sci-fi script. By the time the car’s original debut date — the 2021 Daytona 500 — arrived, everyone was living in that movie in real time. When they pushed that rollout to now, the hope was that the supply chain teams depend on would have returned to pre-2020 speed.

It has not. And now those teams find themselves waiting on parts, especially suspension pieces and body panels.

A four-car team, such as Hendrick Motorsports, typically brings about a dozen race cars to Daytona Speedweeks, two per team in the garage, a primary and a backup, plus a handful of spares kept elsewhere in town should the team get caught up in multiple wrecks during the 150 qualifiers or the multiple practice sessions. It happens.

This year, teams have brought about half that many, but still the shops back in North Carolina are empty. There, personnel are bracing themselves for a round-the-clock turnaround effort to get their Daytona cars — or what’s left of them — refurbished and reloaded into the 18-wheelers for the next weekend’s trip to Fontana, California, the start of a three-week West Coast swing.

The good news is the Next Gen is a one-size-fits-all race car. In the long run, that will save millions of dollars. The bad news is that, because of the trickle of parts and pieces, teams don’t expect to have a genuine fleet of race cars built until at least late May.

As a result, many of the same cars that teams ran on the tiny quarter-mile L.A. Coliseum short track for the Feb. 6 Busch Light Clash exhibition event will likely make an appearance on the much-larger 2.5-mile Daytona International Speedway this week. In years past, in the age of specialty-built cars, that was impossible. This year, at least for now, it isn’t just possible, it’s necessary.

So, will that alter the way that teams race this week? It certainly did in Los Angeles, when drivers who fell out of contention undoubtedly soft-shoed their way out of danger to save their sheet metal for the start of the season.

“We used to come down here [to Daytona] with one or two backup cars for each [driver] just in case things happen,” Blaney said during Wednesday’s Daytona 500 media day. “Now we’re sitting on a couple for your whole organization. That’s been difficult, and you have to have that in the back of your head.”

When asked about Thursday night’s 150s, which will determine the starting order of the Daytona 500, Blaney said he expected everyone to err on the side of caution to avoid ending up with a bunch of cautions.

“I think guys are going to be pretty smart on kind of how they race; you’d hope so because everyone’s kind of sitting in the same boat. You have to be aware and observant. But you don’t ever want to wreck your 500 car, let alone when we don’t have many things to spare.”

As for the Daytona 500 itself, the biggest single race of the season and an event that has become known for “the Big One” multicar crashes in the closing laps?

Blaney smiles. “All of that I just said, all that reason and measured adult thinking, that never applies to the Daytona 500. Certainly not when the checkered flag is in sight.”