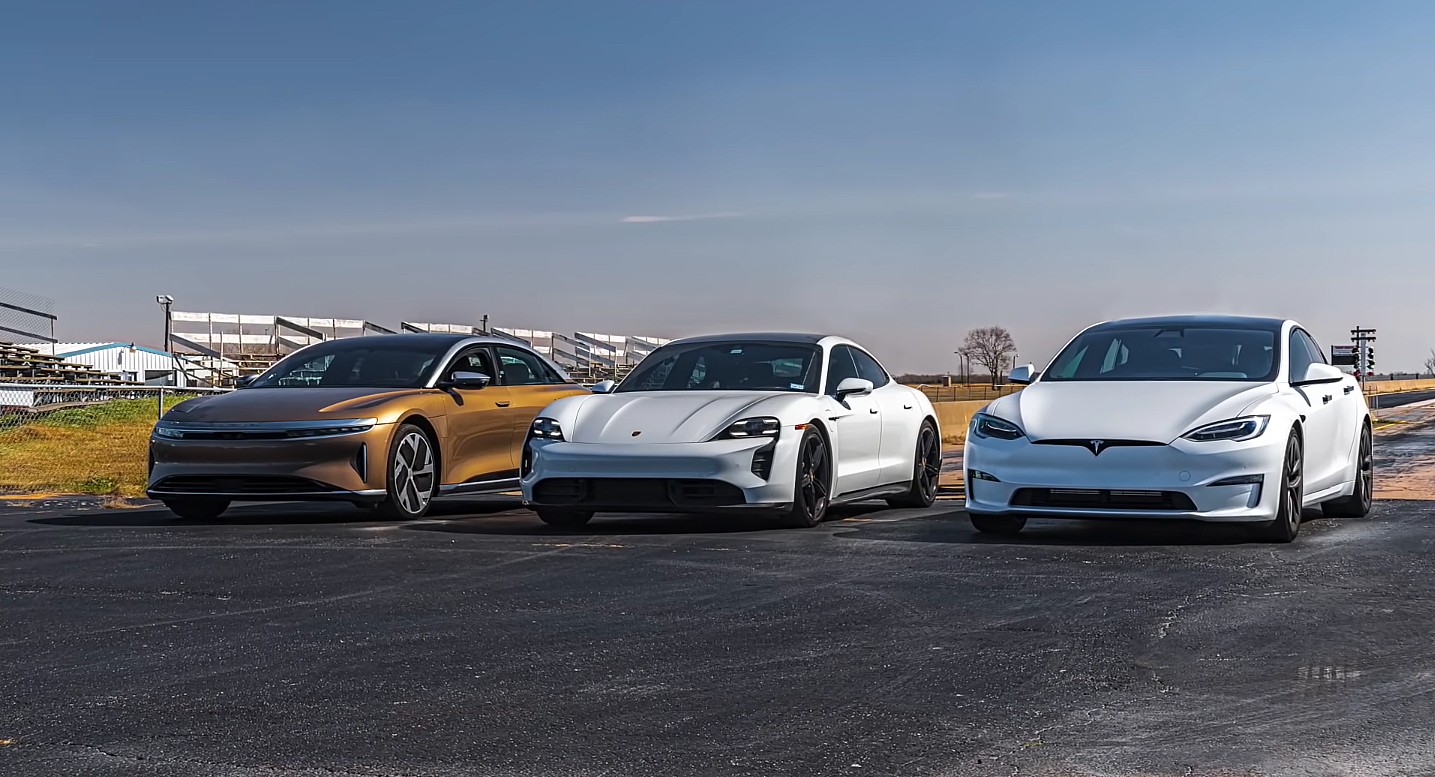 There was a time when the Porsche Taycan Turbo S was considered extremely quick. Being one of the few cars that could beat the Tesla Model S P100D with Ludicrous Mode in the drag strip, the Taycan was the car that proved that veteran carmakers should not be ignored in the electric vehicle race. It’s a beautiful vehicle, it handles like a Porsche, and it’s devilishly fast.

But that was before the arrival of the Tesla Model S Plaid. With three electric motors and over 1,000 horsepower, the Model S Plaid was a completely different animal. And even with new competitors like the Lucid Air Dream Edition, which was recently tested to be capable of completing the quarter-mile 10.21 seconds at 143.37 mph, the Plaid seems like it exists in a league of its own.

And this, ultimately, was proven in a recently posted video from Brooks Weisblat of the DragTimes YouTube channel. After featuring the Lucid Air in three videos so far, the veteran drag racer opted to race the newcomer against both the Tesla Model S Plaid and the Porsche Taycan Turbo S. A triple-threat race is always fun, but when it involves three of the world’s quickest sedans, then things become very interesting.

The three vehicles are pretty different on paper. The Lucid Air Performance Dream Edition is listed with two electric motors that make 1,111 horsepower and a weight of 5,236 pounds. It also costs a hefty $170,000. The Taycan Turbo S is a Porsche through and through, with its two electric motors that make 750 horsepower, 2-speed transmission, and its weight of 5,300 pounds. It’s also the most expensive of the three at $218,000 for the specific trim featured in the video.

Compared to its two competitors, the Tesla Model S Plaid seems to be a completely different beast. It features three electric motors that make 1,020 horsepower and it weighs 4,833 pounds, making it the lightest of the three. This is quite interesting since the vehicle is a full-sized family sedan. It’s also the most affordable at just around $130,000 before options. Also interesting was that the Plaid had the lowest state of charge during the race with its 82% battery. The Lucid Air had 86% of its battery left, and the Taycan Turbo S had 90%.

The three vehicles engaged each other in three separate races: two standing drag races and one rolling race. And in each bout, the Tesla Model S Plaid completely dominated its competition. It’s pretty amazing to see in DragTimes‘ video, but the Plaid almost made the Lucid Air look moderately quick, and the Taycan Turbo S look like it was standing still. Based on these results, it would seem like the only vehicle that could soundly beat the Model S Plaid today for now is the Rimac Nevera, and that’s an all-electric hypercar worth millions of dollars. Among fellow performance sedans in its price range, it seems that the Tesla Model S Plaid is near-untouchable.

Watch the Tesla Model S Plaid battle with the Lucid Air and the Porsche Taycan in the video below.

Tesla Model S Plaid races two of the world’s quickest sedans. The results were not close