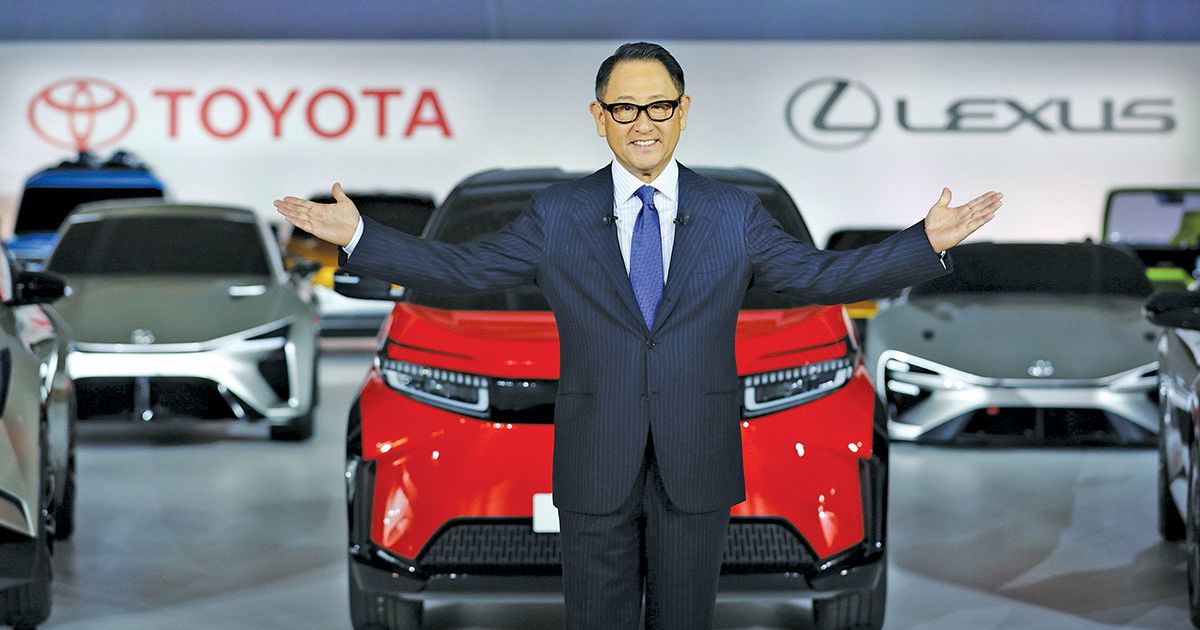 TOKYO — EV latecomer Toyota hasn’t even launched its first serious electric vehicle yet. But the company is already preparing a full fleet of all-electric cars for the day its EVs go mainstream.

That time is not so far away. By the end of the decade, Toyota plans a wide EV lineup encompassing pickups, sports coupes, sedans, luxury cars, urban runabouts, even delivery trucks.

President Akio Toyoda opened the curtain on a diverse 16-vehicle lineup in December. It was a dramatic riposte to critics who said his company was too slow and timid on battery electrics.

The plethora of new prototypes and mockups — parked on stage as full-size 3D models, not teased as digital renderings as some rivals have done — was meant to show just how serious Toyota really is.

The divergent designs of the cars on display said a lot about Toyota’s new EV roadmap.

Global design chief Simon Humphries says that EV diversity, in both form and function, will be key to delivering Toyota’s amped-up pledge to sell 3.5 million electric vehicles a year by 2030.

“Globally, there is an incredible diversity of customers, and their desires are what we cater to,” Humphries told Automotive News in his first interview about the newly minted EV design strategy. “Diversity is a necessity for the future.”

Toyota’s proposed EVs underscore one of the challenges faced by all legacy full-line automakers as the industry rapidly goes electric. While new industry entrants such as Tesla can skim customers with lineups as lean as four nameplates, old-guard players are anchored in multiple segments and markets — the trick for them is keeping all those customers in the EV shift.

And as the world’s biggest automaker, Toyota Motor Corp. has the most customers to lose. Hence, Toyota’s grand unveiling was a sneak peek at what it will look like as a full-lineup EV maker.

“It’s down to the market and the customer,” Humphries said. “The important thing is that you’re covering how people expect to use the vehicle. It would be counterproductive to produce 80 cars all looking the same. Diversity is something to be celebrated.”

Toyota will go futuristic and emotional with its upcoming bZ line of dedicated EVs. But it will then dial back to more traditional looks as its EV offerings spread out into more segments. When it comes to Lexus, the guiding principle will be “go low,” as designers seek a planted, sporty stance. Performance will be enhanced by solid-state batteries.

When President Toyoda pulled the wraps on the upcoming EV lineup at the company’s MegaWeb showroom on the Tokyo waterfront, he did it with a bit of flare.

First, he presented five EVs from the new bZ subbrand, including a preproduction prototype of the first entry, the bZ4X crossover, due later this year. Then he surprised his audience with a full lineup of 11 more EVs hidden behind a curtain. They comprised four Lexus entries, including a prototype of the Lexus RZ crossover expected to debut this spring, and seven future Toyota offerings.

“The cars that you are looking at right now, many of them will be launched into the market very soon,” he said of the battery electric vehicles. “Are we really backward looking in terms of BEVs?”

Toyoda said the presentation previewed 30 EV models his company will sell globally by 2030. And in answer to critics who have said that Toyota is moving too slow in the field, Toyoda targeted annual sales of 3.5 million EVs by the end of the decade, up from an earlier target of 2 million. Some 1 million of the new EVs will carry the Lexus logo, as the company’s premium marque transitions to being electric-only in the U.S., Europe and China.

“Some people say Toyota is not interested in EVs — that’s what we hear a lot,” Toyoda said. “But when you think of the volume [of EVs] we are talking about, it’s a huge volume.”

Toyota wants to deliver that volume with a wide range of nameplates. The full-lineup approach contrasts with that of new EV entrants such as Tesla, which has managed to generate global volume of 1 million by selling only four nameplates.

But other critics doubt the wisdom of adding such cost and complexity while breaking into the new segment.

Nissan Motor Co. and partners Renault and Mitsubishi were questioned about this in January when they announced plans to launch 35 EVs across the alliance in the next five years.

Why the need for such diversity, when surely the real goal is profit not volume?

Nissan COO Ashwani Gupta said the alliance already has a presence in virtually every global market, with a lineup close to 100 models. The companies simply can’t walk away from those customers in the EV shift.

“It’s about how we can cover 100 percent of the geography around the world,” Gupta said.

Toyota is taking a similar view, and it can be seen through the new design plans.

While Nissan demonstrated its EV ambitions with numbers in a PowerPoint presentation and computer renderings of four vehicle concepts, what made Toyota’s presentation unique was its splay of 16 full-size models you could reach out and touch.

The job of bZ — shorthand for Beyond Zero — is to generate buzz and win over early adopters with high-tech styling that is futuristic and emotional, Humphries said.

It ditches a radiator-grilled front end for a sleek filled-in look reminiscent of Tesla, and gets slimmed-down headlights that are integrated with blacked-out housing space for sensors. This all blends into a “hammerhead” motif that wraps around the nose of the vehicle.

Long wheelbases, with the wheels pushed to the corners, open interior space and allow for better access to the rear seats because the wheel well doesn’t cut as far into the door. Inside there are futuristic flourishes, such as the newly adopted yoke-style steering handle in the bZ4X.

“From the outset, the bZ series sets a flag in the sand to say this is a dedicated EV platform with EV-like design,” Humphries said. “There needs to be a statement to attract people.”

But as the years roll on, as EVs go more mainstream, they will also fill more niches. Toyota is betting customers won’t necessarily gravitate to a look that screams high-tech.

Enter the full array of body types from sports cars and sedans to pickups and pod cars.

These vehicles, represented by the third row in Toyota’s grand unveiling from December, get designs that are funky but more utilitarian, created with more of a form-follows-function ethos.

They encompass a Compact Cruiser EV reminiscent of a miniature FJ Cruiser, an all-electric pickup, a slippery sports car, more crossovers and even dedicated commercial vehicles called the Micro Box and Mid Box. Toyota lumps in the e-Palette electric people mover for good measure, though it was too tall to fit through the stage doors for December’s presentation.

“Those types of things will really define how the car should look and act,” he said. “People want something matching their chosen direction. So, Toyota as a maker has to supply it.”

Vehicles in the bZ series, for instance, get a higher and more upright stance. That’s because they will ride on today’s lithium ion batteries, which require a lot of space and raise the floorboards.

But Toyota is now confident it will crack solid-state batteries. Because those are lighter and more compact, they will open new possibilities — especially for Lexus, where driving dynamics will be paramount.

Tomorrow’s Lexus designs will feature an ultralow center of gravity and other performance-enhancing tweaks, such as sheet metal tricks that boost downforce or increase aerodynamics.

The poster child for that new Lexus look is the BEV Sport, a low-slung piece of eye candy that is inspired by the LFA, the $375,000 Lexus super sports car discontinued in 2012 after a production run of just 500. Lexus envisions the EV reincarnation as delivering a 700-kilometer (435-mile) range and stomach-churning 0-to-60 mph time in the low two-second range. But its proportions and performance will likely be enabled by the compact packaging of solid-state batteries.

On stage in December, the BEV Sport was joined by three other Lexus models, including the upcoming RZ, a larger SUV and a sedan. But in separate teaser photos, Lexus also depicted what looks like a convertible coupe and two wagon-style offerings evoking the Porsche Panamera.

Lexus design will be informed by Toyoda’s directive to reshape the brand around motorsports.

“It’s not about lip service to the racing circuit,” Humphries said. “It’s about approaching the way the vehicle architecture is designed from a motorsports perspective.

“The functional aspects of that follow through into design. Aerodynamics, downforce, all those issues with high-performance vehicles aren’t hidden; they’re embraced,” he said.

The multipronged approach Toyota envisions for EVs mirrors its overall powertrain strategy. Even as it prepares to sell 3.5 million full electric vehicles, it still plans to sell millions more hybrids and hydrogen vehicles on the road to carbon neutrality as the automaker tries to satisfy its far-flung international customer base.

“It is a diversified market that we are dealing with,” Toyoda said at the December event. “Therefore, as we are in an uncharted era with lots of uncertainty about the future, we want to take a diversified approach. That is why we have worked hard to maintain our full lineup.”