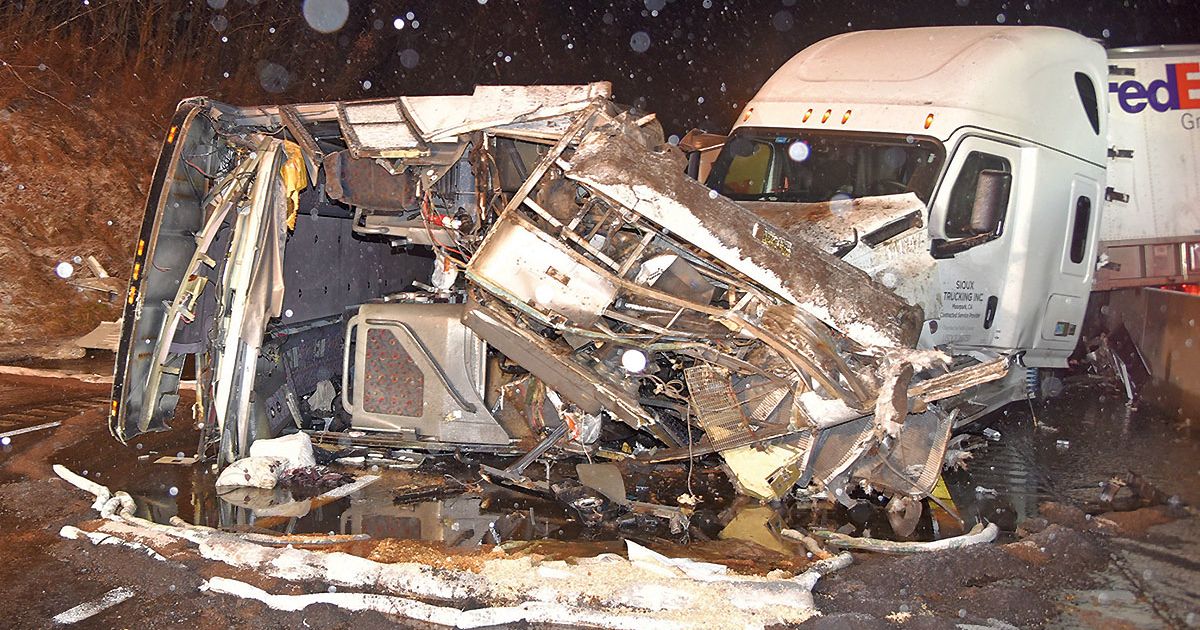 A fatal Pennsylvania bus crash has brought renewed calls for salvaging a safety technology that once held the promise of saving thousands of lives on U.S. roads.

On the night of Jan. 5, 2020, five people were killed when a speeding bus overturned on a wet highway near Mount Pleasant, Pa. Three trucks and a passenger vehicle subsequently collided with the bus or each other in the immediate aftermath.

Had the vehicles been equipped with connected technology that enabled them to exchange messages about deteriorating road conditions or the imminent hazard presented by the overturned bus, the crashes may have been avoided or their severity diminished.

That’s one conclusion from a National Transportation Safety Board report issued this month. In recommendations stemming from the crash, the board pushed federal regulators to develop performance standards for connected-vehicle technology and mandate its inclusion in new vehicles.

That, of course, is nothing new.

The NTSB made the same recommendations in 2013, and NHTSA took no action. In the meantime, the fledgling promise of such communications — known through the auto industry as vehicle-to-everything, or V2X — has languished.

One recent reason for the struggles toward meaningful adoption involves a November 2021 decision by the Federal Communications Commission that stripped the auto industry of more than half the wireless spectrum reserved for the transmission of these safety-related communications.

That decision has left automakers and infrastructure providers unsure of what safety messages can be deployed on the remaining 30 MHz of that wireless spectrum, whether operations on other bands would interfere with the transmission of critical safety messages and, more generally, how to proceed.

“It’s really unfortunate that we’re in a situation where we’re now having to choose between what life-saving applications we’re going to be able to fit in a limited-spectrum environment,” said Laura Chace, CEO of the Intelligent Transportation Society of America, a Washington, D.C., nonprofit that advocates for transportation technology.

Last summer, the ITSA and the American Association of State Highway and Transportation Officials sued the FCC in a bid to overturn the decision to reallocate 45 MHz for nonsafety use cases. That lawsuit remains ongoing.

In the meantime, Chace said the ITSA has brought together a group of industry supporters to consider what safety messages and applications could still be utilized on the reduced spectrum. Research continues, but Chace worries interference from other devices on adjacent bands may be a serious problem.

“A lot of our efforts are heavily focused on ensuring that remaining 30 MHz is actually free from interference, and to be totally frank with you at this point, we do not believe it is,” she said.

Even if it is interference-free, experts believe the number of features they can initiate on that bandwidth will be reduced, and particularly stymie efforts to prevent pedestrian deaths.

“The fear is some of the applications we value most would not function in high-volume areas,” said Mark Knellinger, a transportation solutions architect at Cisco. Spectrum reduction “really has got me concerned with our ability to take care of pedestrians and other vulnerable road users.”

A setback in efforts to better protect pedestrians would come at a time when they’re being killed in staggering numbers.

More than 6,700 were killed in 2020, according to the Governors Highway Safety Association estimates. That represented a 4.8 percent year-over-year increase. But considering that the number of miles traveled in the U.S. dropped 13.2 percent, the organization said the 2.3 pedestrians killed per billion miles traveled represented a 21 percent increase from 2019, the highest one-year jump since NHTSA began keeping records in 1975.

Automated driving might be another area hindered. Right now, many believe V2X messages could provide important information that can be factored into decisions made by self-driving systems.

Such an application is not yet practical for automated-driving testing in the United States, but it’s already happening in Chinese cities. Information on pedestrians and other road users at intersections can be captured from V2X systems affixed to traffic lights and broadcast to nearby robotaxis. It’s one way China has jumped to the vanguard in terms of connected-car technology.

Beyond robotaxis, China became the first country to establish a national strategy for connecting ordinary cars, according to a white paper published in 2021 by 5G Americas, an industry trade group.

Nearly 90 cities have partnered with local wireless operators there and deployed tens of thousands of roadside units equipped to transmit messages.

Ford Motor Co. said in 2021 it was the first automaker in China to commercially deploy cellular-based V2X technology in production, in both the Ford Explorer and Ford Edge Plus models.

“If you think about the problem that we’re trying to solve, China looked at it and said, ‘Yeah, that’s a good idea, we can make the highways more intelligent and provide highway-initiated driver assistance for people to be safer,’ ” said Nakul Duggal, senior vice president and general manager of Qualcomm’s automotive business. “It sounds like something we should go do. Get it done. I don’t know why we’re not able to get out of our own way, frankly.”

Meanwhile, European regulators are moving forward with plans to make automated emergency braking capable of being triggered by V2X-based messages by 2025 in their New Car Assessment Program protocols.

It was not only the FCC decision that stalled developments in the United States. Vehicle-to-vehicle communications have been under development in some form or fashion since RCA pioneered basic technology in the 1950s, and they accelerated in the 1990s. But over the past decade, automakers squabbled with one another regarding the particular method — dedicated short-range communications or cellular — they’d use to transmit the safety messages.

A failure to choose a particular direction left deployments in a vehicular purgatory. If it had been available, messages from the bus near Mount Pleasant, Pa., could have warned the approaching trucks and car of the hazard. Warnings about falling snow and slick roads could have reached the bus before it rounded a curve on the Pennsylvania Turnpike. The crash perhaps exemplified both the promise and the fatal cost of delays.

“People are able to respond much more quickly for a situation where a radar-based system or camera-type systems are really challenged,” Robert Molloy, director of the NTSB’s Highway Safety Office, said on this week’s Shift mobility podcast. “The idea of cars talking to each other really solves a lot of problems.”