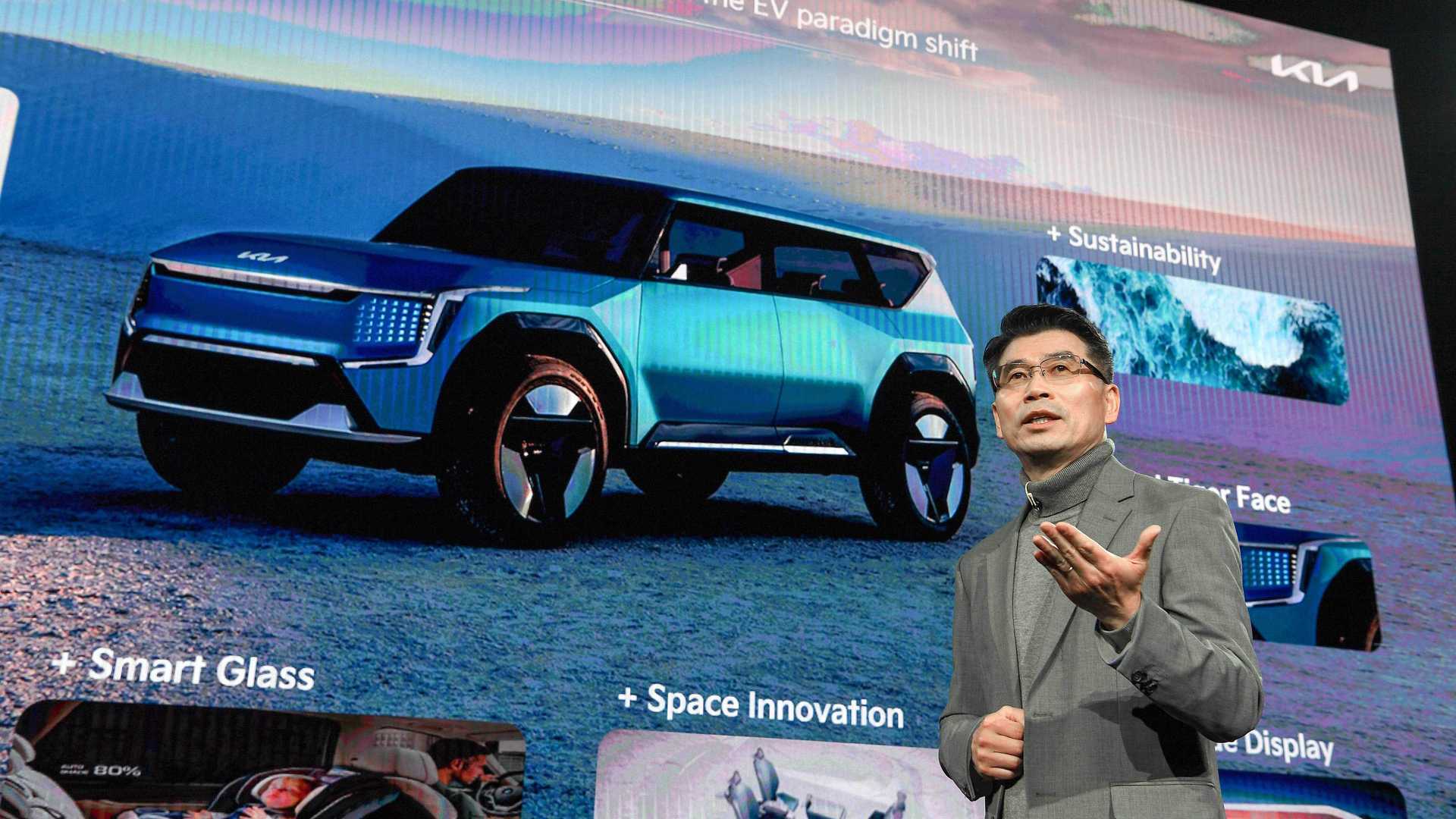 Kia announced at the company’s 2022 CEO Investor Day virtual event, its new strategic plan referred to as the roadmap to 2030, which reveals accelerated transition to EVs.

This plan has been released in parallel to the one announced by Hyundai/Genesis (all three brands are part of the broader Hyundai Motor Group).

The South Korean manufacturer expects that by 2030 its global sales will increase to about 4 million units annually. More than 2 million (or 52%) will be “eco-friendly” models, including 1.2 million battery electric vehicles (30% of the total).

In specific markets (with strong environmental regulations and a growing demand for EVs), Kia expects to achieve an “eco-friendly” share of 78% of the total volume. Those markets include Korea, North America, Europe and China.

Geographically, by 2030, over 80% of all Kia BEVs will be sold in Korea, North America, Europe and China. In those markets, BEV share out of Kia’s total volume will be about 45% (average).

One of the most interesting points for us is the plan to expand the lineup to 14 BEV models by 2027. Starting in 2023, the company intends to introduce at least two new BEVs per year.

Next year, the company will launch an all-new, large flagship SUV model called the Kia EV9.

Considering 1.2 million BEVs, it would be close to 100 kWh per battery pack, on average, but that’s just a raw estimation. Some of the batteries might be used in plug-in hybrids and hybrids, so the average for BEVs most likely will be lower.

Kia will source batteries from various suppliers. An interesting thing is that the plan includes a 50% increase in energy density and a 40% decrease in cost by 2030:

“Kia plans to supply batteries from the Indonesian battery cell joint venture and will simultaneously establish a stable battery supply and demand system by outsourcing to global battery companies.

In addition, the company plans to increase battery energy density by 50 percent by 2030 and reduce system costs by 40 percent, thereby enhancing both performance and price competitiveness.”

Kia’s facilities in South Korea will carry the primary role in the transition to electric vehicles. However, the company would like to produce all-electric cars in various other markets as well.

Kia announced that from 2025, all new vehicles will be equipped with “class-leading” connected car features. That includes Over-the-air (OTA) software updates and Feature-on-Demand (FoD) services.

Starting in 2023, with the Kia EV9, the company will introduce “AutoMode”, a new range of autonomous driving technologies.

“Kia AutoMode supports performance optimization through wireless updates and will be improved as the technology develops. It will also include Highway Driving Pilot feature which would enable driving without driver intervention on highway sections.”

AutoMode will be available in all new models launched in major markets by 2026. In the long-term, the company plans to upgrade this feature and at some point implement fully autonomous driving technology.

Initially, the first PBVs will be derived from current models such as Niro Plus, due to be introduced later this year. However, in the mid- to long-term, the company will develop dedicated PBVs based on a flat, skateboard EV platform. The first dedicated PBVs are expected in 2025. 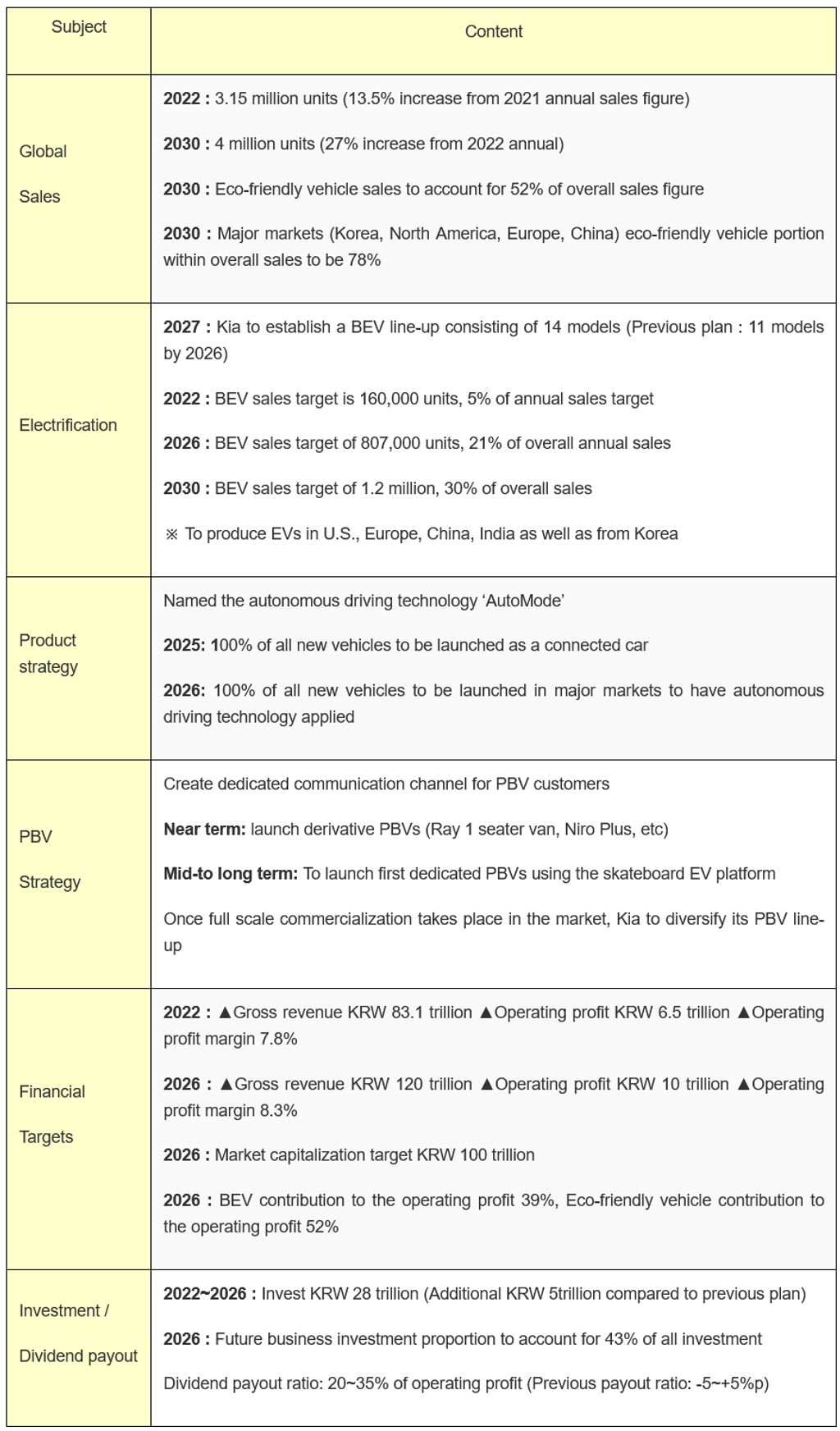