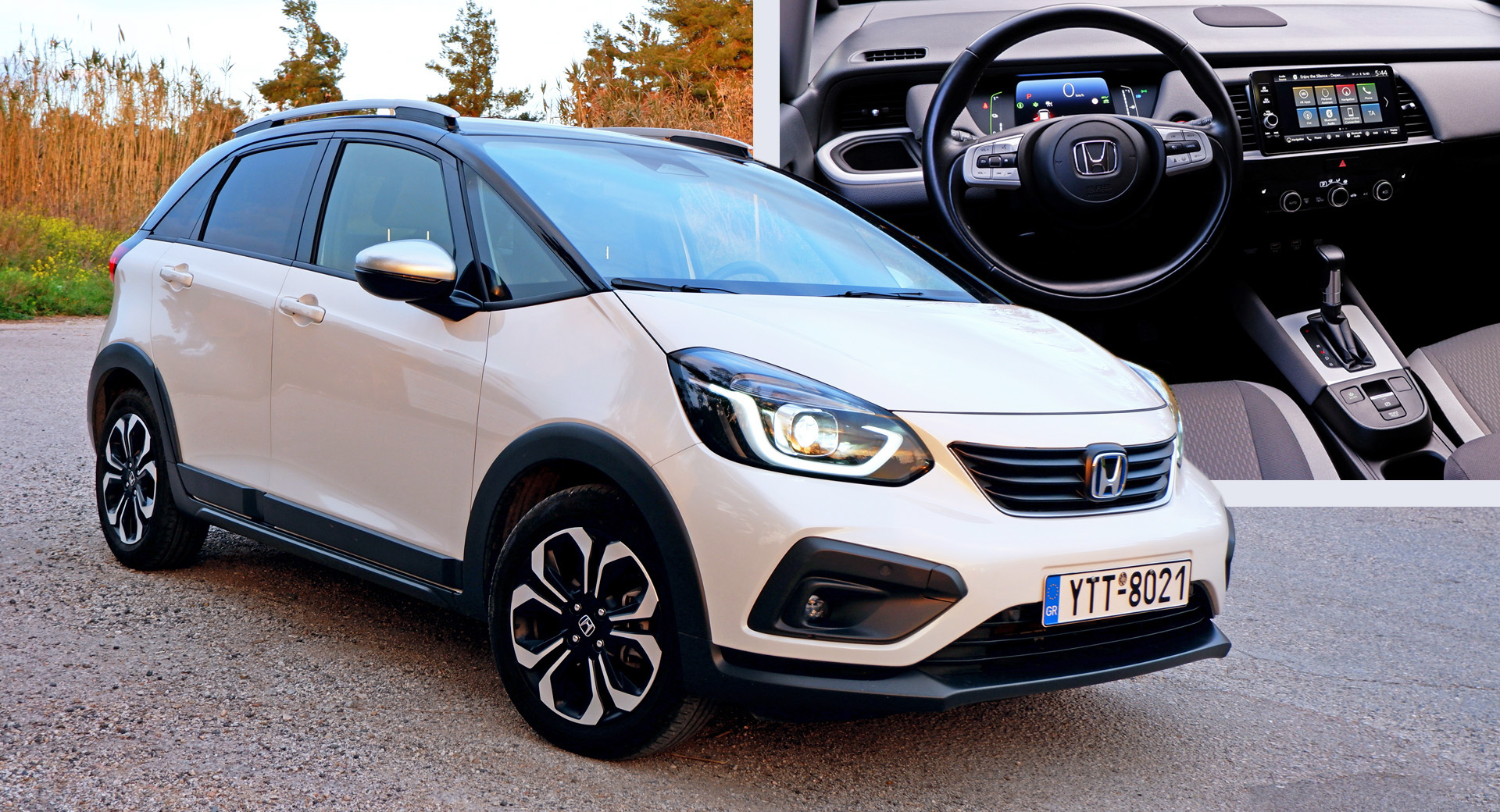 From its first generation in 2001, the Honda Fit/Jazz was a different kind of supermini, with a focus on practicality and an MPV-infused character. Two decades later, the fourth generation has improved the same formula, with the Crosstar variant adding an SUV flavor into the mix. So did Honda hit the nail in the head by mixing elements of the small hatchback, MPV, and SUV segments? How does this hybrid model compare with more conventional rivals? We drove it for a week and have all the answers.

Bridging The Gap Between Superminis And B-SUVs

Design-wise it is easy to tell apart the Jazz Crosstar from the regular Jazz, despite sharing the vast majority of their body panels and the MPV-style one-box silhouette. A healthy dose of plastic cladding all around the bodywork is the obvious starting point for every car trying to look “crossoverish”, but Honda went further by installing version-specific bumpers and a distinct grille. The latter, in combination with the larger decorative intakes, diminish the cute panda-like appearance of the standard Jazz making it more rugged and adventure-ready. 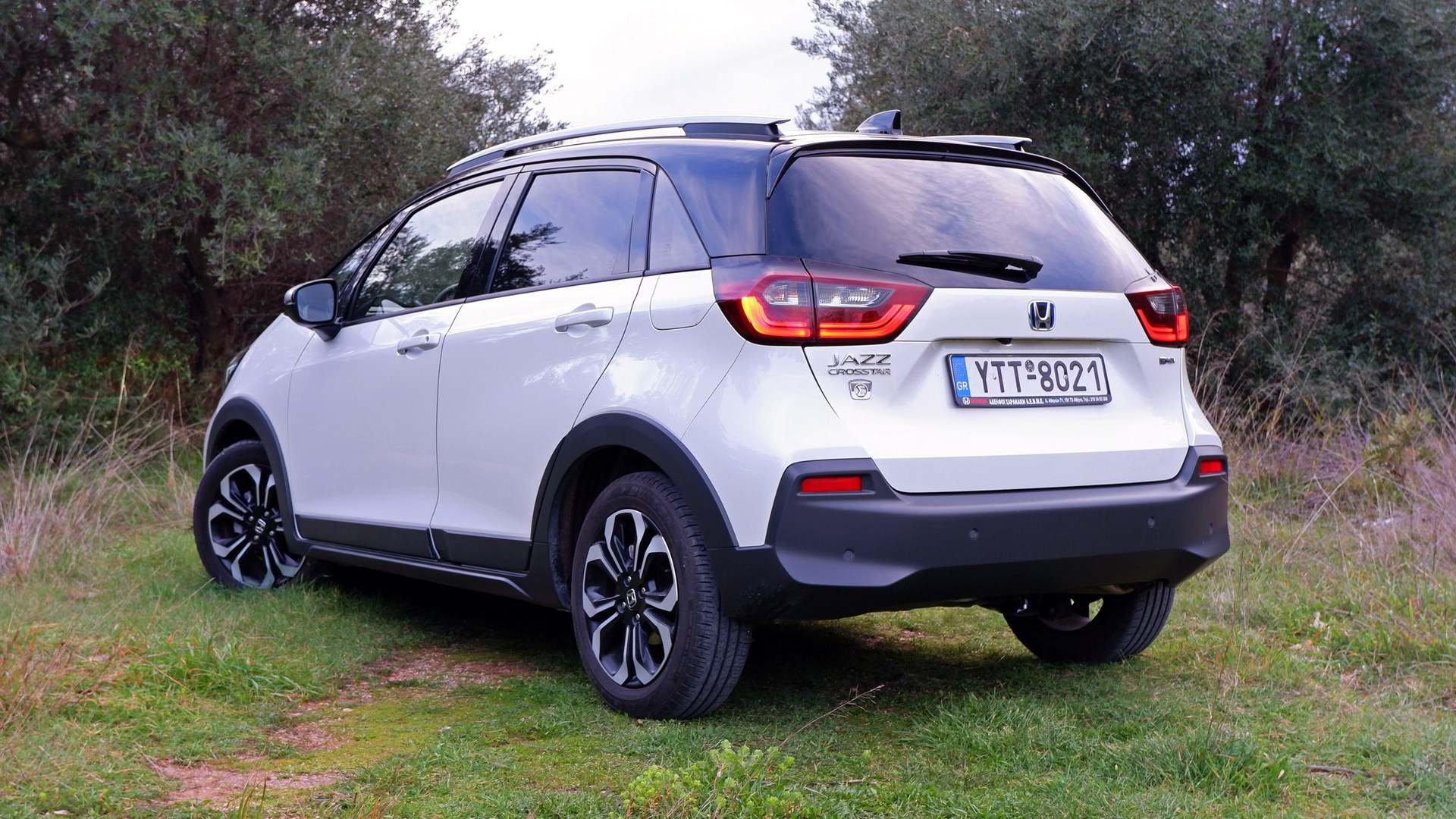 The finishing touches are the 16-inch wheels, the optional duo-tone treatment, the stylish roof rails, and most importantly the increased ground clearance of 152 mm (6 inches) which is 16 mm (0.6 inches) higher than the regular Jazz. The bodykit and the new suspension setup with more travel have resulted in a slight increase in all dimensions – even the wheelbase has grown by a tiny 3 mm (0.1 inches) to 2,520 mm (99.2 inches).

Despite looking large, the Jazz Crosstar is still classified as a subcompact vehicle measuring 4,090 mm (161 inches) long, 1,725 mm (67.9 inches) wide, and 1,556 mm (61.3 inches) tall. This makes it slightly longer than most superminis like the Renault Clio and VW Polo, although the height is closer to B-SUVs like the Renault Captur and VW T-Cross. 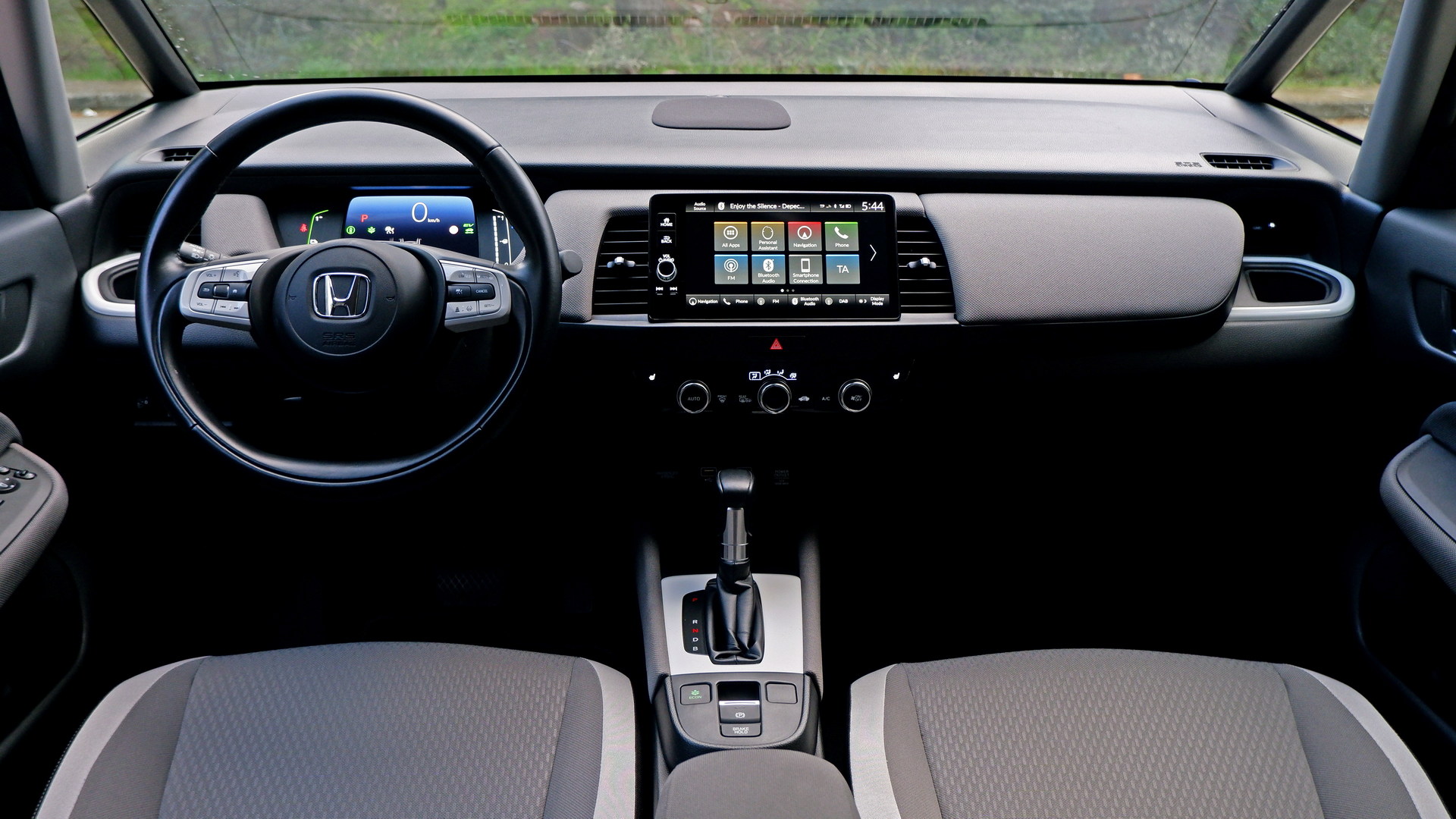 The soap bar shape of the Jazz makes more sense when you step inside the cabin. Visibility is great thanks to the large windscreen and the thin pillars, with the driver and the passengers sitting higher in the Crosstar. The dashboard looks fairly modern, with patches of fabric covering the hard plastics – no soft padding option from Honda in the smaller segments.

The standard 9-inch infotainment touchscreen is easy to use with a few physical buttons on the side and touch-sensitive shortcuts on the bottom. It supports all modern connectivity features (Android Auto, Apple CarPlay) and AI-based voice control, while in the Crosstar it is combined with a standard eight-speaker sound system. The 7-inch digital instrument cluster is a lot more basic than the ones in rival proposals from Ford or the Volkswagen Group, both in terms of size and customization options, but it shows all the information you need. 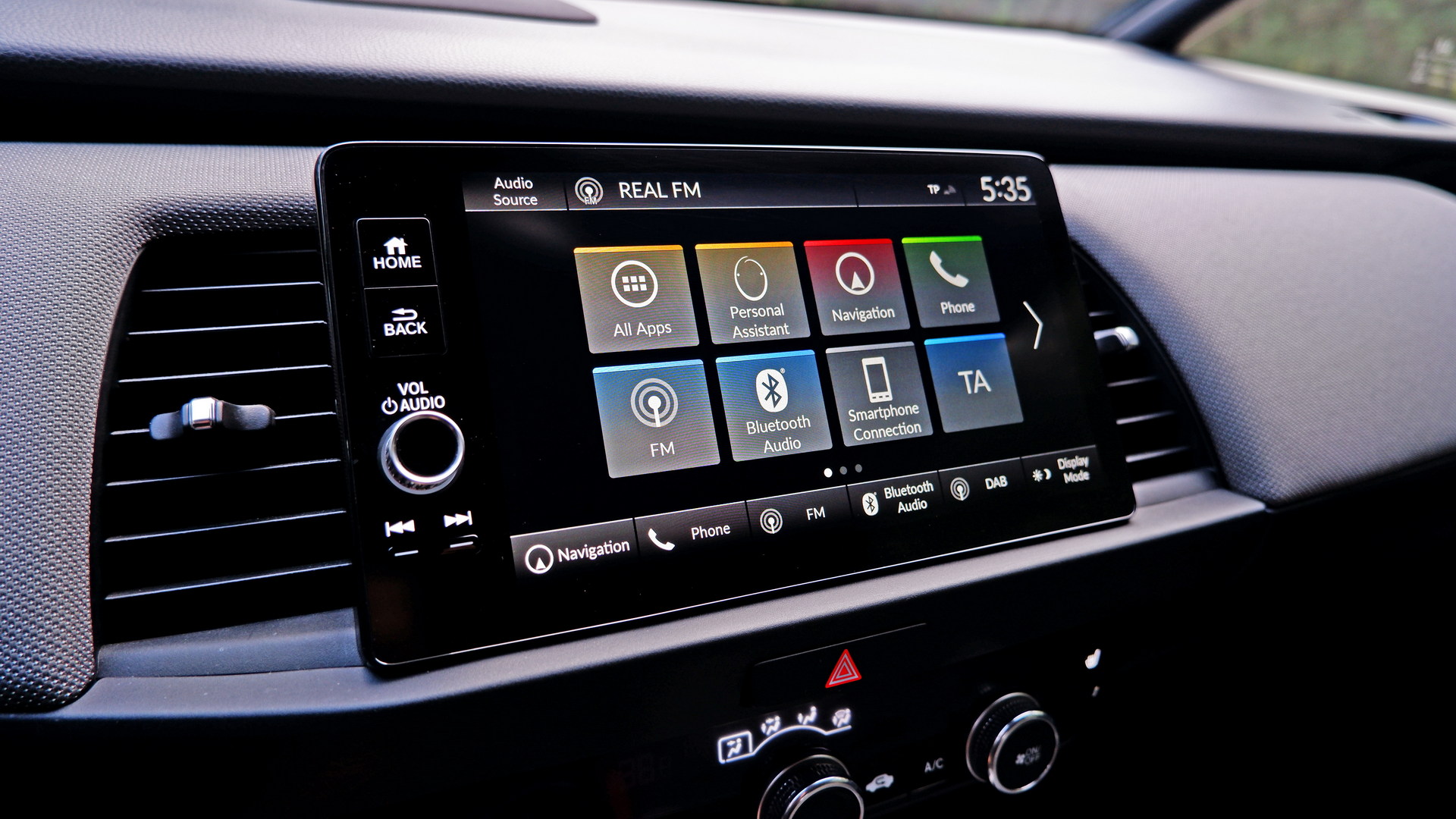 The high-mounted dual cup holders on each side of the dashboard will come in handy for your coffee or water bottles, showing that this car was built to make everyday life easier. You also get an additional cupholder in front of the storage compartment between the seats, large door pockets, and a dual glovebox for smaller items. In the Crosstar, all seats are upholstered in water-repellent fabric that is very easy to clean although it doesn’t look that exciting in light gray. Most importantly, all seats are pretty comfortable, with the front row benefiting from nice bolsters and reclining headrests.

The massive 986 mm (38.8 inches) of legroom for the rear passengers is by far the most you’ll ever see in a vehicle of that footprint. Two adults will feel like kings back there, sitting high and stretching their legs, let alone younger passengers on child seats. A third smaller-bodied passenger could snug in for shorter trips although the available width is limited. 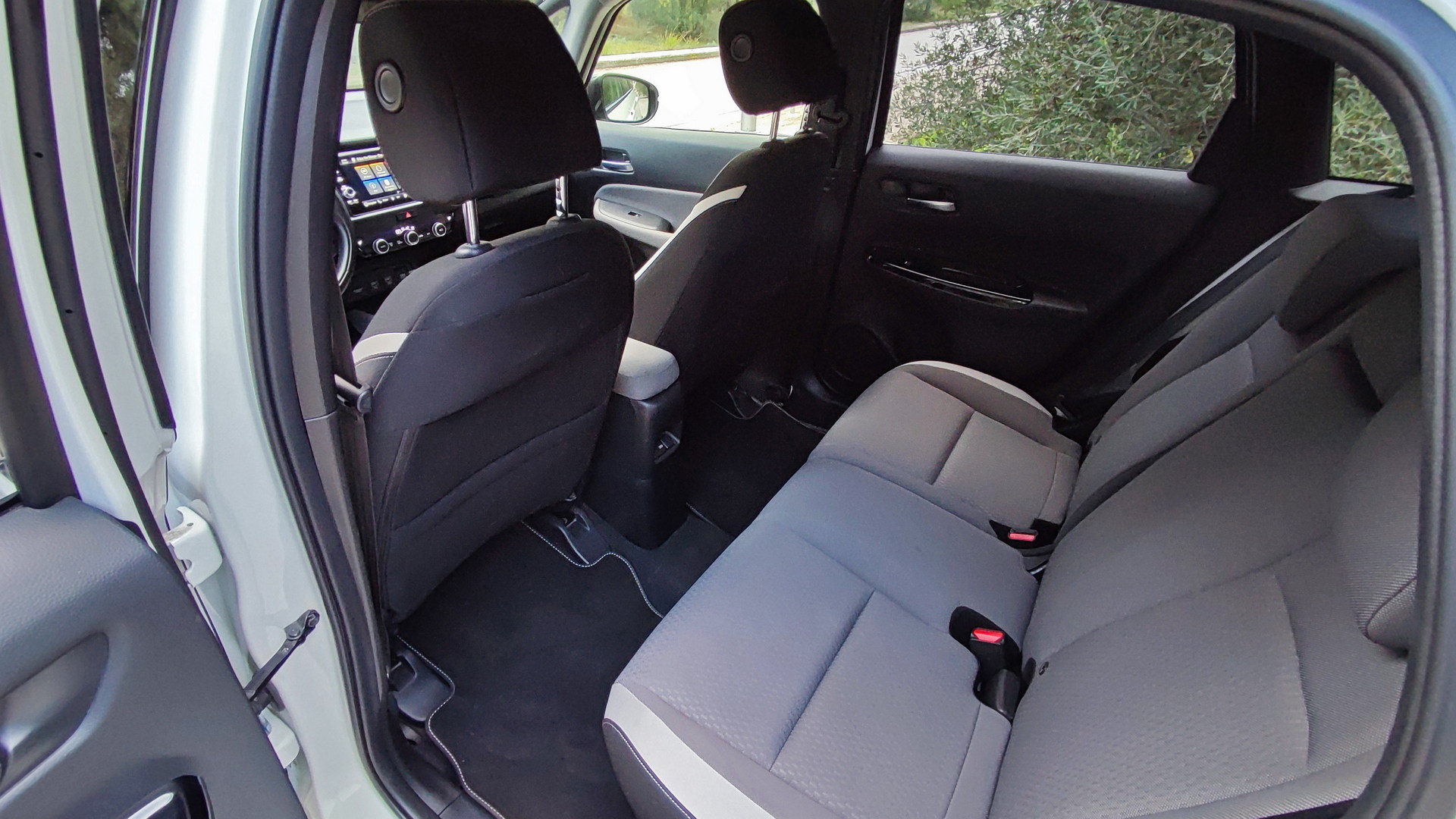 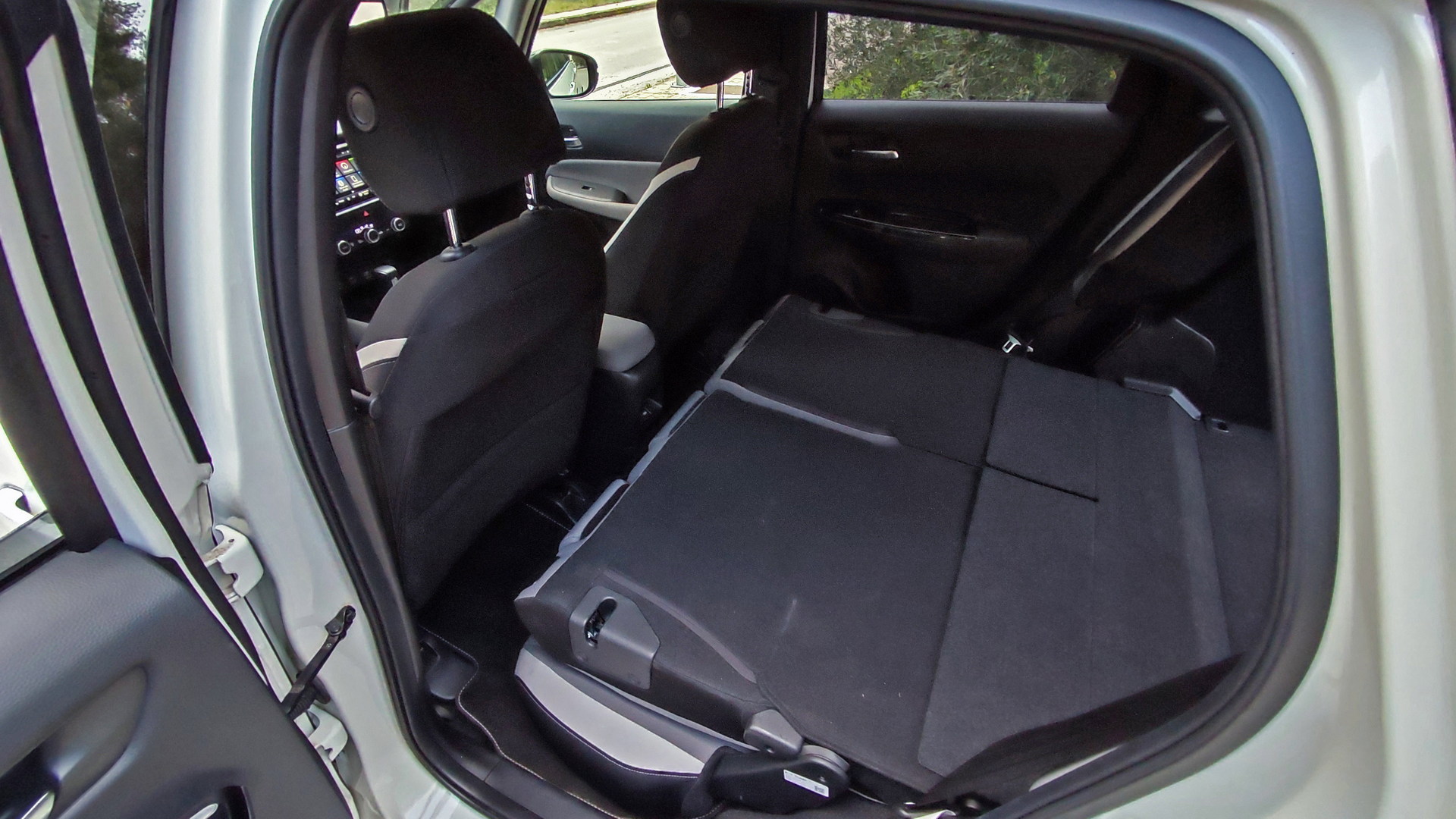 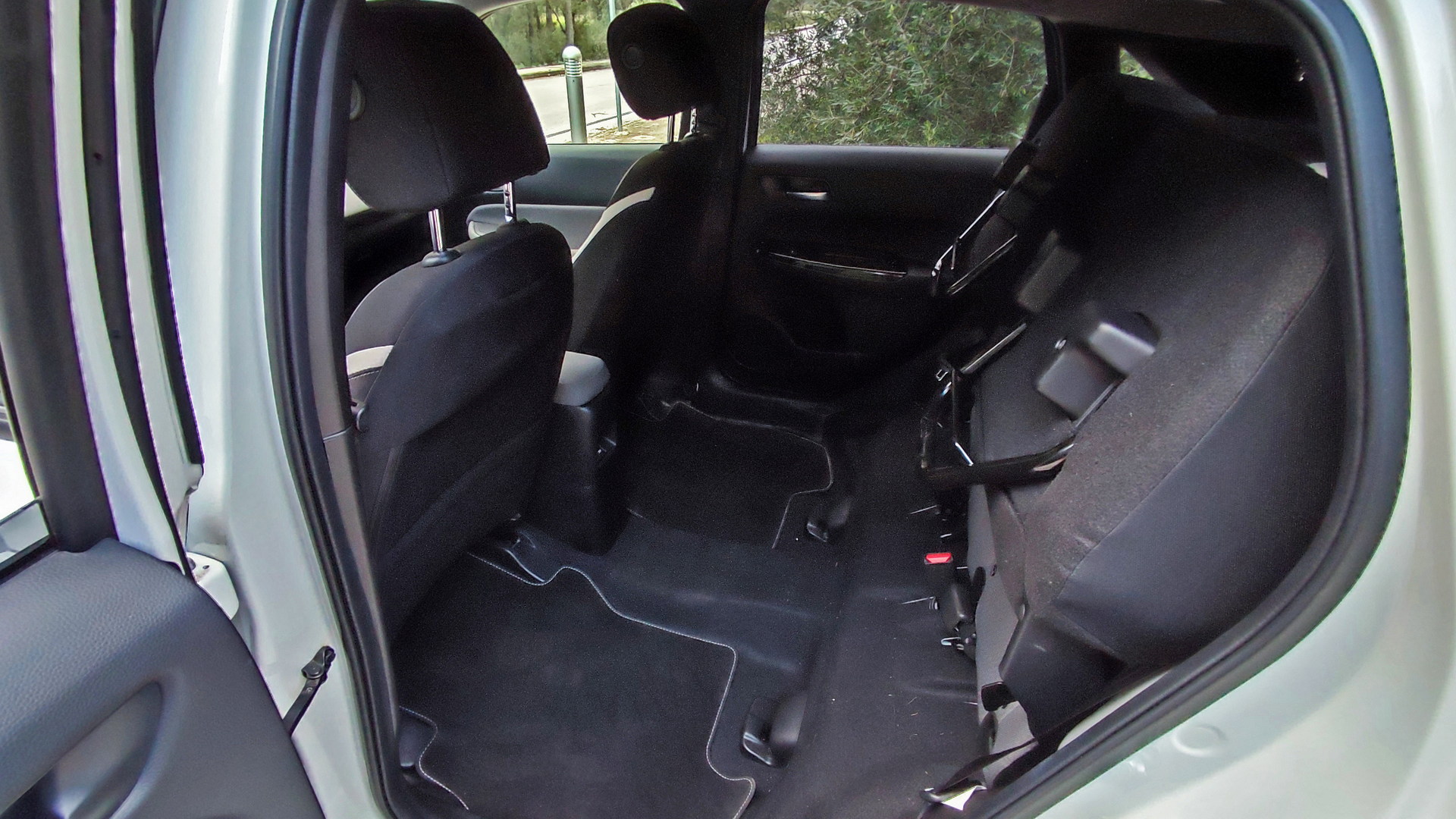 What takes practicality to the next level is the “Magic Seats”, a signature feature for all Jazz/Fit and HR-V models. They may not slide or recline, but they can fold completely flat forming a 1,199 lt (42.3 cubic feet) loading area without affecting the portion with the seatbelts, or flip upright creating a very large space at the back for carrying tall items like plants or bikes. Both transformations take place in a matter of seconds with only one hand, and independently for each side of the rear bench, giving the Jazz and Jazz Crosstar van-like capabilities.

Luggage space is not as impressive as you would expect with a capacity of 298 lt (10.5 cubic feet) but it has a practical shape and a surprisingly low loading area. The latter comes thanks to the clever packaging of the e:HEV hybrid powertrain and the rear suspension, and also to the expense of a spare wheel.

Comfortable, Economical And Quiet In The City, Loud In The Highway 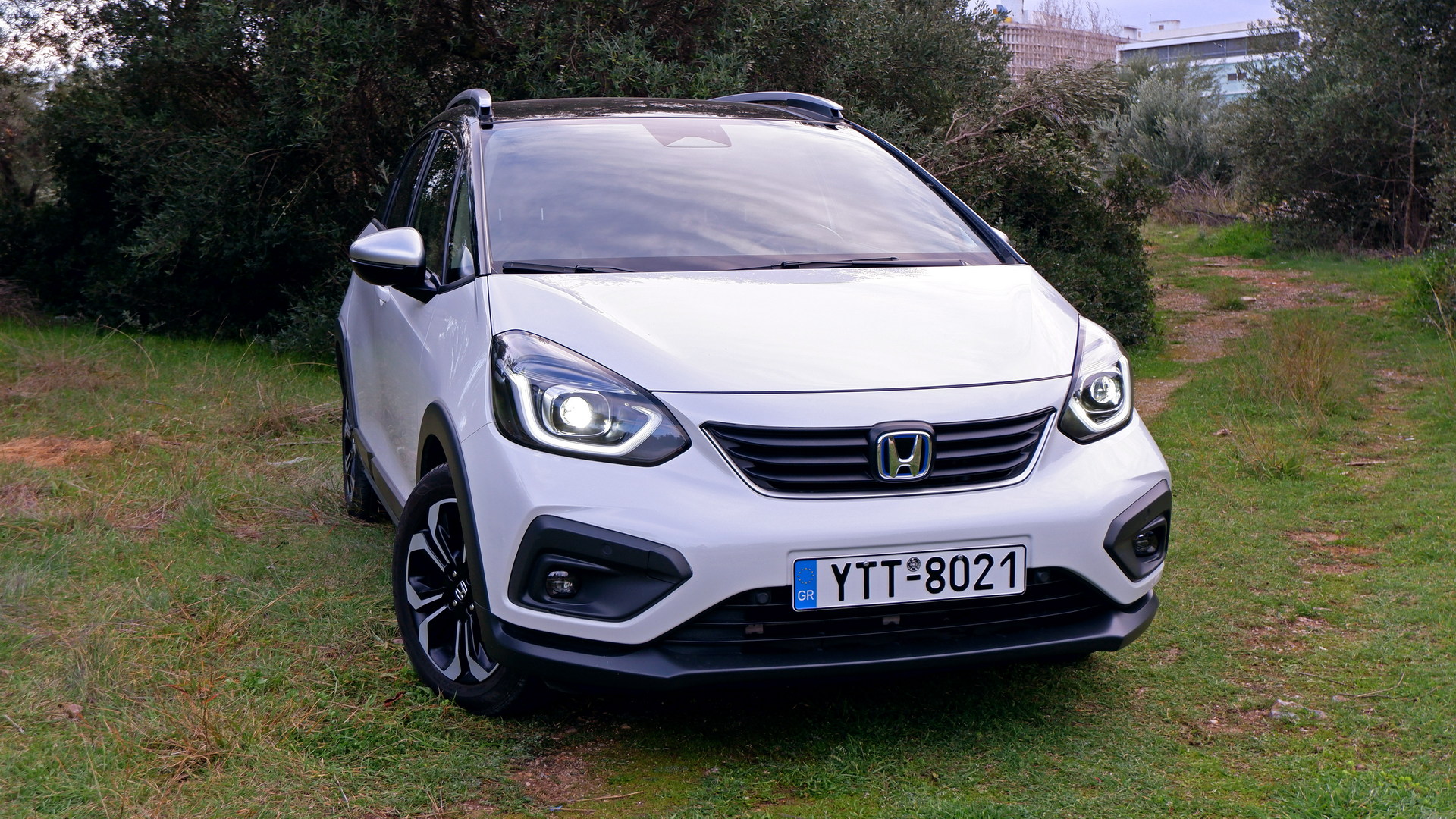 In Europe, the Jazz Crosstar is exclusively available with the e:HEV badge. This means that in EV Drive and Hybrid Drive modes it is the electric motor powering the front wheels, with the naturally-aspirated 1.5-liter engine limited in providing power to the generator which in turn charges the battery and powers the electric motor. There is also the Engine Drive mode where the ICE is moving the wheels but that doesn’t occur often since the self-charging battery is kept at a fair amount of charge.

Driving the Jazz Crosstar e:HEV in the city is a pleasant experience with the ICE either staying off completely for prolonged periods of time, or keeping a very low profile at low revs as a generator. The 107 hp (80 kW / 109 PS) of electric power doesn’t sound like much, but there is a healthy 253 Nm (187 lb-ft) of torque available on your right foot so you never feel underpowered despite not getting the same sense of acceleration as in a full-blown EV. 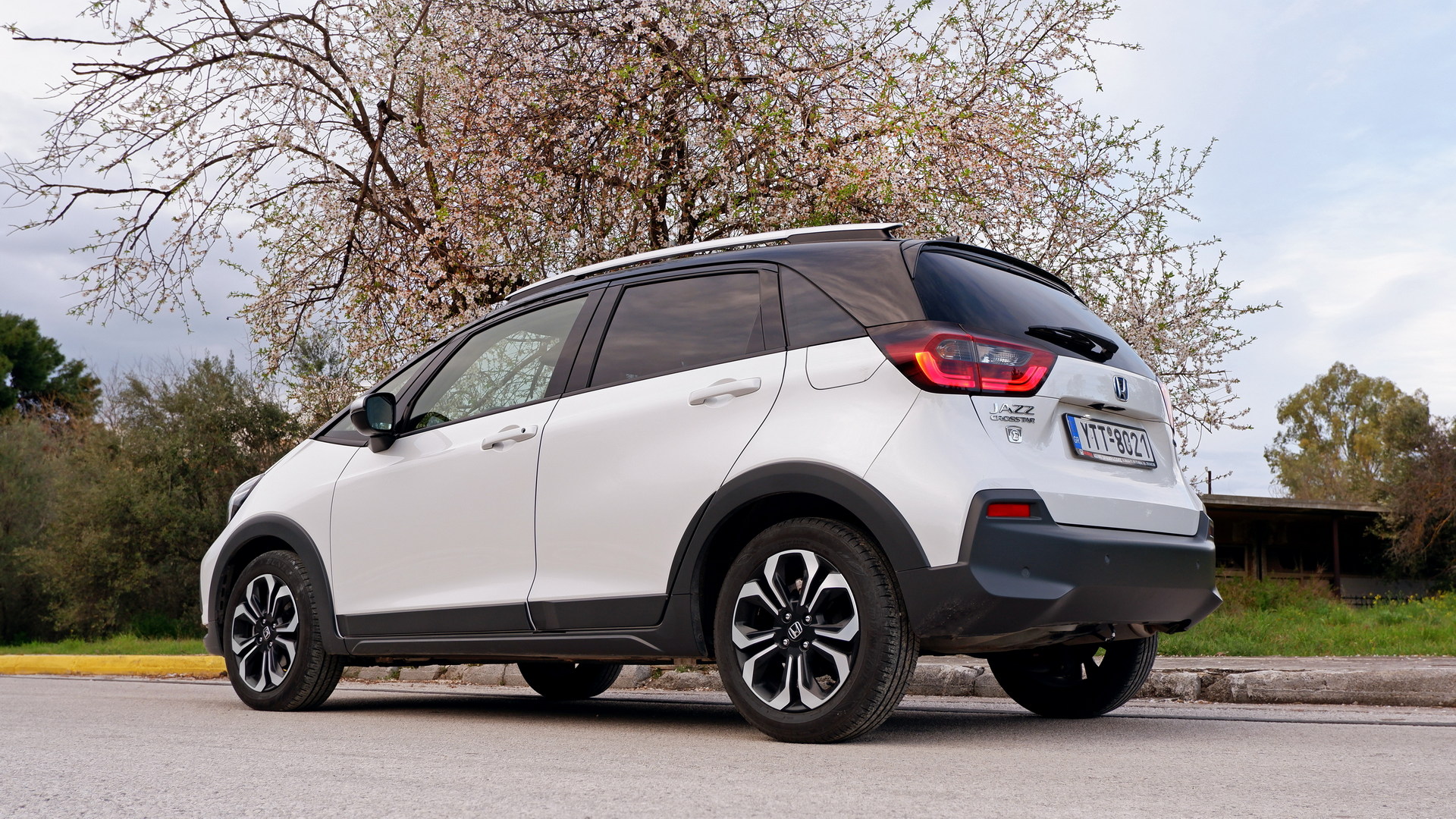 The ride is comfortable thanks to the softer suspension and the car feels quite stable at high speeds, while the steering wheel is nicely balanced. You can feel how much Honda engineers improved the chassis rigidity, refinement, and NVH compared to the previous generations setting new standards for the Jazz / Fit. The tall body and the jacked-up suspension have naturally resulted in noticeable body roll in the corners and although handling is good you don’t get inspired to attack B-roads. Performance is good initially but after the 0-100 km/h (0-62 mph) sprint that is completed in 9.9 seconds, you can feel it lagging behind some more powerful rivals. Having said that, a loaded Crosstar will easily retain speeds of 130 km/h (81 mph) and even go slightly faster than the advertised top speed of 173 km/h (108 mph) if you give it time.

See Also: Sony And Honda Partner To Bring EVs Into The Market By 2025 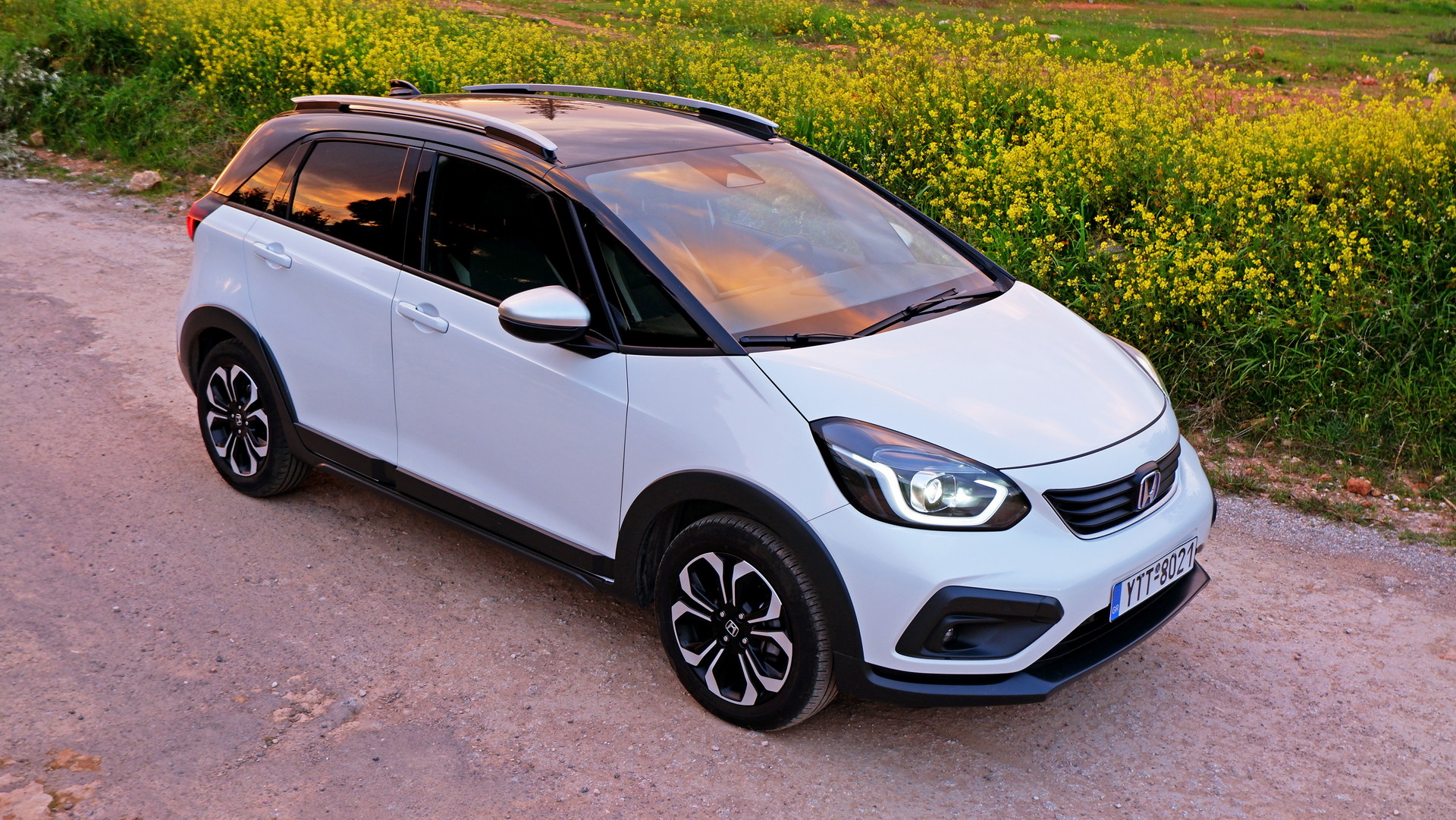 The laid-back character and driving dynamics won’t be an issue for any prospective buyers, but the loud engine noise you get when you step on the accelerator is definitely irritating. We wonder why Honda didn’t add more sound insulation materials between the cabin and the engine bay. The fact that the ICE is not always connected with the wheels and the driver’s lack of control over the e-CVT gearbox means there is a dissociation between revs, noise, and power delivery. However, there is a way to avoid that if you have a lighter foot and take it easy on upward slopes.

In terms of safety equipment, the Jazz Crosstar comes standard with 10 airbags – it was the first production vehicle to introduce a front-center airbag between the driver and the front passenger. It also gets the full Honda Sensing Suite of ADAS including one of the best Adaptive Cruise Control systems on the market that never betrayed us, plus the Lane Keeping Assist and Road Mitigation systems which worked well with heavy input on the steering wheel guiding our way. 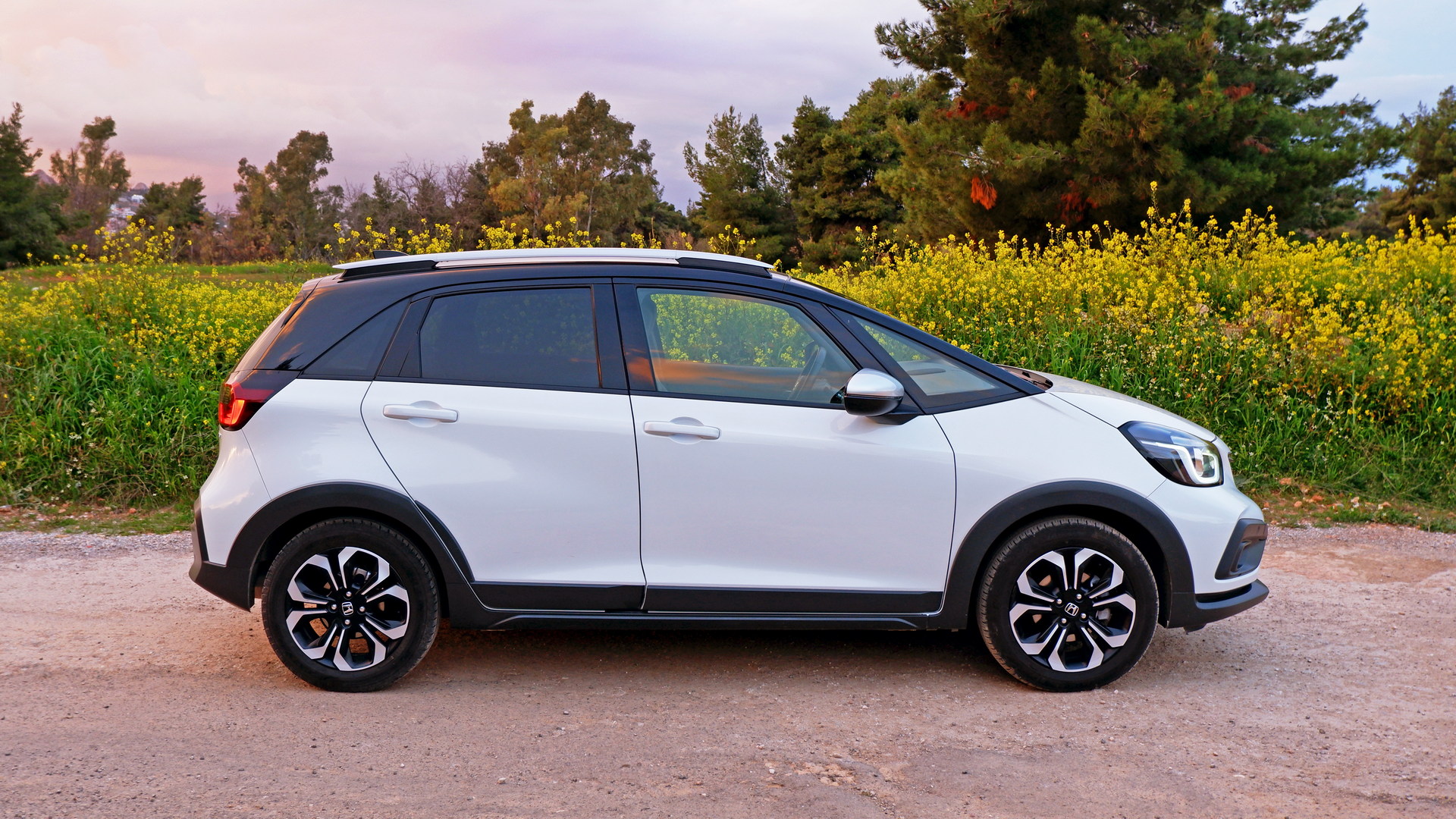 The Honda Jazz Crosstar starts from £24,170 ($31,971) in the UK in the only available EX trim which has everything you could ask for, besides the two-tone paint – you’ll have to pay an extra £1,360 ($1,799) for the fitting Premium Sunlight White Pearl / Crystal Black Pearl of our press car. Similarly, the price of the full-spec Jazz Crosstar Executive Bi-Tone in Greece where we drove it starts from €29,320 ($32,048) with everything included. Even though it is a well-equipped car offering a cabin more spacious and practical than vehicles from larger segments, its price is still pretty high for a supermini.

The only competitors of the Honda Jazz Crosstar in the crossover supermini segment are the Ford Fiesta Active, the Audi A1 Citycarver, and the budget-friendly Dacia Sandero Stepway, with all of them being cheaper but also more cramped inside. If you are slightly flexible in terms of dimensions you could get well-specced examples from the B-SUV segment like the Skoda Kamiq 1.5 TSI DSG for a much lower price. At a similar price point, you can even access base-spec premium compact crossovers like the DS 4, or larger C-SUVs like the Nissan Qashqai.

Besides the European market where you can only get the e:HEV variant, the Jazz Crosstar is available in Japan, China (Guangqi Honda / Dongfeng Honda), Singapore, and South Africa. Honda decided not to bring this generation of the Jazz / Fit stateside due to the declining sales of its predecessor. 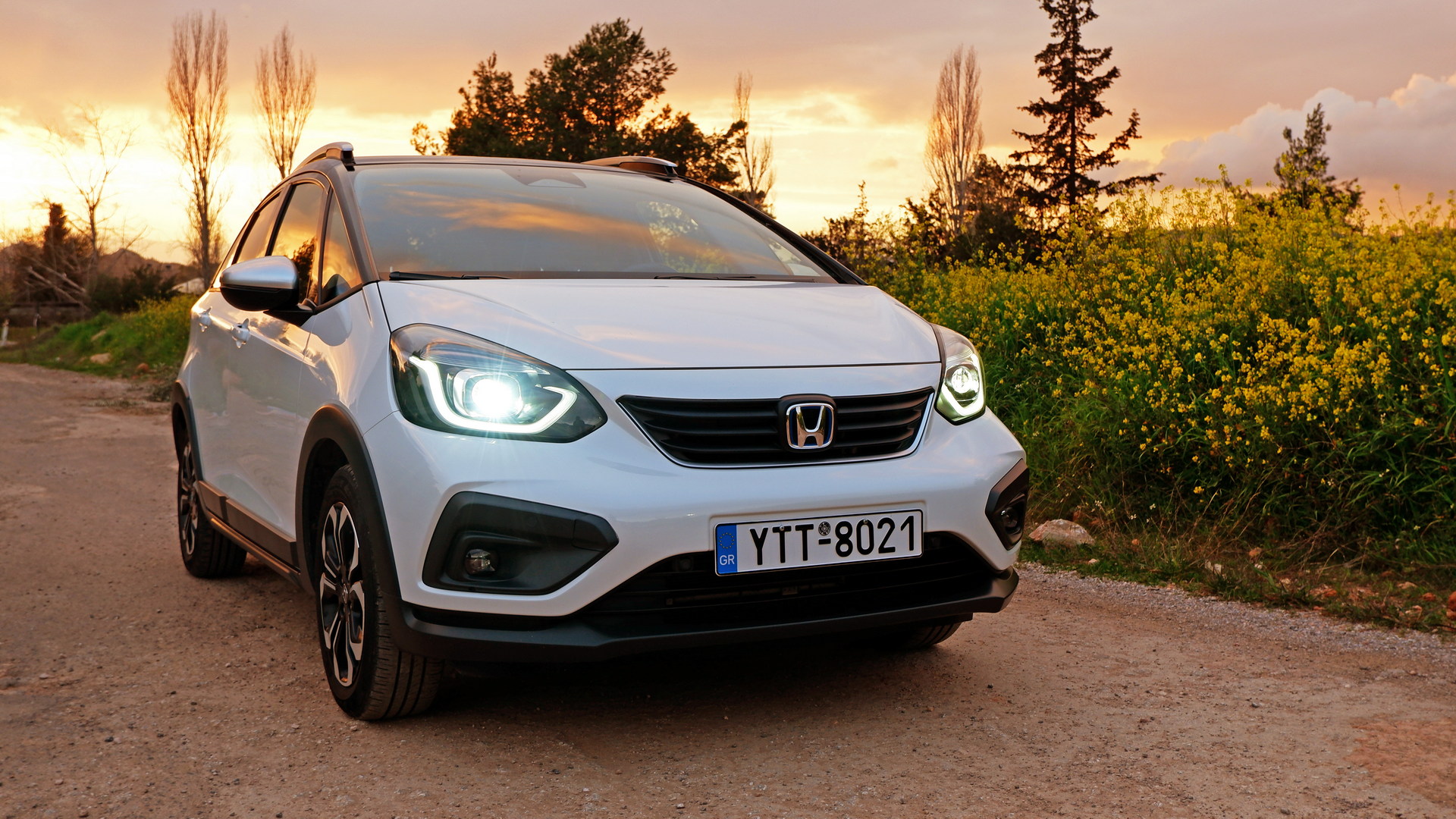 The Honda Jazz Crosstar is offering hands-down the most practical, family-oriented, and spacious cabin in the segment combined with a compact footprint and SUV looks. The adventurous styling bits, the increased ground clearance, and the softer suspension make the Crosstar more appealing to the masses than the standard Jazz and broaden the list of its rivals. The hybrid powertrain works great in most conditions and is very economical in the city, although the engine gets loud when you push and the combination of lukewarm performance and laid-back character won’t get you pumped up.

Pricing is quite steep for a vehicle of this size, even when you consider the full-spec equipment and the segment-leading versatility, as it puts the Jazz Crosstar into the fields of larger and more premium vehicles for those who are not strict about the exterior dimensions. Having said that, owners who know what they are buying will be ultimately satisfied with its unique features and the significant improvements over its predecessors.