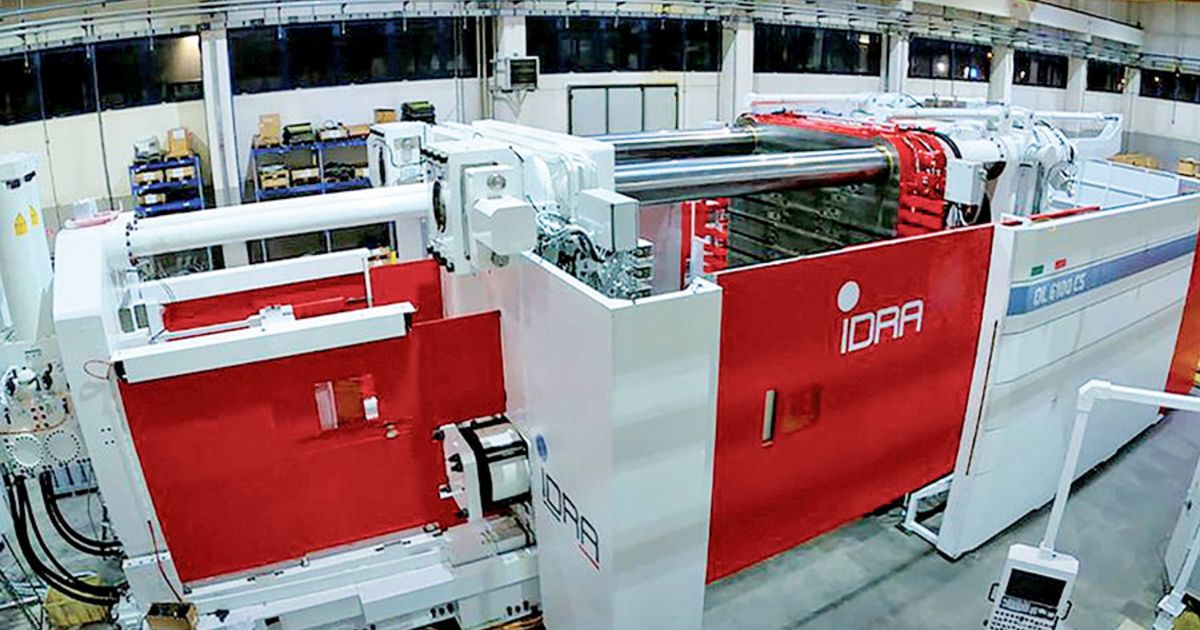 Electric vehicles consist of new technologies to manage power and move. But they have also opened the door to a promising manufacturing process that helps achieve higher targets in weight savings and cost reduction.

Automakers have had little to say about the new factory process so far — presumably for competitive reasons. Tesla is now believed to be using giga presses. So is Mercedes-Benz, and so will Volvo. Others will likely follow.

The concept permits a manufacturer to cast a single aluminum part that is large enough to replace 60 or more separate components, which previously had to be individually cast and subassembled into the desired body subsystem.

The innovation is largely thanks to Riccardo Ferrario, COO of Idra, a small Italian die casting specialist. Ferrario coined the term “giga press” in May 2019 for the manufacturing technique that Tesla was believed to be the first to use and which Volvo plans to start employing by mid-decade.

Mercedes-Benz used the one-part casting method to form the rear of the EQXX concept that it debuted at this year’s CES in Las Vegas, and Chinese automaker Nio is also interested in the technology.

Ferrario would not confirm whether Tesla is a customer, but there is detailed information online describing how the U.S. electric car maker converted a parking lot at its factory in Fremont, Calif., to house its first giga press in August 2020 to create the Model Y’s rear underbody, according to media reports.

Ferrario revealed that Idra spent three years and just under $2 million to develop the giga press. But like many rule-breaking inventions, the first giga press Idra presented publicly, at an industrial trade fair in Germany in 2019, was greeted with ridicule.

“All potential customers laughed at the idea, saying we could never make it work,” Ferrario said in a videoconference with Automotive News Europe from his office in Travagliato, Italy, east of Milan.

Idra has now sold 22 giga presses. Seven are in operation, five are being installed at customers’ plants, and 10 others are in line for delivery.

It’s mostly a difference of scale.

Before the introduction of the process, die casts using up to 4,000 tons of clamping force were able to create structural castings with a maximum of two cavities, generally referred to as shock towers.

By increasing the clamping force to 6,100 tons, Idra created a press capable of a multicavity casting, with up to four shock towers in one injection. In practice, the giga press can produce a rear underbody frame in a single piece.

In November 2021, two years after the concept was laughed at, Idra held an open house in Travagliato that attracted 200 guests from around the world.

“After that day, we generated 21 nondisclosure agreements with potential customers, including several automakers,” Ferrario said.

Although Ferrario declined to speak of Tesla, industry insiders have said that Tesla’s newly opened plant near Berlin will use several Idra giga presses to create the front and rear underbody platform for the Model Y crossover.

Ferrario said that a one-shot casting of a front or rear platform from a giga press replaces myriad pieces and reduces weigh by 10 to 30 percent, depending on the mix of steel and alloys used in a traditionally built platform.

Indra estimates that a giga press saves a customer about 40 percent in costs over traditional casting operations because it can replace a series of tools and up to 650 feet of robotized welding lines typically needed to put together the individual parts of a complete front or rear platform.

Industry insiders believe this could eliminate up to 300 robots, which also helps an automaker reduce its energy consumption. Production time is slashed because it is faster to create a single casting than to produce the same part by welding together up to 60 pieces.

Idra estimates the new production technique can deliver three vehicles in the time it takes for one to be made using today’s typical processes.

“All of the above is moving us toward a more sustainable car manufacturing process,” Ferrario said.

In theory, Ferrario said, the central platform is the next piece that could come out of a giga press.

“But we do not design cars,” he said. “We design die casting equipment for what the automakers require.”

He foresees the giga press being used to make large battery cases for full-electric cars. A next step would be to include the battery case in the central platform, making it a structural part of the vehicle.

A giga press could also cast an entire platform for a small battery-electric car.

“In China, we see a growing interest for minicars, about the size of the original Smart ForTwo,” he said, “where a 2.2-meter single-piece platform cast by a giga press could work well.”