Hyundai launched the Kona back in 2018 as a subcompact crossover based on a tweaked version of the i30 platform. A decade ago, a crossover like the Kona wouldn’t exist and people would simply buy the i30. Nowadays, people can’t get enough of SUVs and crossovers. So, the Kona came to be. But what about the Kona N?

The South Korean car manufacturer famously put the hot hatch industry on notice with the launch of the i30 N a few years ago. Created as a rival to the likes of the Renault Megane R.S. and Honda Civic Type R, the i30 N makes a lot of sense. Same with the i20 N, launched as a rival to the Ford Fiesta ST. The Kona N is a little different as it was not launched into an established segment of the industry and has carved out a market all to its own.

Was this a masterstroke from Hyundai? It absolutely was. 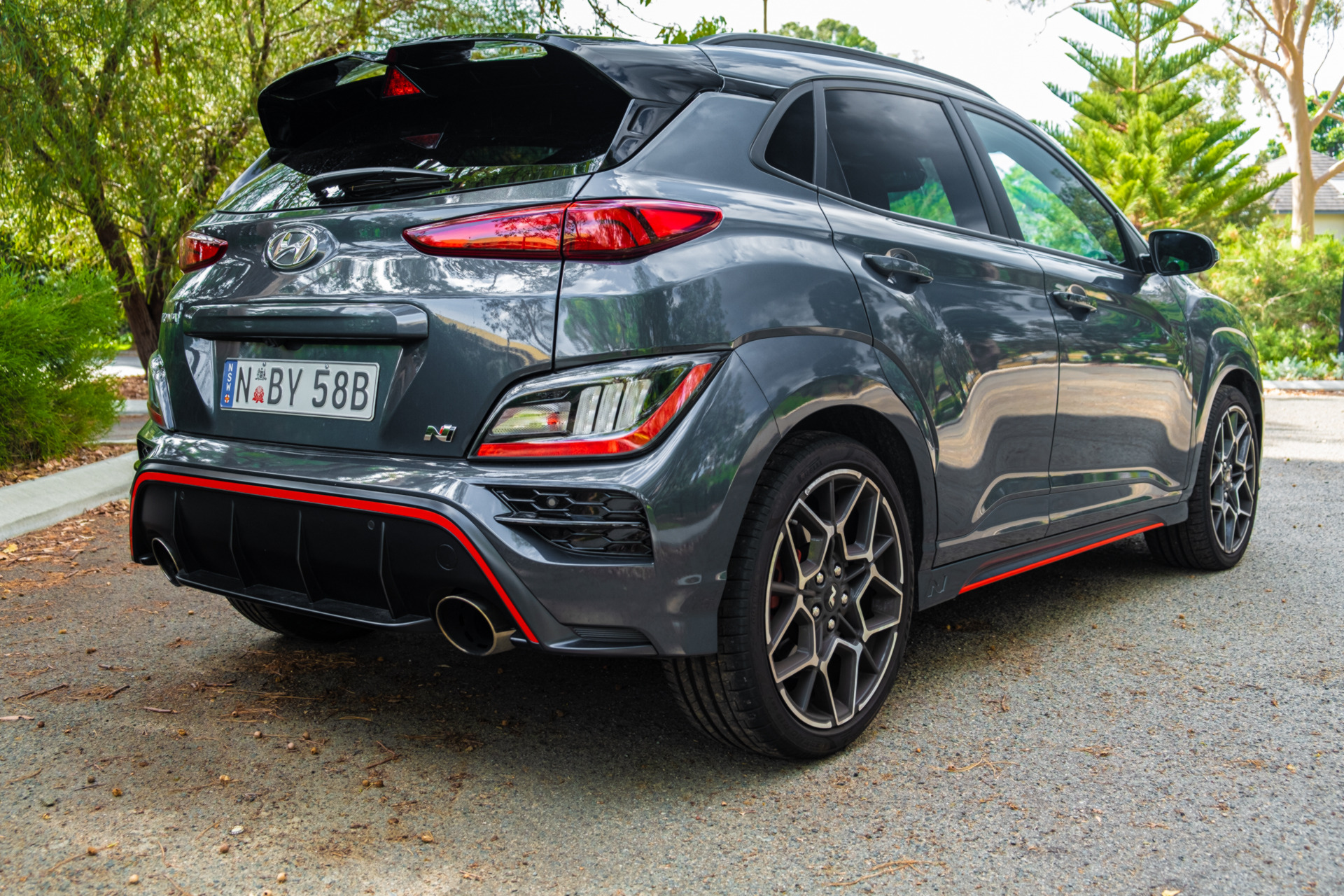 Transferring all of this power to the pavement is an electronically-controlled mechanical limited-slip differential and a set of bespoke Pirelli P Zero tires measuring 235/40R19 at all four corners. Other key features include the adaptive suspension and the impressive brakes with discs that measure 360×30 mm at the front and 314×20 mm at the rear.

Hyundai’s engineers have also equipped the Kona N with the same driving modes as the i30 N hatch while also including its N Grin Shift, N Power Shift, and N Track Sense functions. Unlike other N products, however, the Kona N pairs all of its configurable drive modes with four different traction modes designed for Snow, Deep Snow, Mud, and Sand. It is a crossover after all. 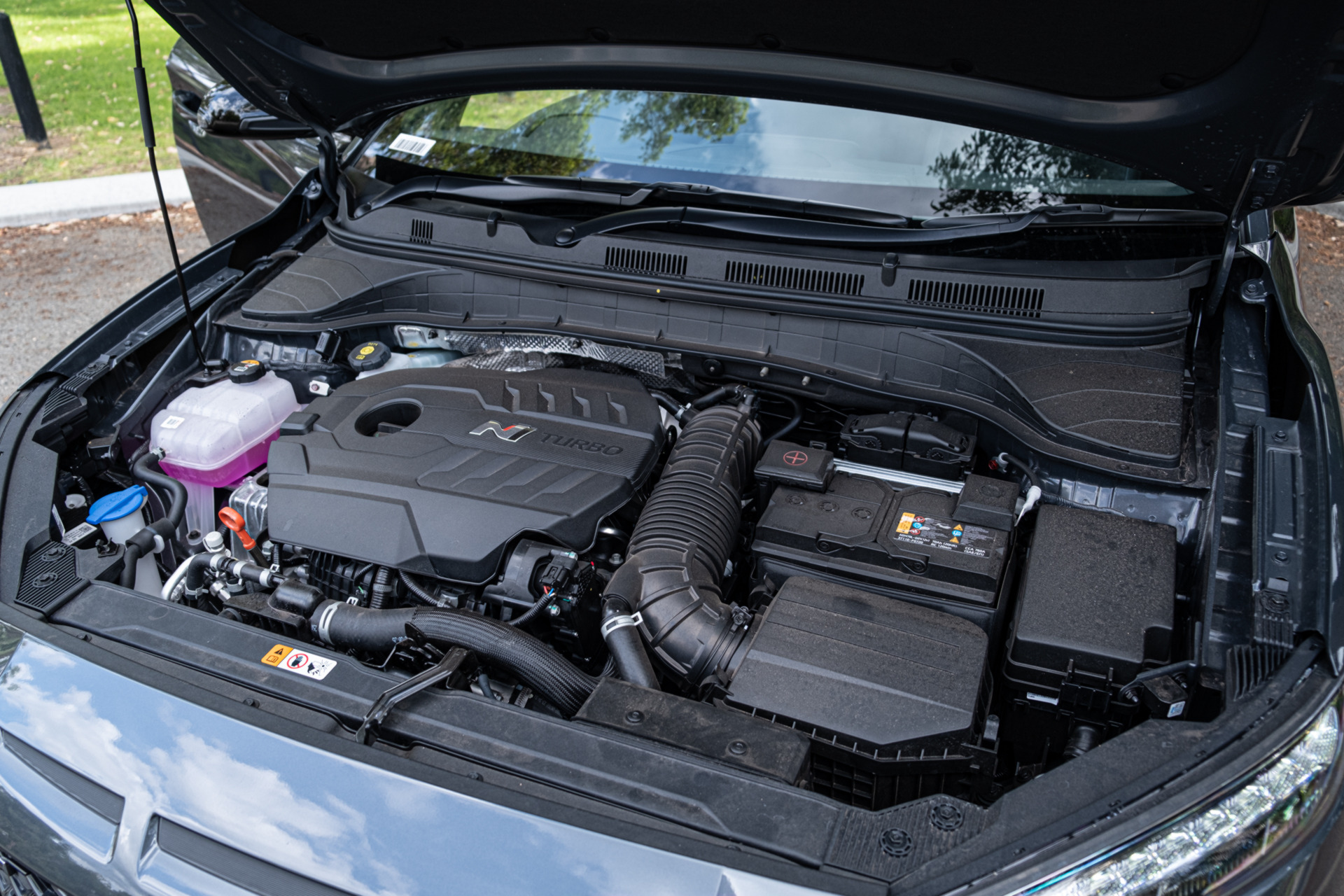 The visual differences between the Kona N and lesser variants are obvious. They start at the front end where the performance crossover sports a distinctive black grille and has a trio of Audi Quattro-inspired slots just above. The front end also includes blacked-out air intakes and bright red trim across the splitter.

Making the crossover stand out even further are 19-inch wheels with a complex spoke design and sitting over red brake calipers. The side skirts are new and complex with an N logo while found at the rear is a bold diffuser, two massive tailpipes, an N badge, a beefed-up bumper and a two-part roof-mounted spoiler. This thing looks seriously mean and is certainly more interesting to look at than the i30 N hatch. 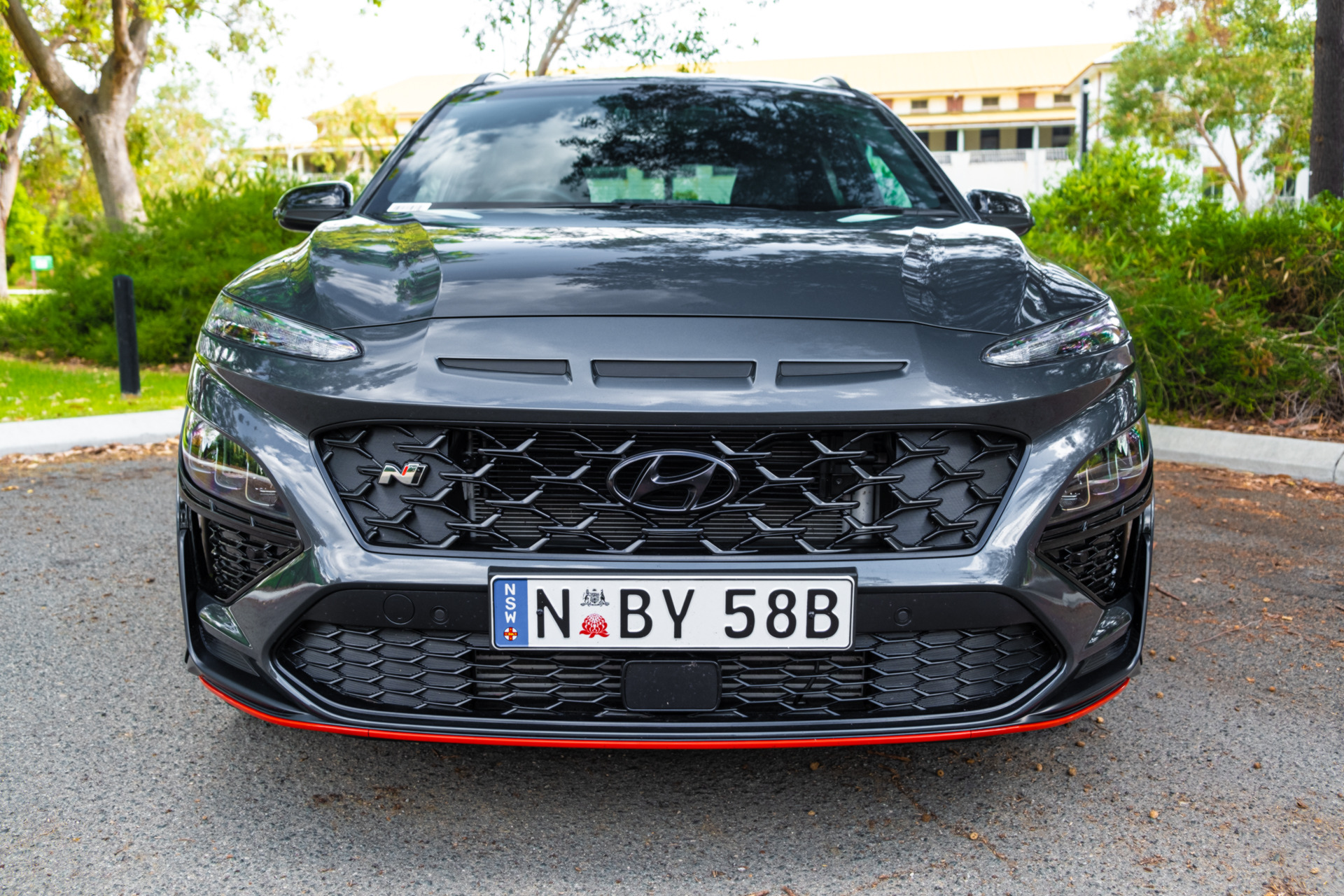 Modifications continue into the cabin where the Kona N has sport seats distinct from other Kona models, a three-spoke steering wheel with two customizable N buttons, and alloy pedals. Our Kona N test car was the flagship Premium model that also features power-adjustable seats, a panoramic sunroof, ambient lighting, a heated steering wheel, heated and ventilated front seats, and a head-up display.

A large 10.25-inch infotainment screen sits at the center of the dashboard offering Apple CarPlay and Android Auto. A 10.25-inch digital instrument cluster is also featured, as is a Qi wireless charging pad.

You want to know how this thing drives? Extraordinarily well 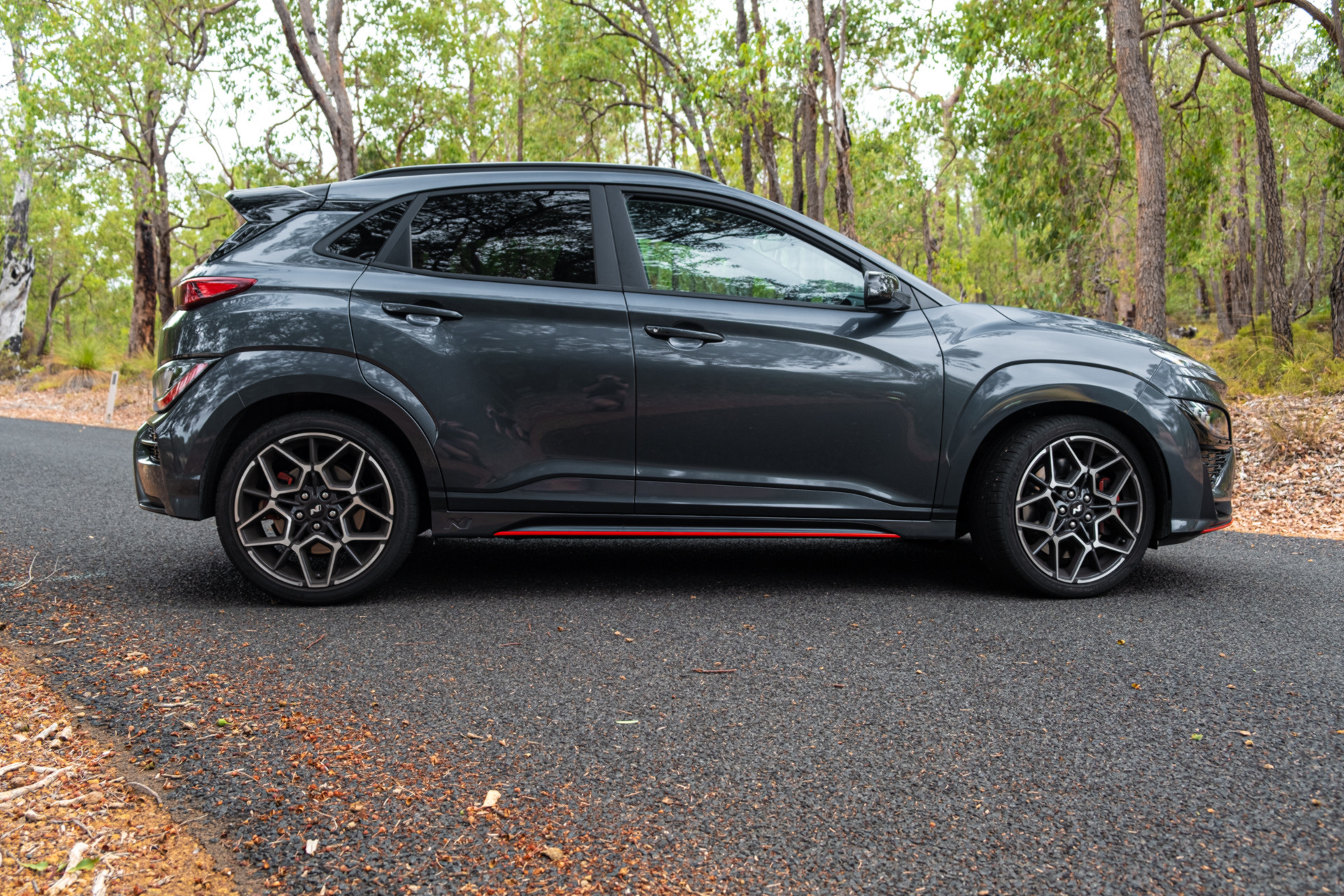 One of the first things that strikes you when driving the Kona N is just how similar it feels to its hot hatch sibling. You do sit a little higher but the handling is equally as stunning. There is also more body roll than the hatch.

With the crossover turned into N mode, the steering weights up beautifully and turn-in is simply tremendous. As soon as the P Zero tires bite into the pavement, the Kona N encourages you to hit the throttle mid-way through a corner, making full use of the e-LSD to seamlessly transmit power to the ground and fire you through the exit.

The e-LSD of the crossover is just as tenacious as it is in the i30 N and the crossover seems to have just as much grip. Much like in the i30 N, the e-LSD often tugs at the steering wheel, pulling you right into the apex of a corner, even if you’re not actually steering at the apex. It operates in a slightly more subtle way in the Kona N but is just as effective. We also noticed less torque steer than we did in its hot hatch brother, despite power being identical. 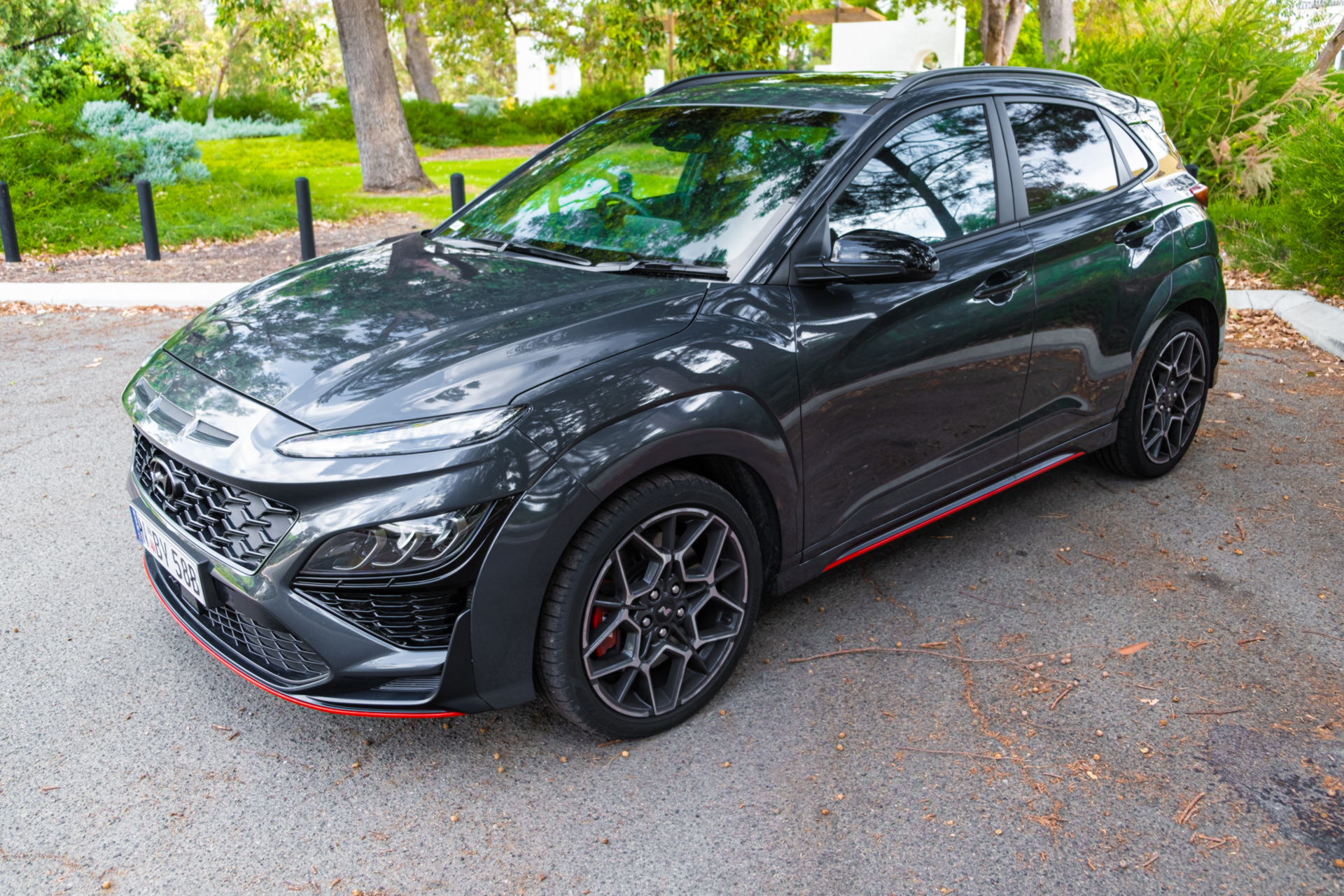 The 2.0-liter turbo-four and eight-speed dual-clutch remain as sharp as ever. Pin the gas and the engine fires you down the road at frightening speeds, pulling strongly all the way through to the redline. Engage the N Grin Shift mode and peak power jumps to 213 kW (285 hp) for 20 second bursts and while you can’t really feel this extra power, you definitely take notice of the savage gear shifts that pin you back in the seat. The exhaust is also a touch louder with NGS enabled.

We praised the eight-speed dual-clutch when we first experienced it last year and remain very impressed with it. Shifts are quick and smooth and at low speeds, the transmission is very well behaved. You get a great idea of how well the engine, transmission, e-LSD, and traction control systems have been calibrated when you use the launch control system.

Simply select your desired RPM limit and press activate on the touch screen, and the system is ready to go. Floor the brake and throttle and the Hyundai builds boost and fires you off the line with surprisingly little wheel spin, despite the front-wheel drive layout. It will hit 100 km/h (62 mph) in 5.5 seconds and continue through to 240 km/h (149 mph). 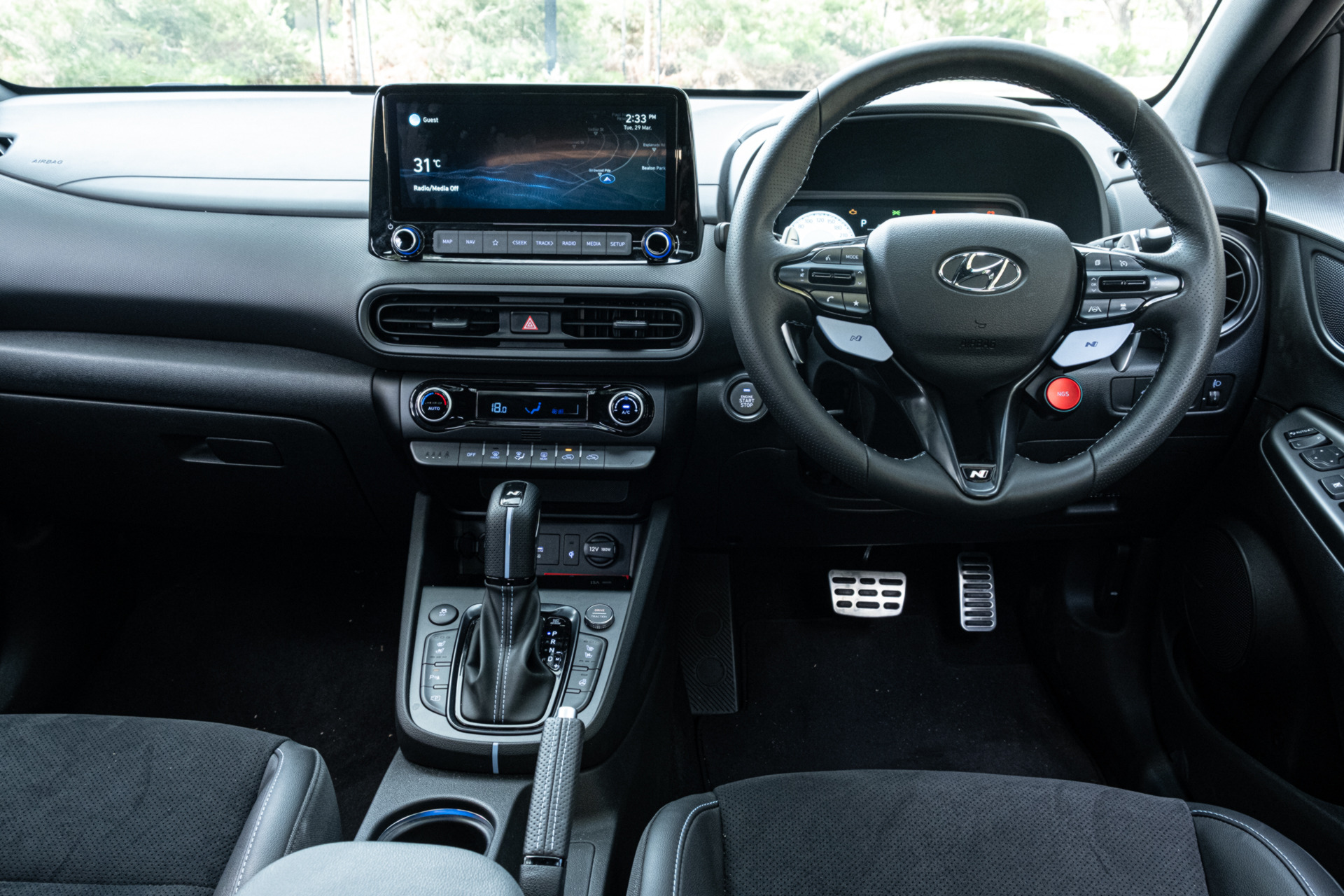 As with so many other Hyundai models sold in Australia, the Kona N has also been given a bespoke suspension tune to suit local roads. Left in its Normal mode, the suspension is firm but rides imperfections and bumps in the road well. The Sport and Sport+ settings stiffen things up further and are usable on the street, although we suspect these settings will be a little too harsh for most. Best to leave them for the track or exceptionally smooth roads then.

And what about AWD?

Did Hyundai miss an opportunity in not building the Kona N with all-wheel drive? Perhaps. In some markets, the less powerful Kona N-Line is indeed available with all-wheel drive and were the N division to experiment with it, the Kona N would have been the vehicle to do it with. This would have allowed it to rival the more expensive and more powerful VW T-Roc R and given it a unique character from other N products. However, as far as front-wheel drive performance crossovers go, the Kona N is hard to beat. 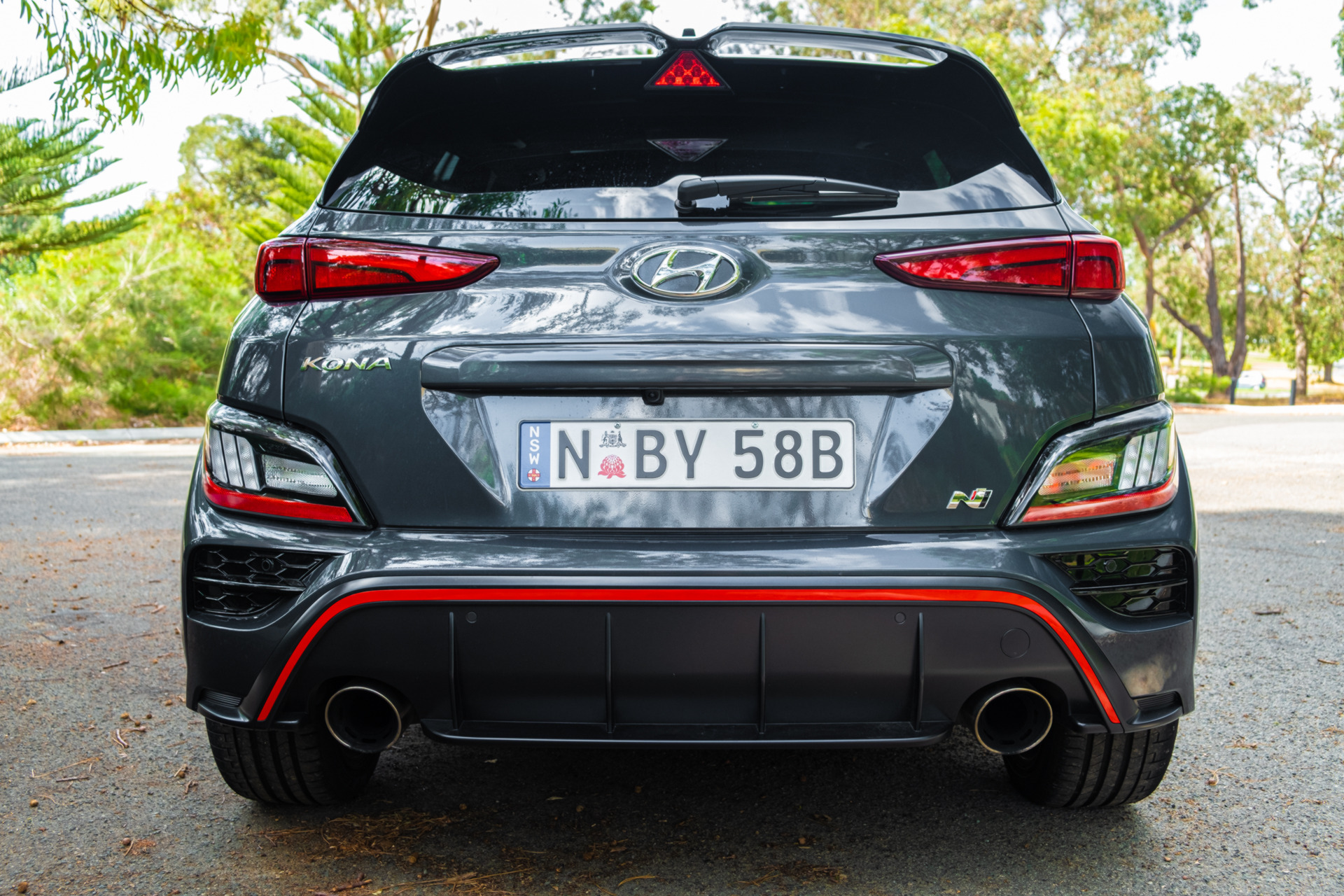 The Hyundai Kona N is a seriously impressive vehicle. Sure, it may not make much logical sense, but that only makes it more lovable.