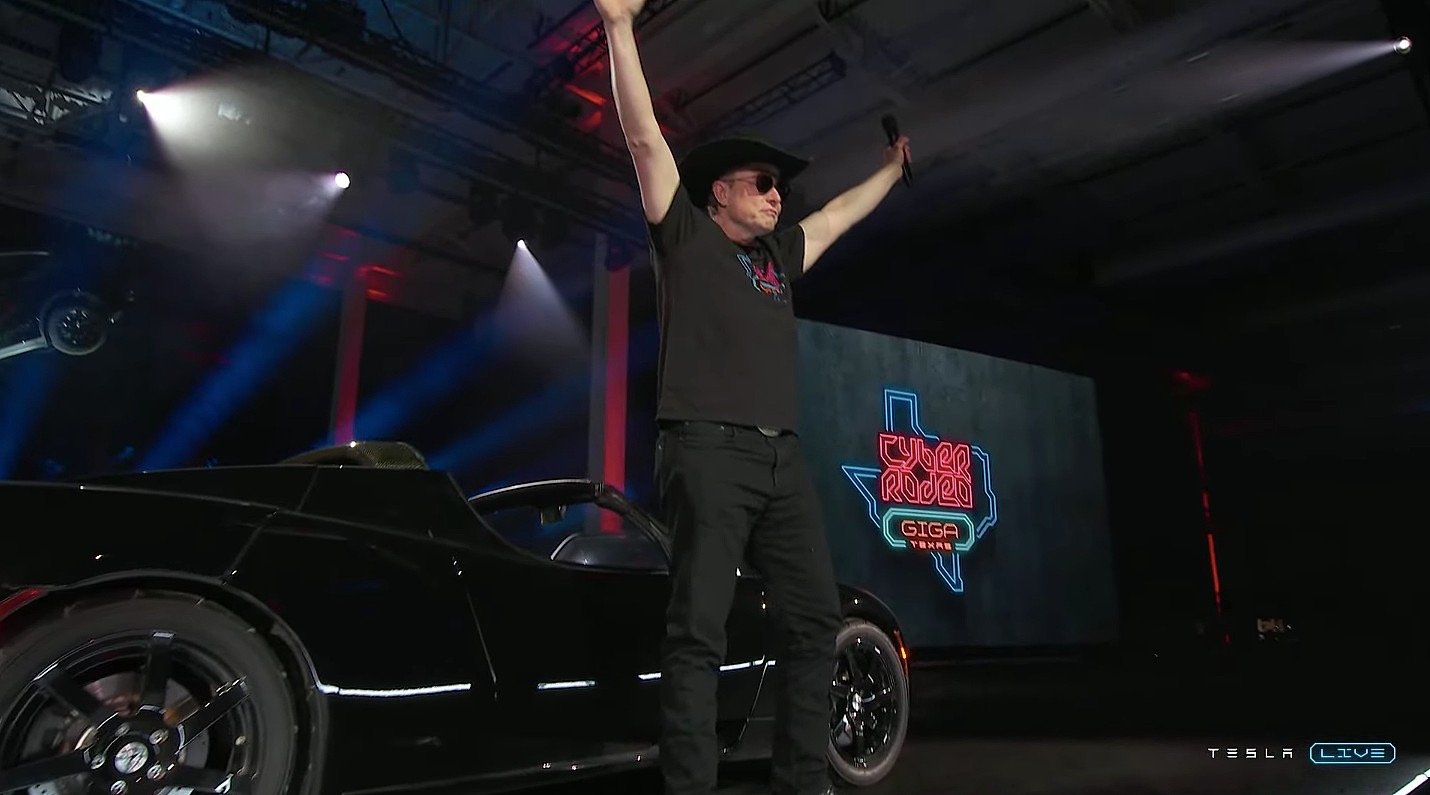 As everyone at Tesla’s Cyber Rodeo settles down to listen to Elon Musk’s talk at Giga Texas, the anticipation builds in the air. The Tesla community is eager and excited to hear about any updates and details Elon Musk will announce to the world at Giga Texas Cyber Rodeo.

Welcoming Elon Musk to the stage are drones depicting an image of Nikola Tesla, the inventor the company is named after. The drones also depicted the Cyber Rodeo sign. Later, the drone show formed the image of a moving vehicle, which turned out to be the Model Y. Next the drones formed the Cybertruck’s outline in the sky, an image few at the Cyber Rodeo will forget.

And, of course, in true Elon fashion, Tesla did not forget to highlight the community’s love for The Doge with drones. The Tesla hedgehog also made an appearance during the spectacular drone show.

After the drone show, Tesla showed a short clip of a “herd” Tesla Model Y’s running through Giga Texas grounds alongside a horse and its rider.

The video was cut short with the arrival of Elon Musk, arriving in style in an original Tesla Roadster — the car that started it all.

The following are Elon Musk’s comments from his Giga Texas Cyber Rodeo address.

“We’re gonna talk about the past, present and future,” Elon Musk told the crowd, showcasing the first car Tesla ever made: the Roadster.

“When we first started out Tesla, I thought we had — optimistically — a 10% chance of succeeding,” he stated. He thanked the Tesla team for their hard work and contributed the company’s current success to them.

Musk lists all the products Tesla offers, including its solar products. He announced that two-thirds of America’s electric vehicles are Tesla cars.

Musk highlighted the accomplishments of the Tesla AI team. He announced that Tesla was aiming for the wide release of FSD beta in North America this year.

“California was running out of room,” Musk stated. “And we needed a place to grow big. And there’s no place like Texas,” he said, thanking the state and particularly Travis County.

Musk revealed that Tesla Giga Texas is taller than the Burj Khalifa, the Eiffel Tower, if the factory were turned on its side. According to Elon Musk, you could fit a total of 194 billion hamsters in Giga Texas.

“And this building is the most advanced car factory that Earth’s ever seen,” proclaimed Elon Musk, bringing up the idea that Tesla’s factories are product in and of themselves once again.

Musk noted that Tesla is building its own cells at Giga Texas, the long-awaited 4680 cells. He proudly stated that the Austin factory could be one of the biggest cell factories in the world.

“Raw materials in, a bunch of stuff happens, and car out,” Musk said, describing the simplified version of Tesla’s main occupation. He added that Tesla plans to produce the Cybertruck in Austin next year.

“I can’t wait to have this baby around. [Cybertruck] is gonna be epic,” Musk commented about the electric pickup truck.

Musk also stated that Giga Texas will be the most “high-volume” factory in America. He stated that Tesla aim to command 20% of the auto market long term.

“We’re gonna move at a truly massive scale,” Elon Musk teased. He also hinted that Giga Texas will dive deeper into its Robotaxi fleet, describing it as futuristic and significantly different than Tesla’s other offerings. Musk also talked about Optimus.

Tesla plans to produce V1 Optimus, the Cybertruck, Roadster, and Semi next year.

Tesla Chief Designer Franz von Holzhausen shows up with the Cybertruck. Elon Musk points out that there are no handles on the Cybertruck. He apologizes for the vehicle’s production delay.