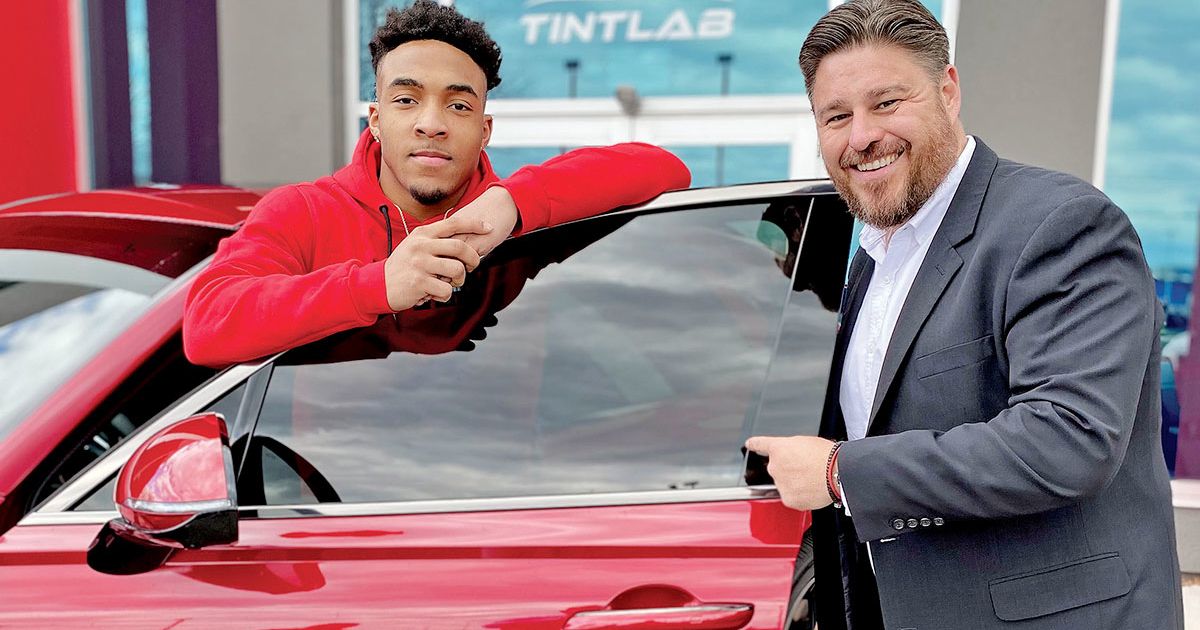 Ohio State University running back TreVeyon Henderson is among the top football players in the country, but at Ricart Automotive Group he’s just one of the “interns.”

Henderson, several of his teammates and other Ohio State athletes star in a series of advertisements that show them fetching coffee, pushing cars and being silly with group President Rick Ricart.

The “Rick’s Interns” videos are a byproduct of the NCAA’s June 2021 decision to allow student athletes to profit from the use of their name and image. Since then, Ricart Automotive and many other dealerships have begun leveraging the star power of collegiate sports standouts through promotional deals and compensating them in a variety of ways that previously would have broken NCAA rules.

Athletes across the country are getting free access to vehicles and being paid in some instances for appearing in commercials or wearing clothing with dealership branding.

The “name, image and likeness” policy change has opened huge marketing doors for dealerships in states such as Alabama, Iowa and Kansas, home to rabid college sports fan bases but no major pro teams.

In central Ohio, Buckeye die-hards are everywhere, yet the players they idolize had been off limits in ads until now.

“It’s tough today with TV advertising, the world of social media, all of the streaming services. We have to be more creative than ever, so wherever our ads are placed, they really have [to have an] impactful angle to get people’s attention,” Ricart told Automotive News. “The biggest kind of celebrities in Columbus, Ohio, today are the stars of the Ohio State sports programs.”

Ricart Automotive, which has multiple large dealerships in Columbus, has inked nearly 20 name, image and likeness deals with Ohio State athletes and compensates them in numerous ways. Some get cash for doing promotions. Others get leases on vehicles, though they have to cover insurance and fuel.

Henderson originally picked out a Chevrolet Camaro, but he swapped it for a Genesis GV70 crossover after a few months when he realized the rear-wheel-drive pony car wasn’t a good fit for Ohio winters.

Ohio State basketball player Meechie Johnson Jr. chose a customized Ford Mustang GT with the Mach 1 appearance package. Teammate Eugene Brown III is among those exchanging their services for modifications to their own vehicles. Ricart said Brown is getting a wrap on his late-model Kia Optima and other enhancements.

In addition to football and men’s basketball, the Ricart group has worked name, image and likeness deals with women’s basketball players and a wrestler.

Ricart said other dealerships in the area have done deals with Ohio State athletes, too. He sees this as a positive because it allows more students to benefit.

“There are more athletes than there are vehicles on our lot available,” Ricart said. “We can’t just give everyone that qualifies [a vehicle]; we have to be a little more selective. When other dealers are helping take care of players also, it’s actually a good thing because I really wouldn’t want there to only be five players on the team that we’re selfishly promoting, and no one else has an opportunity.”

In Pennsylvania, Bowser Automotive landed two of the top football players from the University of Pittsburgh: quarterback Kenny Pickett and his go-to wide receiver, Jordan Addison.

Pickett is headed to the NFL Draft this month, but Addison will be back at Heinz Field in the fall. Addison partnered with Bowser in January and has been posting product pitches on his Twitter account.

The players had to be mindful of dealerships’ tight inventory as a result of the industry’s microchip shortage.

“They’ve been very understanding in terms of what’s available and not extremely picky,” said Megan Erney, Bowser’s advertising and public relations director. “We kind of let them know if they’re driving a truck right now, we may need to push them into something else if that inventory does become an issue.”

It’s not just athletes at the nation’s top programs whom dealerships are eager to work with. In Virginia, Jim McKay Chevrolet didn’t waste any time when the NCAA adjusted its rules, signing George Mason basketball player Josh Oduro to a two-year deal on the first day it was allowed.

Oduro, who is from Gainesville, Va., impressed the store with a presentation he made about how the two sides could work together. He also detailed his family roots in Ghana, where his father is from.

Oduro, who led the Atlantic 10 in scoring this past season, has done commercials for the dealership and wears a Jim McKay Chevrolet polo during press conferences. Some of the promotions run during events on the video boards at EagleBank Arena where the men’s and women’s basketball teams play.

The 6-foot-9 Oduro, who didn’t have a vehicle, picked out a Chevy Malibu for his deal. The store will cover any maintenance, but Oduro is responsible for insurance and gasoline.

Jim McKay Chevrolet President Kathy McKay is a longtime George Mason basketball fan and donor. The basketball court at the team’s practice facility bears her name, and the university’s Jim McKay Natatorium is named for her late father, who was a major donor as well.

Elia Ahmadian, the dealership’s general manager, said many college players have long juggled two full-time jobs as students and athletes. Some have limited means, Ahmadian said, and can use the benefits that come with name, image and likeness deals.

They “weren’t able to get compensated for any of that,” Ahmadian said. “We were happy to see that [name, image and likeness rule] pass because it gave us an opportunity to do it. We know a lot of other people illegally did it, and they would get caught. Now it’s legal, and we can actually legally help and, in some way, get a little bit of promotion for ourselves, but mostly it’s really to help these athletes.”