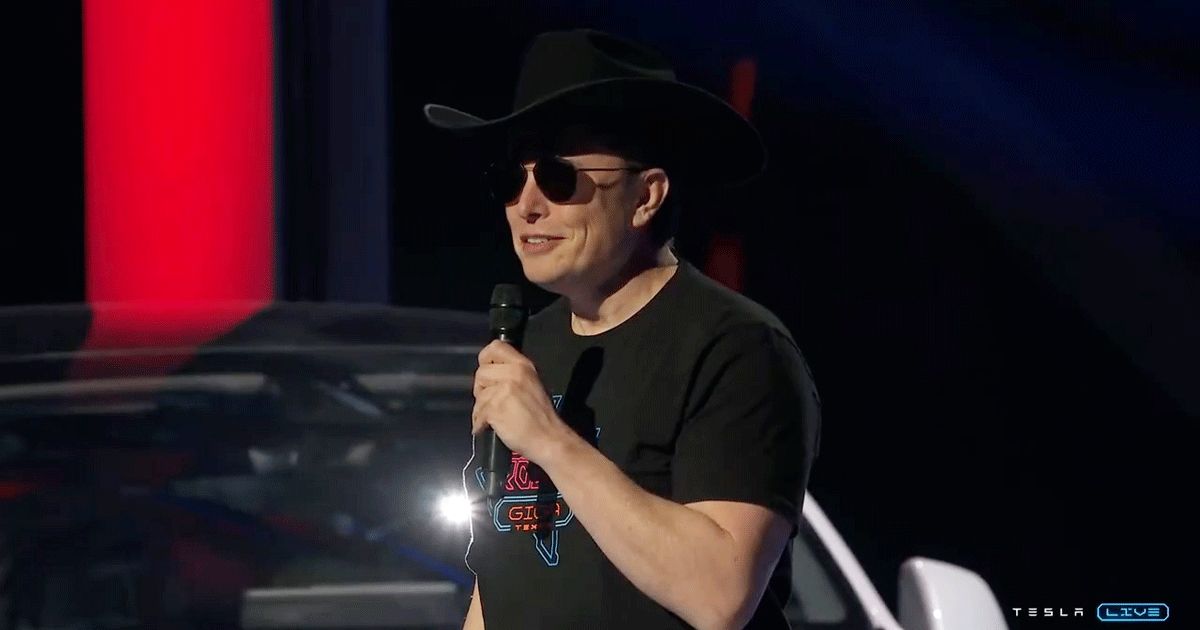 Tesla will launch production of the long-awaited Cybertruck pickup out of its new Austin, Texas, factory sometime next year and is working on a dedicated “robotaxi” model using the company’s autonomous vehicle software, CEO Elon Musk said at an opening day ceremony for the plant.

Musk, wearing a cowboy hat and sunglasses, delivered the first batch of Model Y crossovers out of the massive Austin facility late Thursday and said the factory would scale to 500,000 Model Ys per year before adding Cybertruck production. The plant could eventually reach 1 million units per year, Musk said.

On a January earnings call, Musk had hedged on a 2023 rollout for the Cybertruck, which originally was targeted for launch last year. Musk was more definitive this week about the Tesla product roadmap.

“We are aiming, just with the Model Y program alone, to get to half a million units a year and then we are going to start manufacturing Cybertruck here next year,” Musk said to thousands of cheering Tesla fans who were invited to opening day events.

Musk, 50, said Tesla is working on other products that would remain secret. He also said there would be a broader rollout of “beta” testing software that Tesla calls “full self-driving.” Only a limited number of customers who have purchased the driver-assistance software have been given access to the full beta version.

“I am not going to spill all the beans right now, but what I can say is we’re going to move to truly massive scale,” Musk said on a stage inside the factory. “Massive scale, full self-driving, there is going to be a dedicated robotaxi that is going to look quite futuristic.”

Musk did not offer a detailed timeline for the rollout of delayed products, such as the second-generation Roadster sports car and the Semi cargo truck, but did say that 2023 would be more focused on product after this year’s focus on production volume. Tesla opened another new factory in Berlin last month.

“We will be in production with Roadster and Semi,” Musk said. “So, this year is all about scaling up and then next year there is going to be a massive wave of new products.”

The Austin opening ceremony was dubbed Cyber Rodeo and included factory tours showing off advanced manufacturing techniques. Tesla will also make its own batteries at the site, Musk said.

On social media, Tesla fans streamed video from the Giga Texas plant while touring significant parts of the interior space. Outside, a group of Tesla Model Y vehicles in red, white and blue were arranged to mimic the Texas flag. Some visitors sported cowboy-themed attire and there was a mechanical bull on display.

With Tesla’s recent factory expansion, global annual production is expected to rise from about 1 million vehicles last year to about 2 million in 2023, according to analysts. Tesla now has four vehicle assembly plants with the addition of Austin and Berlin to Fremont, California, and Shanghai, China.

With estimated first quarter U.S. sales of 110,000 vehicles, Tesla is now leading the luxury segment and demand is easily outstripping its supply. Depending on the vehicle and trim, wait times for a new Tesla model can take several weeks or several months.

In Austin, Tesla is also expected to produce a more affordable version of the Model Y. The current U.S. base model, the Long Range, with 330 miles (531 km) of range, starts at $64,440 with shipping. Tesla has certified two new Model Y versions with the EPA with ranges of 244 miles and 279 miles, according to Reuters.

Still, Tesla fans are clamoring for the wildly styled Cybertruck, which will come to market well after electric pickup rivals such as the Rivian R1T now on sale and the Ford F-150 Lightning that will launch in coming weeks.

Sam Fiorani, vice president of global vehicle forecasting at AutoForecast Solutions, estimates the Cybertruck will go into production toward the end of next year and a commercial van could also be produced in Texas.

The second generation of the Tesla Roadster, which has been delayed for several years, is expected to eventually come out of the company’s Fremont plant, Fiorani added.