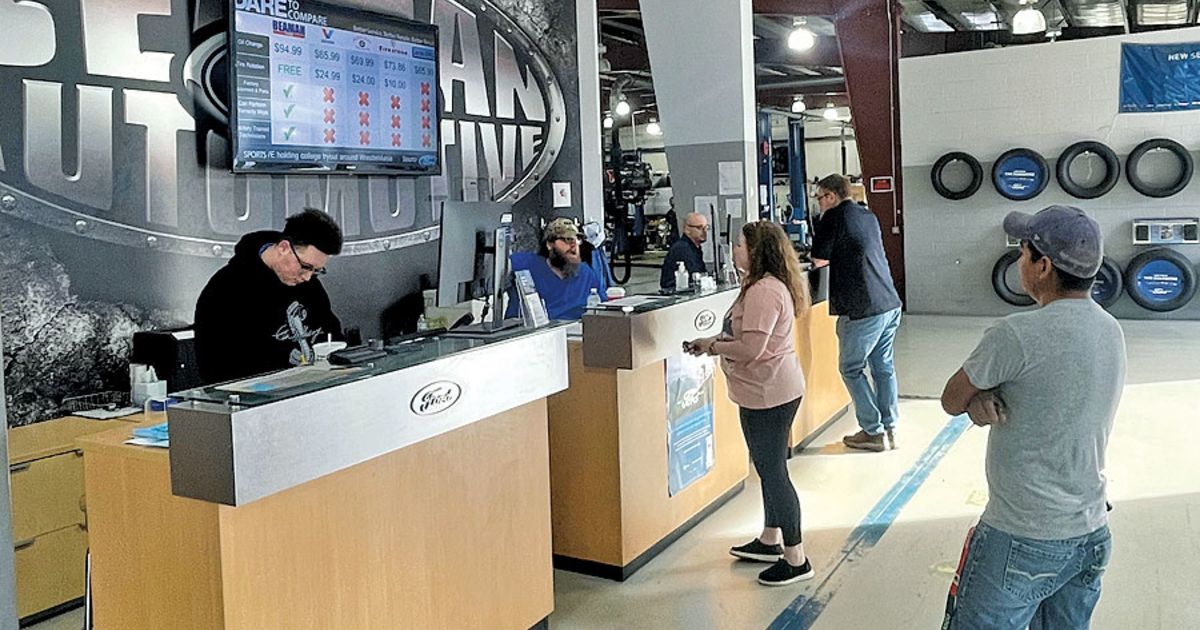 To James Stephens, using dry-erase whiteboards and lifeless posters taped to walls to promote fixed ops services is so yesterday.

But that’s not the case at the four Beaman stores, which feature sleek big-screen monitors that display attention-grabbing content in service lanes and most customer lounges, courtesy of Digital Dealership System. The company specializes in customized, in-house digital ad solutions for dealerships.

“I wanted to replace all those antiquated and less attractive in-house displays with something vibrant and welcoming — portray a more modern atmosphere,” Stephens told Fixed Ops Journal.

The transformation began in early 2017 at Beaman Ford in Dickson, about 40 miles west of Nashville. In the store’s service lane, a giant monitor features a “Dare to Compare” display, which contrasts the store’s prices for routine services with competitors’ prices.

The content can be easily changed and customized as needed, unlike posters and the like, says Todd Katcher, managing partner at Digital Dealership System.

The monitors can showcase whatever stores want to highlight — seasonal maintenance specials, a $50 gift card for taking a test drive, a solicitation for trade-ins or even gourmet coffee in the lounge, Katcher says.

On lounge monitors, customers can see status updates as their vehicles pass through the repair process as well as view commercial-free, noncontroversial and entertaining TV programming, he says.

Before adopting digital in-house ads, the Ford store grossed about $120,000 a month in service revenue. Six months after establishing the program, that number jumped to between $160,000 and $165,000 a month — about a 33 percent increase, Stephens says.

At Beaman Toyota in Nashville, which features two large monitors in the service drive and one in each of two lounges, gross service revenue hovered around $375,000 a month in 2020. Now it routinely reaches nearly $700,000 a month, Stephens notes — around an 86 percent increase.

“We get so many inquiries about our services from customers that watch those TVs,” he says. “So I absolutely think they’ve been a big factor.”

Moreover, the monitors display dealer-recommended services that harried advisers often don’t have time to thoroughly communicate to customers, he says.

“There’s usually very little digital content inside dealerships,” he says. “But we live in a digital environment.”

Digital ads also can move customers over the twin hurdles that often dissuade them from patronizing dealerships for service: price transparency and lack of communication.

“Our digital technology addresses both of those concerns,” Katcher says.

Dealers spend big bucks to get customers into showrooms to buy vehicles. But they virtually ignore service customers — a captive audience already inside the store and spending money, Katcher observes.

“Too many dealers live by the door and die by the door,” he explains. “They’re so focused on driving traffic to stores that they forget what’s going on inside the stores.

“But if you put the right tools in front of customers, maybe you incentivize them to get off the comfy couch in the lounge and take a test drive or get them to trade in a vehicle — at least start some kind of conversation,” Katcher says. “The lounge is part of the customer journey, too.”

Furthermore, the cost of in-house digital ads that move existing customers from service lanes to showrooms is significantly lower than the cost of driving new customers to stores, he adds.

A Digital Dealership System can cost anywhere from $100 to several thousand dollars a month, depending on the number of screens, the functionality dealers want and whether they’re installed by the company or the dealership, Katcher says.

The four Beaman stores spend about $900 a month on the systems, ranging from $100 for the Beaman Buick-GMC store, also in Nashville, to around $400 for the Toyota store. But Stephens says it’s a pittance compared with the return on investment.

“I know how I behave as a consumer,” Stephens adds. “If I go to a store with digital advertising, that’s what I pay attention to because it’s entertaining and engaging.”