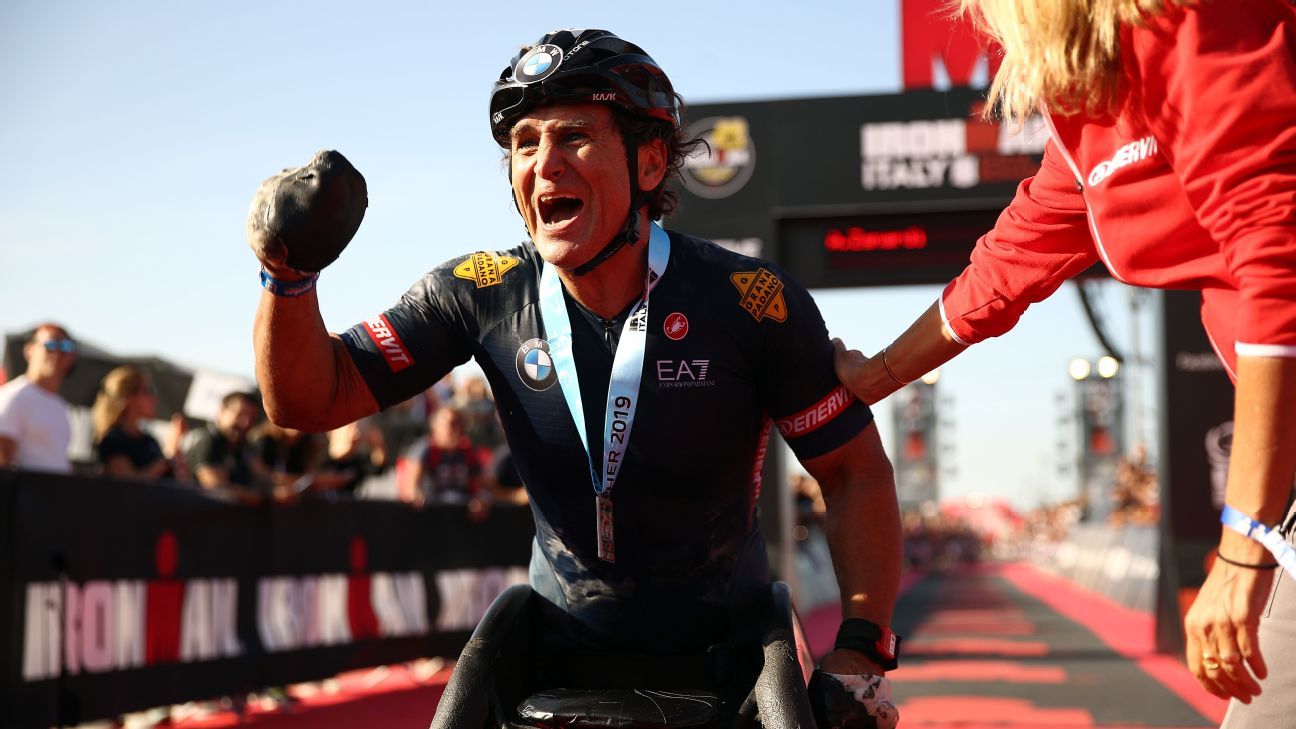 LONG BEACH, Calif. — Alex Zanardi has been invited back to the Long Beach Grand Prix time and time again in any official race role he wanted.

The Italian was informed he would be inducted into the Walk of Fame, but Zanardi was always too busy. Training for the Paralympics, hosting his popular talk show or simply content to inspire others to never give up on their life journey.

Tired of waiting to honor the beloved athlete, race promoter Jim Michaelian inducted Zanardi into the 16th class of the Walk of Fame in absentia on Thursday. Zanardi has been recovering in Italy since a 2020 crash into a truck while competing in a race on his handcycle.

“We felt it was time to get Alex the due recognition that he deserves,” Michaelian said.

He was honored by former team owner Chip Ganassi, former teammate Jimmy Vasser and Max Papis, his childhood friend from Italy and current member of IndyCar race control. The trio shared heartfelt memories of Zanardi, a two-time series champion and winner of 15 races over four seasons.

Zanardi lost both of his legs in a 2001 crash in Germany but then launched a second career in handcycling. He won six Paralympic medals — four golds — in London and Rio. Zanardi never let the loss of his legs slow him down.

“I think I talked to him one time about the accident,” Ganassi said. “And then his life moved on from there. We never mentioned his legs again. We all thought it was the end of a great career, and we didn’t realize that was not the end of a career, but the beginning of another great career. Alex strung together a life that 10 men couldn’t achieve.”

Michaelian noted that Zanardi, a two-time Long Beach winner in four career starts, invented the victory burnout after his 1997 win. The doughnut that day was rough, but Zanardi perfected the celebration through five victories that year; today, the post-race burnout is a traditional celebration in U.S. motorsports.

“It was like half a doughnut, it was terrible. But he had a lot of practice that year and started perfecting it,” Vasser said. “And all the adulation he received for it was incredible. Fans would come to us with boxes of doughnuts at the track.”

The Long Beach victory for Zanardi was the second in a string of four straight wins for Ganassi drivers started by Vasser in 1996, back-to-back wins by Zanardi and then Juan Pablo Montoya in 1999. The trio also reeled off four consecutive championships for Ganassi in that span.

In 1997, when Zanardi started the doughnuts, Vasser was the reigning champion and struggling through a winless season. The doughnuts “were starting to get a little annoying to me, actually,” Vasser admitted.

Zanardi kept his teammate motivated by trying to get Vasser to plan his own victory celebration, and Vasser joked he’d crash Ganassi’s car into the wall when he finally won in 1997. The Vasser win came in the season finale at Laguna Seca, where Zanardi finished second and clinched the championship.

“I’m coming down the corkscrew and he pulls alongside me and he’s wildly waving his arms. I thought, ‘That’s nice, he’s happy for me,'” Vasser said. “But what he was doing is waving, ‘This is the last corner! You haven’t crashed the car yet!’ So he slams into me and runs me into the wall and helped me crash the car.

“So that was the celebration. It was just the best time of my life.”

Zanardi in 2019 competed in his first Rolex 24 at Daytona sports car race in a BMW with a specially developed steering wheel and hand controls. At the time, he said he was training for the Tokyo Games in 2020.

But the man who knows no limits was injured again in June 2020 in a handbike race in Siena, Italy. Zanardi suffered severe head injuries after veering into oncoming traffic and spent 18 months hospitalized before his wife, Daniela, brought him home.

“The recovery continues to be a long process. Sometimes you also have to make two steps back in order to make one step forward. But Alex proves again and again that he is a real fighter,” Daniela said in quotes provided by BMW earlier this year.

She said that COVID-19 had made for an isolated 18 months in the hospital.

“It is important for him to be back with his family and in his familiar environment,” she said. “You also have to consider that, due to the Corona situation, Alex had only people with face masks and in protective equipment around him for one and a half years. In addition, due to the comprehensive and important protective measures in the clinic, the visiting possibilities are, of course, very restricted.”

Papis is most regularly in contact with Daniela Zanardi and passes updates on to an IndyCar community emotionally invested in their hero driver. He recalled Thursday that he’d been racing Zanardi for position in Germany before the crash and when he visited him in the hospital, Zanardi was fixated on the shoes Papis was wearing.

“He asked if they were new, I said, ‘I bought them two weeks ago,’ and he said, ‘You see! That’s a good thing! What happened to me, I will not have to spend money on buying new shoes, how can you match that?'” Papis recalled. “His life has been life-changing for so many people, especially in Italy. After his accident, he showed people that you can have another life even if you face adversity.

“He’s going through another adversity now, but I know that there is nobody better than him to show that you are not done when a curveball is thrown at you. You react to it, and you make something else happen, that’s what Alex does.”