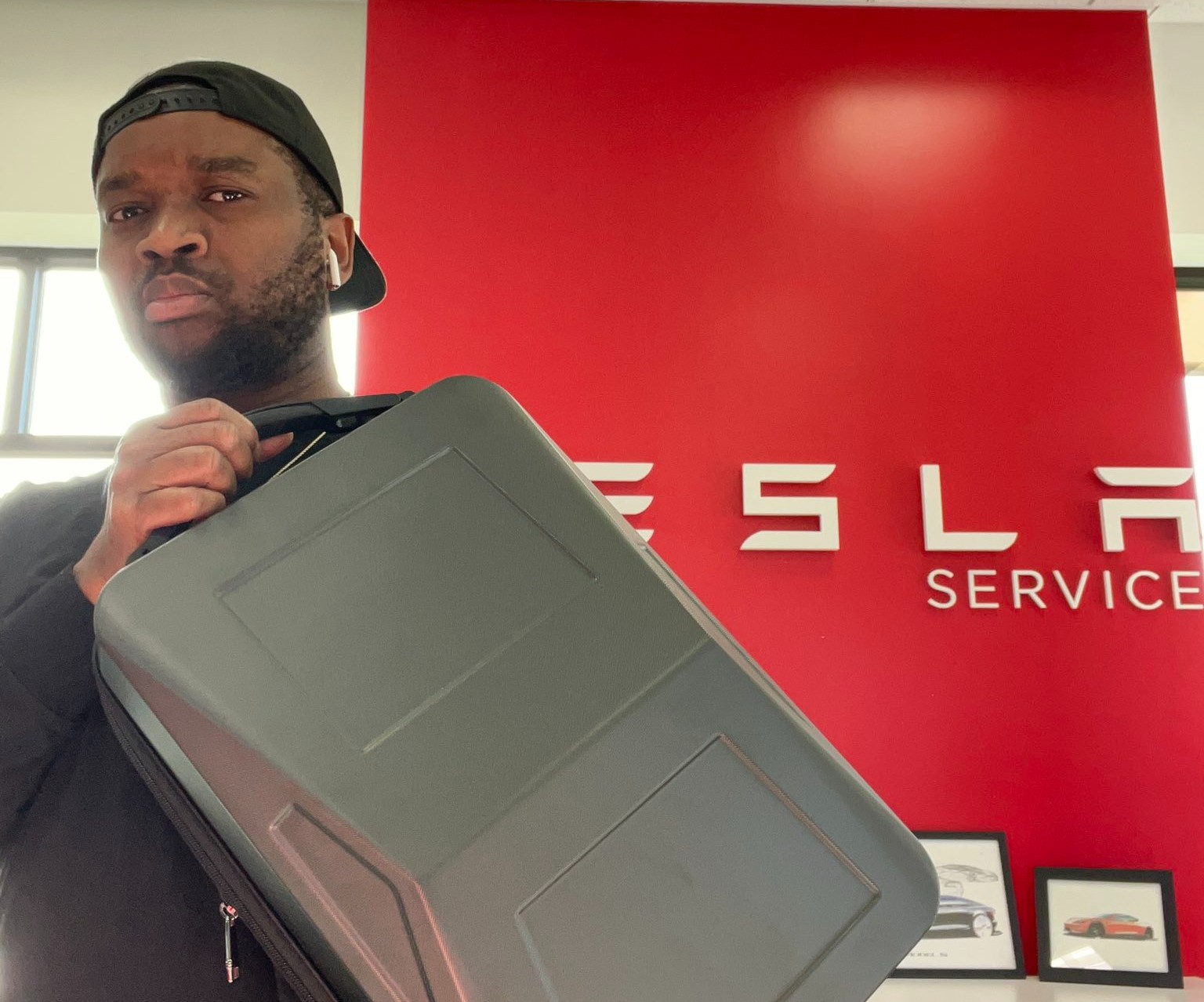 Riz Nwosu was inspired when he went to the Tesla Cybertruck unveiling in 2019. After snagging some pictures with the newly-revealed Cybertruck and company CEO Elon Musk, Riz developed a backpack inspired by the futuristic pickup he saw in Hawthorne, California, in late 2019. By December 2021, he had a prototype and a website. Less than six months later, he found Tesla had trademarked the name of his product.

Since December, Riz says he has been developing the “CYBERBACKPACK,” an idea that blossomed from a product unveiling nearly two and a half years ago. “I began designing and building what would become the Cyberbackpack,” Riz said in a blog post he published shortly after reports of Tesla trademarking the name. This all occurred just six months ago, with the first prototypes arriving at his house in March 2022. Later that month, the product would launch on ProductHunt and Spotify, as Riz had received plenty of inquiries from potential customers.

Tesla trademarks a fan’s idea for a Cybertruck-inspired backpack

In March, Riz reached out to Tesla CEO Elon Musk on Twitter and other prominent figures within the company, looking to collaborate on the idea. He felt as if the Cyberbackpack would be something both he and the automaker could benefit from. The Cybertruck, with its mass appeal and loyal following, would likely do well in a “backpack” version, and it would be a dream for Riz, who purchased his first Tesla in March 2016.

On April 5, Tesla trademarked the “CYBERBACKPACK” name, bringing some speculation that the automaker had approached the fan to purchase or collaborate on his idea. After all, Riz’s website, Cyberbackpack.com, was not active when the initial reports came out earlier this week, which only fueled the speculation that Tesla probably liked the idea and decided to approach him about it. Riz was alarmed, however, as Tesla didn’t contact him about the bag, nor his idea or the name of the product. They had instead trademarked the name of the backpack, which sent Riz into a state of confusion.

November 2019
I attended the unveiling of the Cybertruck where I got to meet Elon Musk, a person I have admired and respected for many years.

Pop Quiz: How many Africans do you see in this photo? It’s definitely not equal to one. pic.twitter.com/MTLpB4lEUA

“I decided to temporarily take the site down after receiving a bunch of orders and reaching out to Tesla,” Riz told Teslarati in a statement. “I thought it best to rework the site and get my manufacturer setup properly and then relaunch.”

Teslarati contacted several patent and trademark law firms, and representatives essentially explained Tesla may have trademarked the name to protect itself from any repercussions that could come from the product’s design. One lawyer explained to us it was a “strategic” and “defensive” strategy that Tesla may use to avoid a situation like Apple did with its AirPods. Apple had so many counterfeit AirPod designs on the market that eventually, it had to do damage control on knockoffs, as some were catching fire or having other dangerous malfunctions. The issue is that Apple could prove that consumers immediately think of “Apple” when they see designs of AirPod knockoffs. This is essentially dangerous to Apple, even though they did not create the AirPod knockoffs, because consumer sentiment relates that design to Apple, and not to a third-party company.

Tesla could technically argue the same thing, legal experts told us. People may see the Cyberbackpack’s design and immediately think Tesla designed it. If negativity were to come from that design in any way, people would likely relate the backpack to Tesla and not to a third-party company, which could damage Tesla’s name.

Riz ultimately filed his own trademark application several days ago, with a “first use” date of December 2021, when he built the website and came up with the design. A loyal Tesla fan and supporter, Riz just wants to work with the company to help fulfill the idea. “My goal is to work with Tesla on some fashion to distribute the product. That’s why I reached out initially. However if that does not happen, then I would like to continue marketing and selling on my site,” he told us.

After Tesla trademarked ‘CYBERBACKPACK,’ the product’s inventor sits at a crossroads