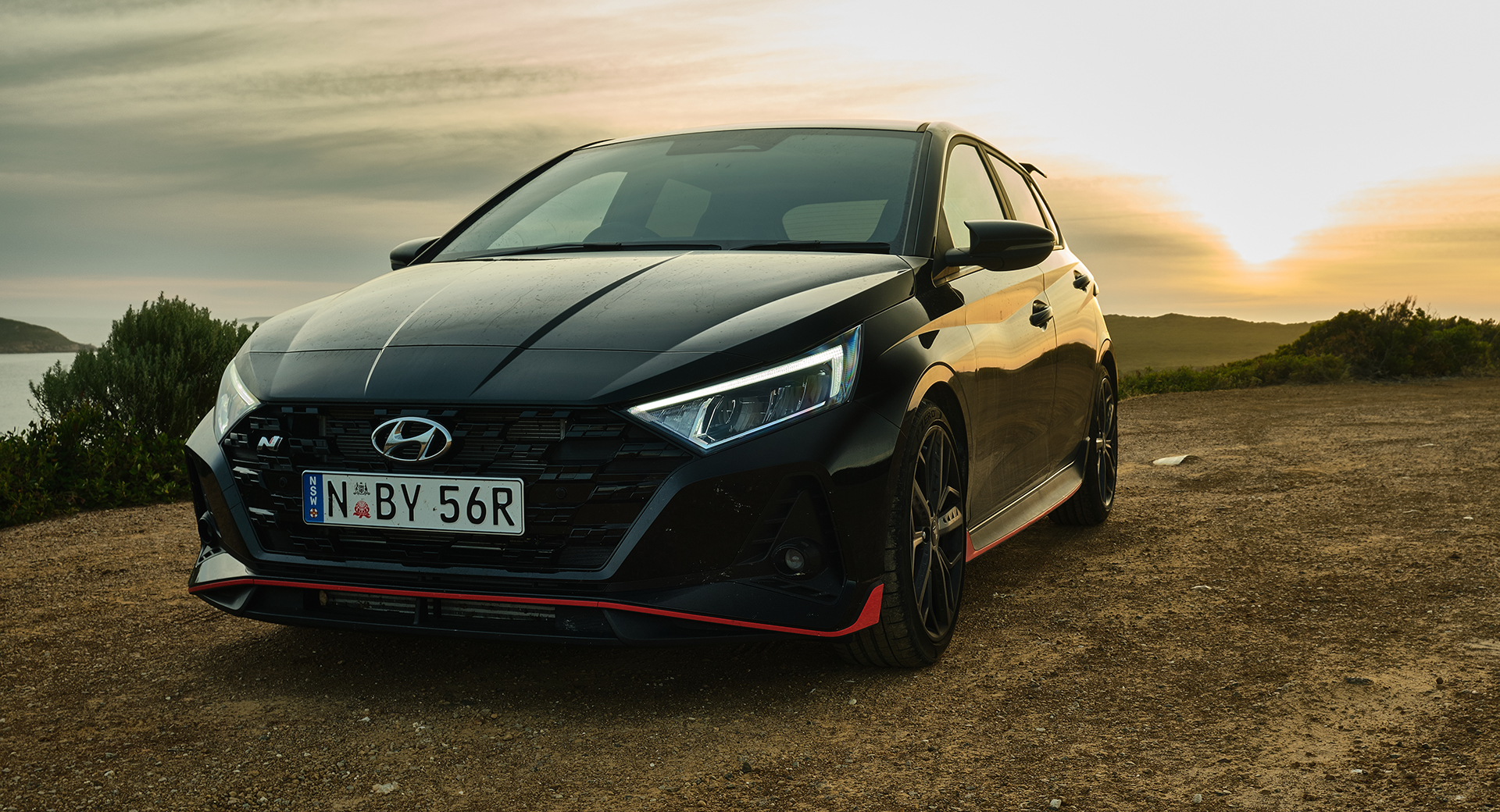 Unless you’ve been hiding under a rock for the past six months, you’ll know that the Hyundai i20 N has received praise from journalists and owners around the world and been lauded as one of the rare hot hatches that can actually rival the acclaimed Ford Fiesta ST.

Earlier this year, CarScoops’ own Chris Chilton put the i20 N to the test on the Anglesey Circuit and eager to get our hands on the hatch here in Australia, we also tested it out but did things a little differently. Rather than putting it through its paces on the track where we suspect only a minority of owners will venture, we instead embarked on a 1300-mile (~2,100 km), week-long road trip to see what the most compact of Hyundai N models can do.

Our journey took us from the world’s most isolated city, Perth, all the way to Esperance, a small town on the South Coast of Australia that’s widely regarded as having some of the finest beaches in the country. It was a journey that tested the i20 N along all kinds of road surfaces and weather conditions and proved that in addition to being a capable track toy and canyon carver, this pocket rocket is well suited to long, arduous road trips. 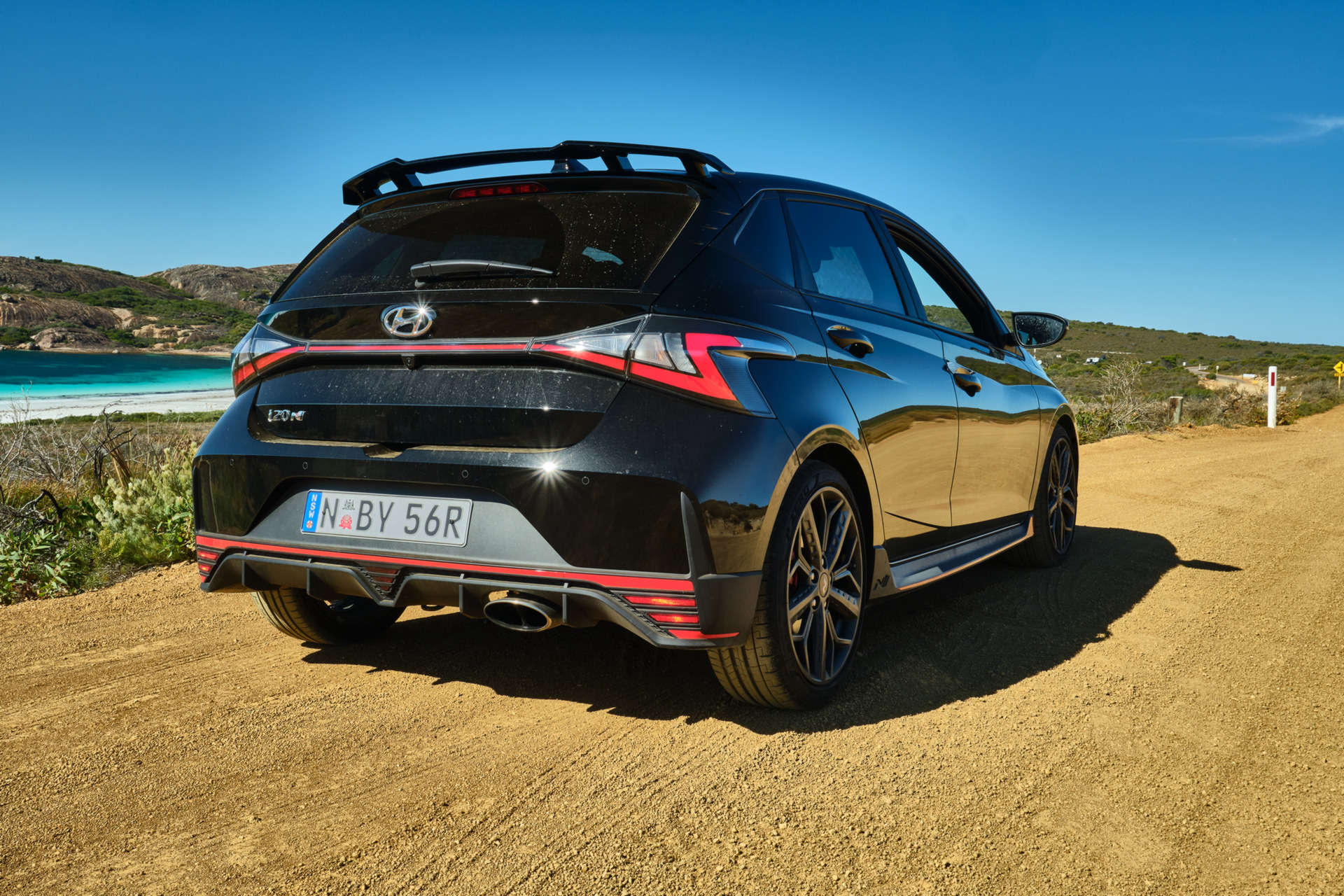 The latest in a long line of impressive N cars

Hyundai launched the 2022 i20 N in Australia in mid-November last year. It sits at the base of the N range that also includes the i30 N, Kona N, i30 Fastback N, and i30 Sedan N (also known as the Elantra N in the United States). While the i20 N is pint-sized, it is still seriously impressive. 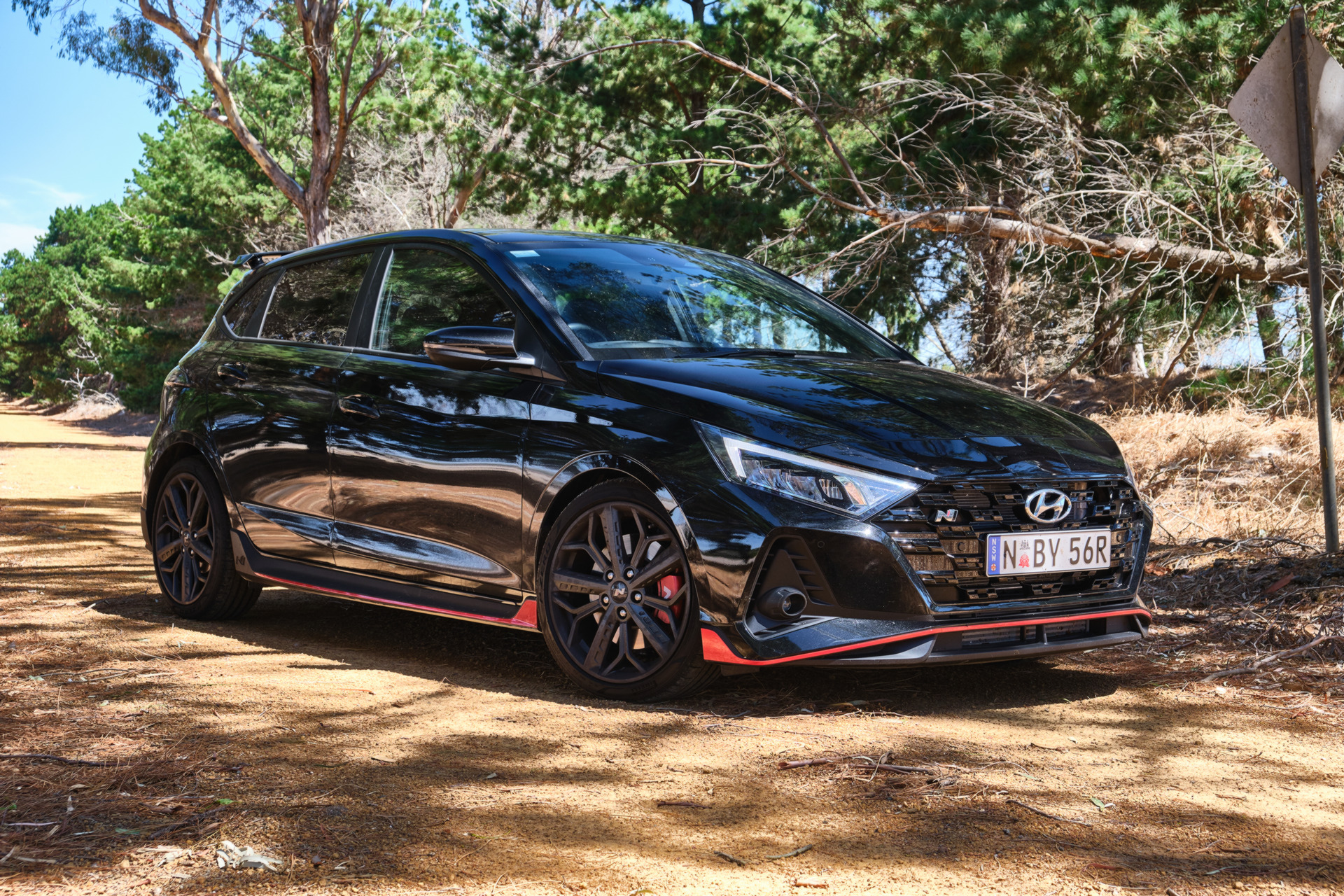 Mated exclusively to this engine is a six-speed manual transmission driving the front wheels through a mechanical limited-slip differential. Hyundai Australia quotes a curb weight varying between 1,210 kg (2,667 lbs) and 1,235 kg (2,722 lbs) and states that the i20 N averages 6.9 l/100 km (34 U.S. mpg) over the combined cycle. A set of 18×7.5-inch wheels come standard and they are wrapped in 215/40 Pirelli P Zero HN tires.

Hyundai’s engineers have also equipped the i20 N with a plethora of features designed to make it especially engaging for drivers. For example, it features a launch control system that helps it hit 100 km/h (62 mph) in as little as 6.2 seconds. The car won’t stop accelerating until it hits 230 km/h (143 mph). It also features an automatic rev-matching function with Normal, Sport, and Sport+ settings, an active variable exhaust, an electronic sound generator, and the N Road Sense function that detects road signs indicating curved roads and prompts you to switch into N mode. 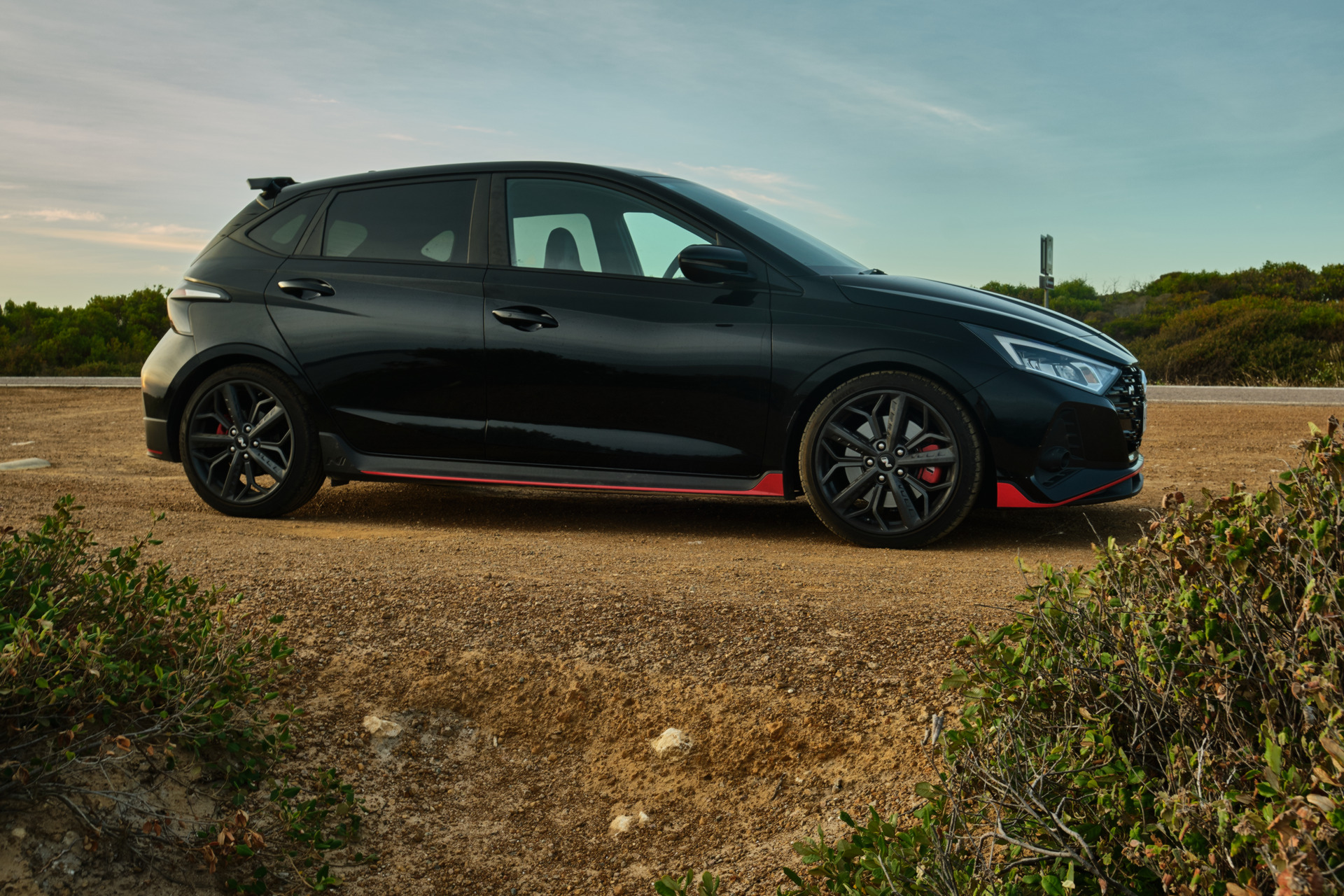 Time for an adventure

Our journey in the i20 N started at approximately 6:30 a.m. on a Wednesday morning in February. The aim was to drive to our accommodation in Esperance some 728 km (452 miles) away, a journey that takes a touch over eight hours.

After getting familiar with the car the day prior to our trip, we started the long drive that’s roughly the equivalent of driving from Bruges, Belgium to Leipzig, Germany or San Francisco, California to San Diego. The key difference between those journeys is that rather than passing through multiple European countries or a number of staggering national parks in California, the trip from Perth to Esperance takes you across flat farmland, mining sites, and very little else. 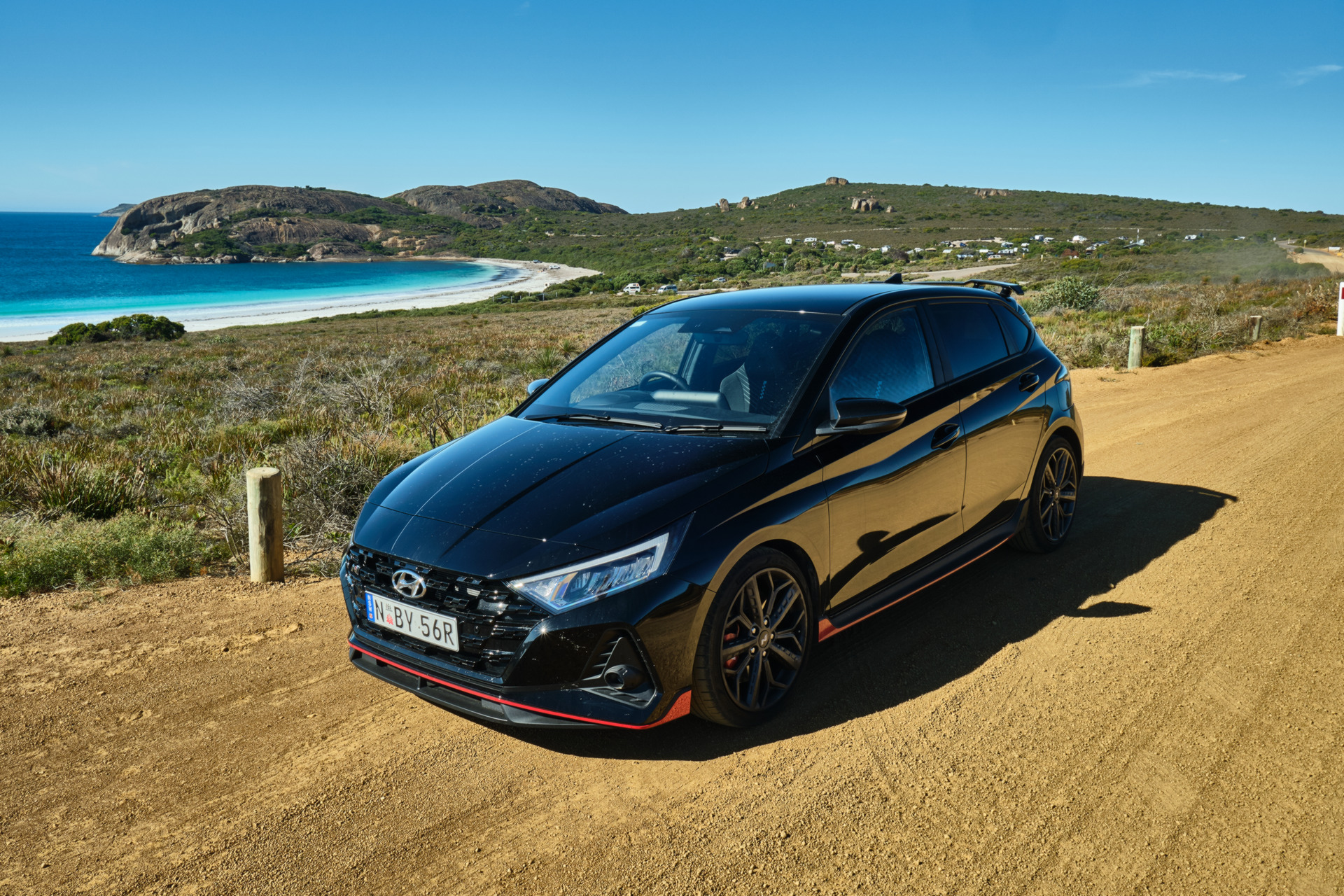 After leaving the city, we jumped onto the Great Southern Freeway through the state forests to the east of Perth bound for our first stop in the remote town of Hyden, the location of Western Australia’s famed Wave Rock. With the miles ticking by, we were quickly able to notice some pros and cons of taking a car like the i20 N on a road trip.

What’s good and what’s not so good?

First, a positive. The hot hatch comes standard with a seven-speaker Bose sound system that sounds excellent and provided good clarity for both music and podcasts. What’s not so good are the seats. For the vast majority of driving scenarios, the sports seats are great, providing good bolstering and plenty of adjustment to find your perfect driving position. However, after 90 minutes or so, my butt would start to get soar. Now you may say “That’s bound to happen, these are sports seats after all.” You’re not wrong, but the decade-old Recaro CS Sportster seats of my Renault Clio RS 200 AGP are more comfortable on long journeys, despite being thinner, lighter, and appearing to be more hardcore.

The suspension is also worth discussing. A key difference between the i20 N and all other N products is the fact that it does not have electronically adjustable suspension and instead has a fixed setup. That means there’s no way to change it into a ‘Comfort’ mode for long journeys and into a rock-solid ‘N’ mode when you want to have some fun. Fortunately, Hyundai’s engineers have done an excellent job of tuning the suspension to ensure it is firm enough for performance-focused driving without being too harsh, even over poorly maintained highway roads that stretch on for hundreds of kilometers. It’s no Rolls-Royce but it’s certainly more compliant than an i30 N in its harshest Sport and Sport+ modes. 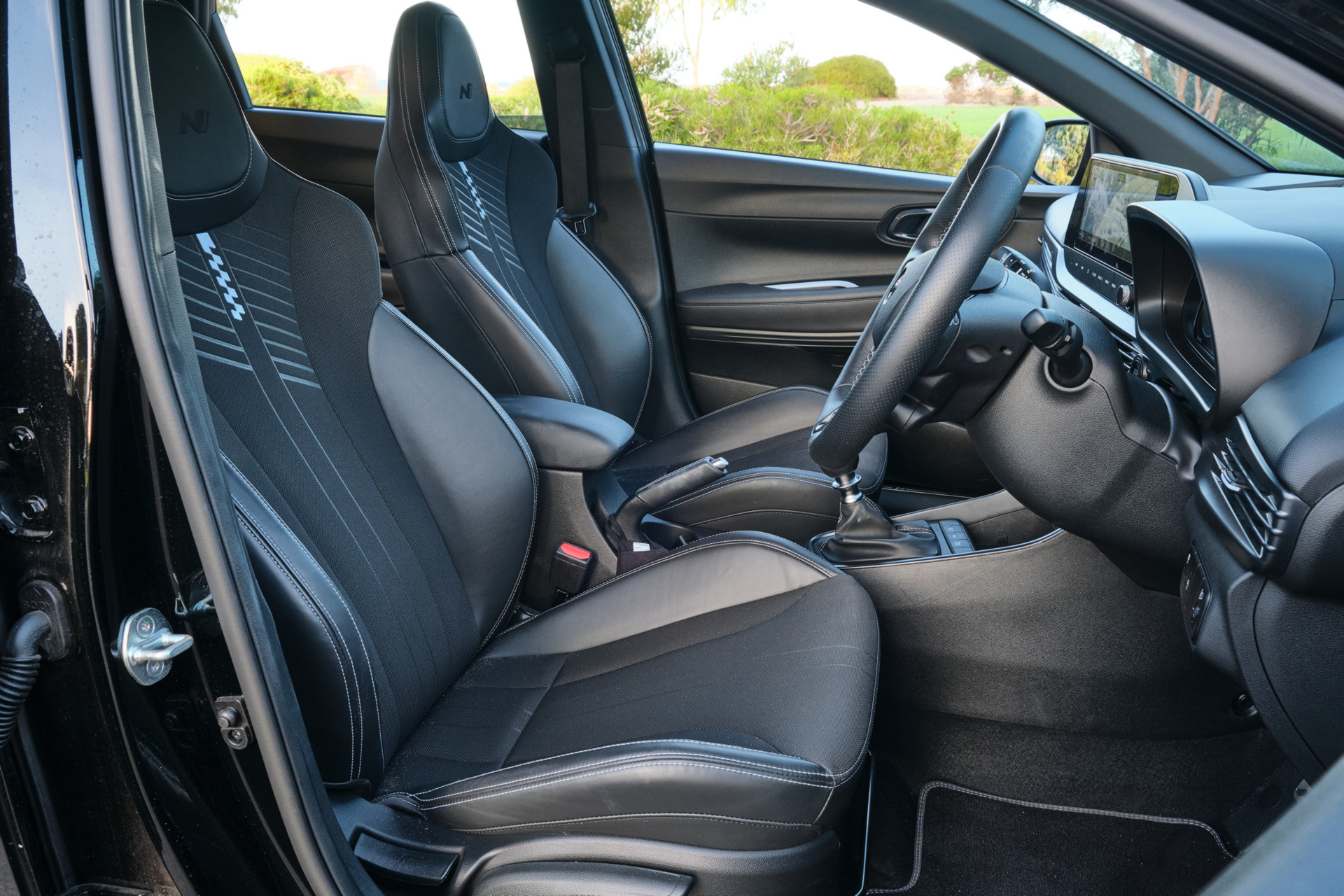 Before long, we arrived in Esperance. My butt was sore and my lower back was a little stiff but other than that, I felt fresh, no doubt helped by the fact that the active steering and lane-keep assist systems made driving that little bit easier.

A car that thrives in all kinds of conditions

Over the following few days, we visited some of the spectacular beaches and national parks around the town, and also had the opportunity to test the i20 N out on some tighter and more thrilling roads, including the picturesque Great Ocean Drive (pictured below). 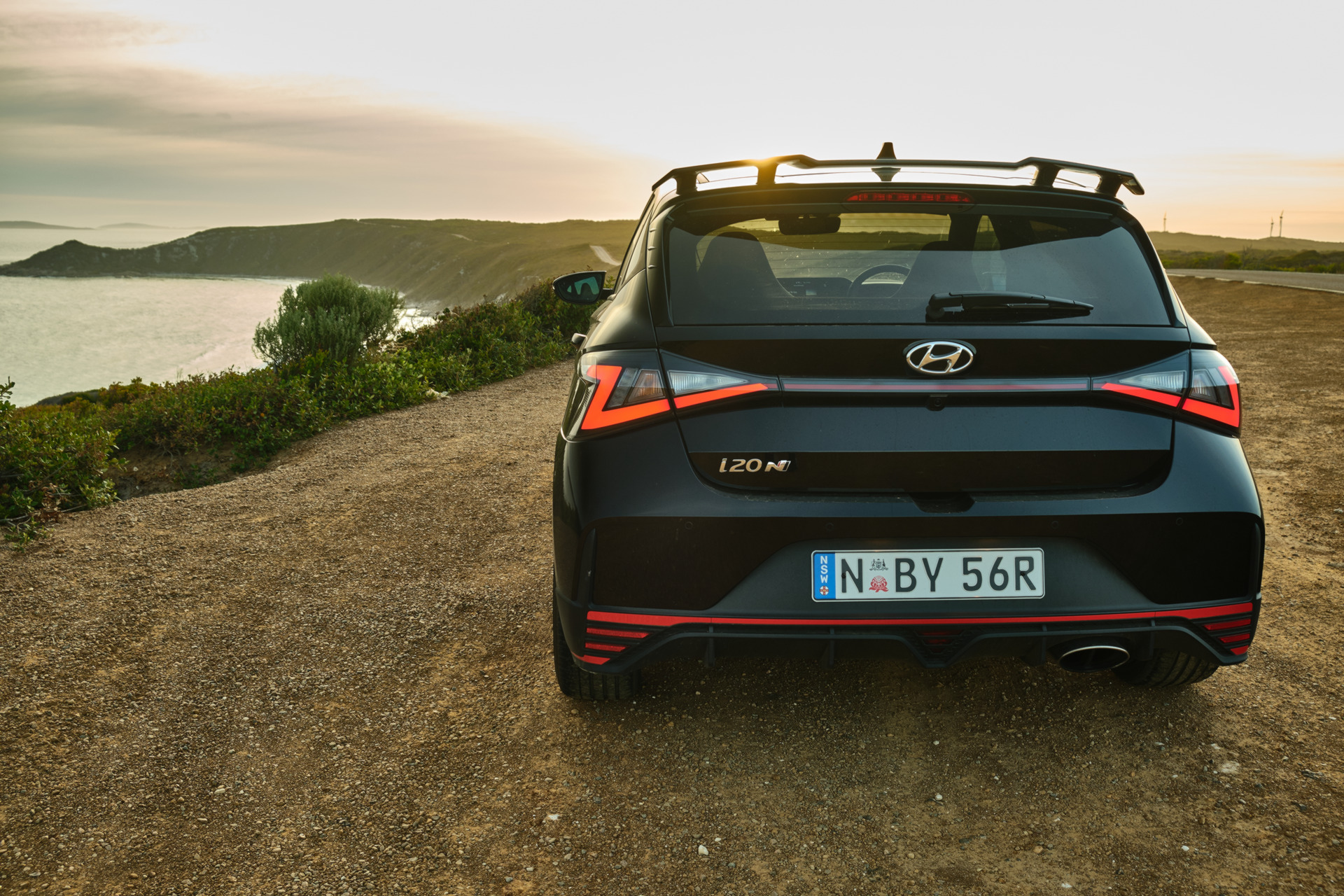 When driven at its limit, the i20 N is superb. Like the i30 N, the shifting action is beautifully crisp and the clutch pedal is well-weighted. Grip is absolutely tenacious.

In addition to lacking electronic suspension, the i20 N also lacks the electronic limited-slip differential of its siblings and instead uses a more traditional mechanical LSD. While this system doesn’t offer the same levels of adjustability as the eLSD, it does help the hatch sink its claws into the pavement, pulling you around the tightest of corners and allowing the driver to pin the throttle halfway through a turn without having to worry about the slightest hint of understeer.

The steering is also well-weighted and whereas in the i30 N you’ll need arms of steel to routinely drive with the steering set to its heaviest setting of Sport+, the Sport+ mode of the i20 N is much more manageable. In fact, I had it in that mode for most of my week with the car.

The punchy 1.6-liter turbocharged four-cylinder is a firecracker of a thing and this is no more evident when using the launch control. Press the brake, pin the throttle, release the brake and even on the driest of roads, you’ll spin up both front tires and leave thick black marks on the pavement behind you. Figures of 201 hp (150 kW) and 224 lb-ft (275 Nm) match up well against the Fiesta ST and the i20 N pulls strong in all gears. However, this isn’t the most characterful four-cylinder out there and at full throttle, it produces a metallic rattle that’s quite unpleasant. The adjustable exhaust somewhat makes up for the engine noise. 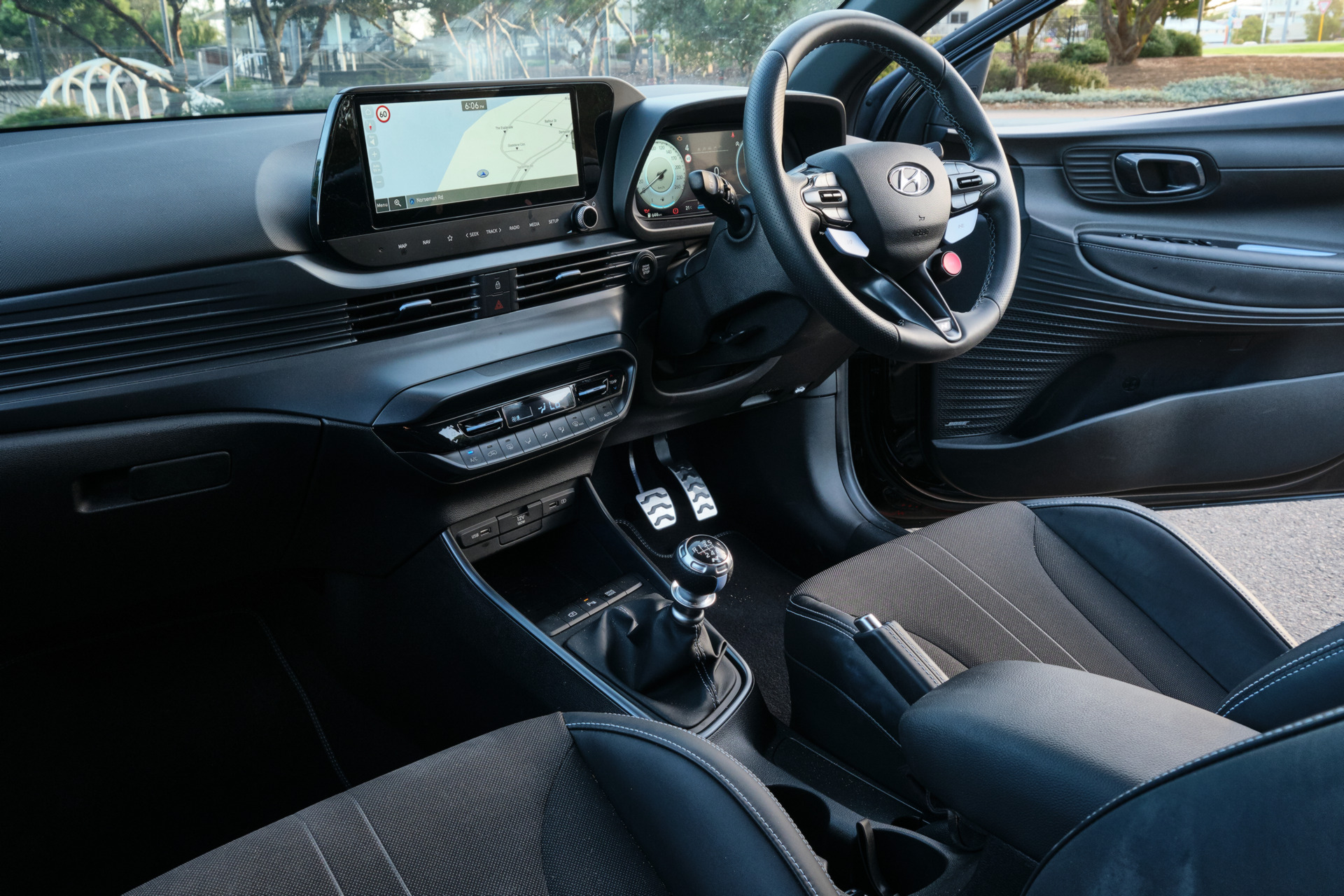 Throughout my week with the i20 N, I was also pleasantly surprised by just how nice the interior was. While it doesn’t feel quite as premium as the i30 Sedan N / Elantra N (nor did I expect it to), it definitely feels more premium than the more expensive but older i30 N hatchback. For starters, the 10.25-inch infotainment screen is better incorporated into the dash than the i30 hatchback and it is also angled towards the driver. The plastics adorning the dashboard and door panels also feel less scratchy than its bigger brother. The excellent 10.25-inch digital instrument cluster is also something that the i30 hatch is lacking.

Is this the hot hatch to buy?

The Hyundai i20 N is an excellent car, there’s no doubt about it. It performs well in all conditions and handled our roadtrip with more poise than we had expected. It is hugely engaging and feels just as happy cruising down a highway as it does when you grab it by the scruff of the neck and hustle it through some corners. It’s not quite as playful as a Fiesta ST but few front-wheel drive hatchbacks are. Instead, it feels a little more mature and well-rounded. It could very well be the best bang-for-your-buck model in the Hyundai N family. 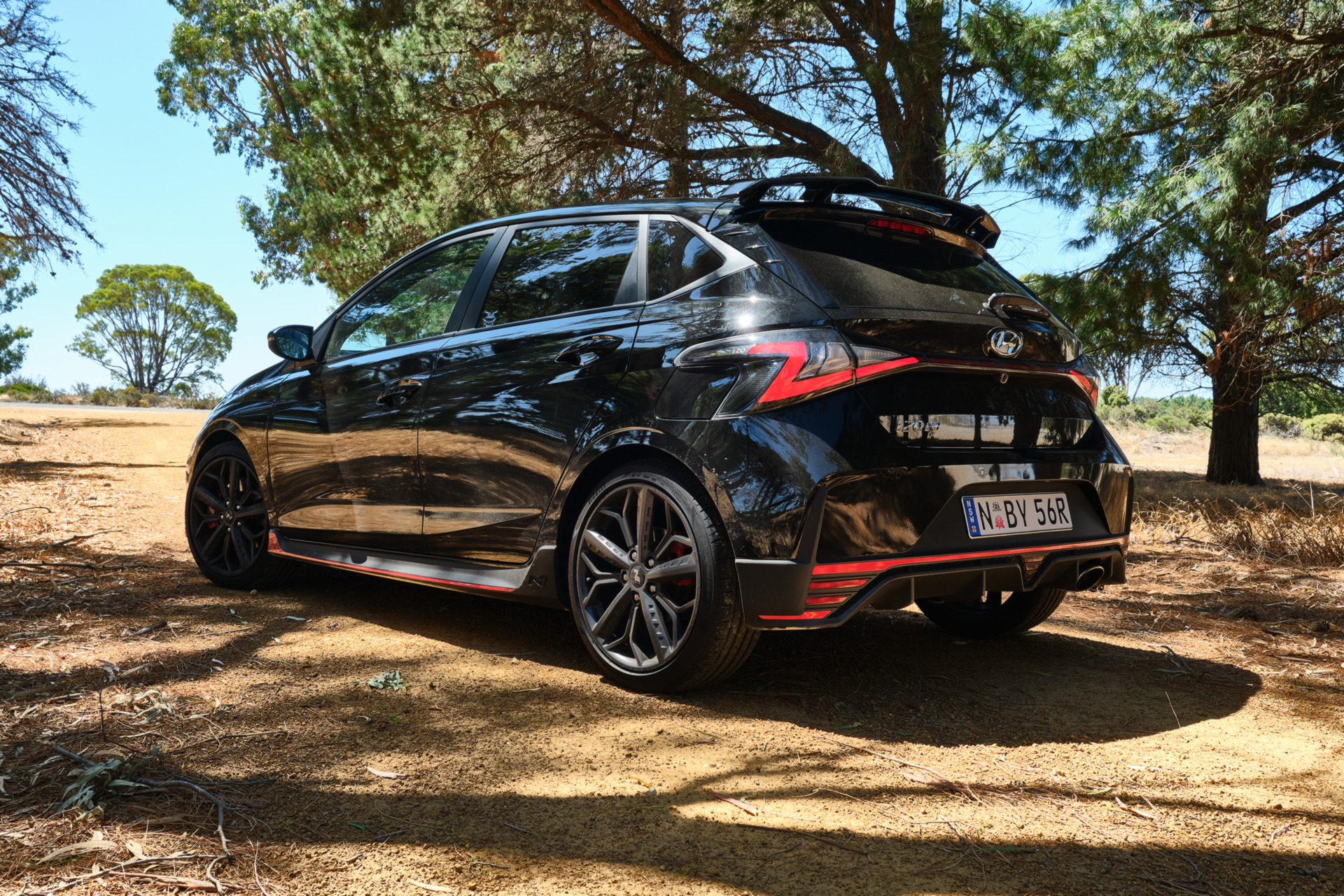